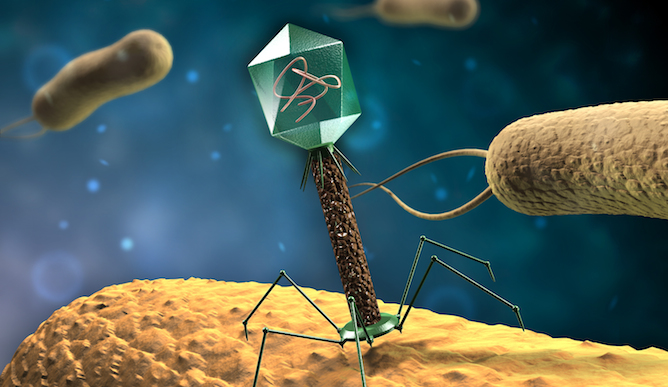 Image of bacteria growing via Shutterstock.com

One of the leading causes of preventable death in the developed world is too small to see with the naked eye. This potent threat comes from “superbugs” – strains of bacteria that have morphed into a state of resistance against manmade antibiotics. No sooner is a new drug released than the cunning little microbes find a way to defeat it.

Scientists the world over are searching for the ultimate weapon in this battle that the World Health Organization named one of the three greatest threats to public health. New research out of Israel has revealed a protein made by a bacteriophage, a virus programmed naturally to kill bacteria.

The isolation of this phage protein is a major step toward developing a substitute for conventional antibiotics.

“To stay ahead of bacterial resistance, we have to keep developing new antibiotics,” said Udi Qimron of Tel Aviv University (TAU) medical school’s department of clinical microbiology and immunology, whose research team included Israeli and American scientists. “What we found is a small protein that could serve as a powerful antibiotic in the future.”

The results of the bi-continental study, published in Proceedings of the National Academy of Sciences, came out of a collaboration involving Qimron, Ido Yosef, Ruth Kiro and Shahar Molshanski-Mor of TAU; and Sara Milam and Prof. Harold Erickson of Duke University in North Carolina.

Bacteriophages, often referred to as “phages,” are viruses that infect and replicate in bacteria and are optimized to kill them. Phages may be microscopic, but they are the most common life form on earth, outnumbering bacteria 10 to one.

In places like the former Soviet Union, phages have been used to treat bacterial infections for the past hundred years. Harmless to humans, they inject their DNA into bacteria and rapidly replicate, killing their hosts.

“Ever since the discovery of bacteriophages in the early 20th century, scientists have understood that, on the principle of the ‘enemy of my enemy is my friend,’ medical use could be made of phages to fight viruses,” said Qimron.

This approach has become ever more relevant over the past 60 years, as the misuse and overuse of antibiotics has pushed more and more bacteria to become aggressively resistant to the wonder drugs that form the basis of modern health care.

Israeli scientists have made some significant contributions to the war on superbugs. The late Prof. Nathan Citri developed a medical kit that identifies various resistant bacteria at a hospital patient’s bedside, fast enough to find an appropriate remedy and prevent an outbreak.

Qimron, with another TAU colleague, previously formulated a powerful cleaning solution for hospital use, fortified with genetically engineered bacteriophages.

For the current research, Qimron and his colleagues set out to understand how all 56 proteins found in T7, a particularly lethal phage that infects E. coli bacteria, contribute to its functioning.

They discovered that one of the proteins, called 0.4, causes the cells of the bacteria to elongate and then die. This protein is common to many different types of bacteria.

Although bacteriophages have not been approved in Western medicine for treating systemic bacterial infections – mainly because they do not penetrate body tissues effectively — the 0.4 protein is much smaller than a whole phage. Therefore, Qimron believes it should be able to get into the tissues to do its deadly work.

For this to happen, pharmaceutical companies will need to take the team’s findings and figure out how exactly to deliver the protein as a drug. Qimron, meanwhile, continues to hunt for other proteins that kill bacteria.