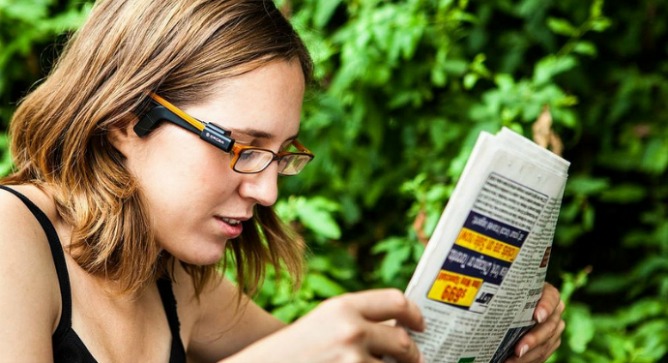 Liat Negrin is happy to demonstrate a new Israeli technology that “sees” and reads for her. She is visually impaired with coloboma, a birth defect that affects one in 10,000 people globally.

Wearing an OrCam device clipped to her glasses, Negrin — who works for the company — can now do the smallest things that sighted people take for granted.

Just by pointing her finger at objects and listening to the device read the words and numbers, she can hand over money at the store without fear of being shortchanged. She can easily step on the right bus as it approaches her stop. And she can “read” the ingredients labels on products at the supermarket.

OrCam gives her more freedom in and out of the house, and is aimed to do the same for the estimated 21 million Americans over 18 with visual impairments. Click on the ISRAEL21c video to find out more.

Costing about the same as a good hearing aid, the OrCam device is able to identify thousands of objects, including the faces of loved ones, dogs, buses, newspaper text and store signs, all with the point of the finger. Its voice system transmits the information to the wearer’s ear.

“What we found during user studies is that people reach their retirement age and then start losing their sight. They go to the doctors to update their glasses and at some point the doctors can’t help anymore,” Yonatan Wexler, the company’s head of R&D, tells ISRAEL21c.

This is where OrCam comes in. Wexler says the device was designed to be a reliable, sturdy and straightforward tool for navigating everyday life.

Users can learn the OrCam system in about one minute, he says. Wexler’s team recently tried it on an 18-year-old Israeli teen blind since age five. They asked him if he wanted to read the newspaper, and he said yes, sarcastically. 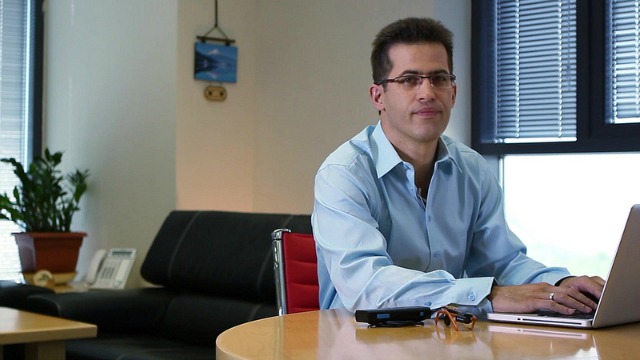 “No existing system could detect this huge amount of objects and do it on a small platform,” says OrCam’s Yonatan Wexler.

“He put on the device, ‘read’ the newspaper and started to cry,” Oxford-educated Wexler recalls.

The 25-person company, founded in 2010 in Jerusalem, is based on research by Hebrew University Prof. Amnon Shashua, founder of Mobileye, a successful Israeli company whose driver-safety system is being installed in cars worldwide.

But unlike the Mobileye system, which needs to identify only cars and pedestrians, OrCam needs to recognize thousands of unique objects in the surrounding environment in real time.

This is a huge technological feat, Wexler explains: The amount of processing power would require a room full of servers.

“No existing system could detect this huge amount of objects and do it on a small platform,” Wexler tells ISRAEL21c.

“One or two, maybe. Or 10? But the amount we are working with would need more computing space than a server. We’ve developed a system, where after teaching it one thing, it takes less time recognizing it in the future.”

The device uses artificial intelligence and special algorithms built into a small computer, powered by a camera and a long-life battery.

Focused on a human problem

Theoretically, OrCam could be implemented into any array of systems that need visual identification when the user can’t see, even if there is no user present. The device could be connected with hearing aids and cochlear implants. However, the technology would not integrate with Google Glass or smartphones, since it requires more computing and battery power to run all day.

The possible uses for this groundbreaking technology are almost endless. But the company founders needed to start somewhere, and so they decided to tackle an area that could benefit humanity. “We wanted to find something with real value,” Wexler says.

The device is currently for sale through the OrCam website and retails for $2,500, including customer support. The company sold out its first hundred trial offerings within 24 hours and they are being shipped out now. Any new orders made should be shipped by the end of the year.

The system is to be tweaked according to feedback from early adopters.

OrCam comes pre-installed with objects it already recognizes, and can learn from the user to recognize new ones. It will be able to adapt to new languages, although for now it reads in English only.

UNCOVER ISRAEL - Get the ISRAEL21c
Weekly Edition free by email
Sign Up Now!
Bring Israel's story to life.
Millions of people around the world rely on us to gain a deeper understanding of Israel. We are the trusted source for original content you won't find anywhere else.
You can make a difference. Donate today to support journalism that brings Israel’s story alive.
SUPPORT ISRAEL21c
Read more on:   Health, Medical devices, Living, OrCam, Vision technologies