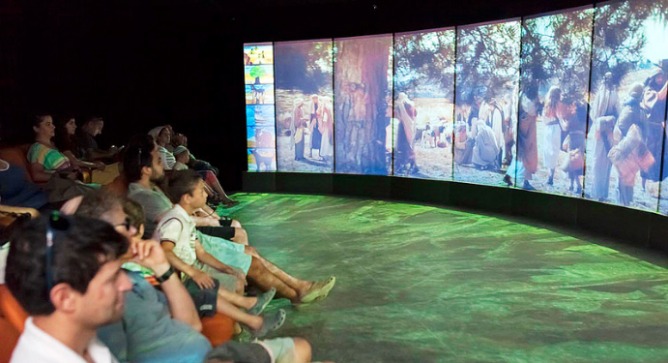 Gauzy glass is being used in the visitor’s center at the biblical archaeological site of Shilo, north of Jerusalem.

As you enter the elevator at the Aish HaTorah yeshiva in the Old City of Jerusalem, you’d never suspect that you were about to experience the future of glass technology. But as the car rises from the first to the fifth and final floor, its walls gradually transform, from what seemed at first to be solid and opaque to entirely transparent.

When the elevator ultimately comes to a halt on the rooftop of the building, you are surrounded by clear glass – and a stunning view of the Western Wall.

The glass used in Aish HaTorah’s morphing elevator is super-charged with next-generation liquid crystals developed by Gauzy, an Israeli firm that is revolutionizing the way glass can be used in all manner of construction projects – from windows in offices that can be dimmed with the touch of a button, to eco-friendly refrigerators that go transparent so you can see what’s inside without opening the door and wasting energy.

Gauzy (“translucent”) seems to be on to something: The company just raised $4 million from the British firm Sollange Investments.

Gauzy plans to use that money to open a factory in Israel for producing its special liquid crystals – the first of its type in the Middle East and one of the only such plants outside of the Far East. Gauzy plans to double its current workforce of 10 to accommodate the new line. 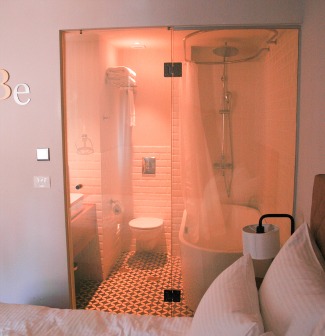 Gauzy glass in use at a hotel in Tel Aviv.

ISRAEL21c asked Gauzy CEO Eyal Peso to explain how his company’s technology works — without getting too deep into the intricacies of electrical engineering and complex chemistry.

In short, Gauzy builds a specialized control system to generate an electromagnetic field that passes through the same kind of liquid crystals that make up today’s TV and computer screens. This changes how much light the liquid crystals can let through. The crystals are then laid out in a sheet and laminated between two pieces of regular glass, which can be cut and sold in the same way as ordinary glass.

Dialing up and down the opacity can be done through as simple a device as a wall-mounted dimmer or as sophisticated a unit as a touch screen with advanced options for timing and color.

The range of applications is breathtaking.

Imagine a hotel room where the bathroom and bedroom are separated by a Gauzy-controlled glass wall. If you want privacy, you make it opaque; if you want a feeling of spaciousness, go more transparent. Gauzy is working with the Ritz-Carlton in Herzliya and the new Waldorf-Astoria in Jerusalem on exactly such a project. (Similar walls in the Mamilla Hotel across from the Waldorf were made by a French company). 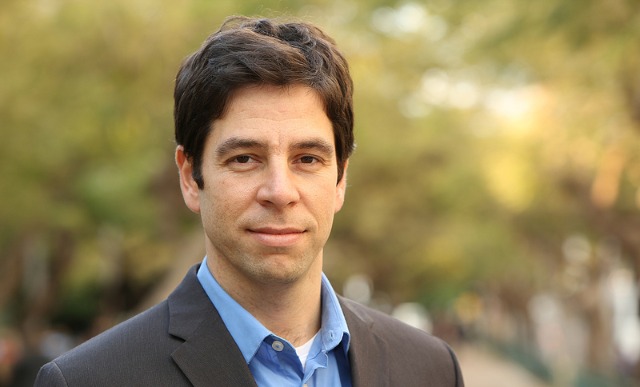 Or how about the backseat of a car? The driver can provide protection from the sun for kids sitting in the rear without having to reach back and pull down a shade.

Gauzy projects are popping up all over Israel, including in the visitor’s center at the biblical archaeological site in Shilo, north of Jerusalem. As the audience gathers around the screen to watch a movie about the excavation, the screen becomes semi-transparent, superimposing computer-generated graphics over the actual site behind it.

Building for the World Cup?

Peso, 33, says he came up with the idea for Gauzy from an apartment he owns in central Tel Aviv.

“The wall behind the kitchen in the apartment is made entirely out of glass, but it is all frosted, so you can’t see through it,” he says. It also faces a beautiful tree-lined street. Peso began to wonder if there was a way to make that glass transparent when he wanted.

Fortunately, Peso and his co-founders, who all worked previously at the Israeli tech company Alvarian, had the smarts to envision how this might work. Gauzy was established in 2009 and the company now has partnerships with manufacturers in Australia, Romania and Brazil. 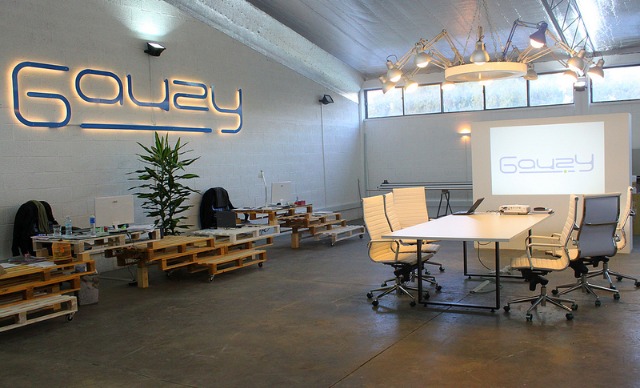 Because Brazil will be hosting the World Cup in 2014 and the Summer Olympic Games in 2016, there should be a significant amount of new construction relevant to Gauzy.

Consumers can’t just walk into a hardware store and ask for Gauzy glass, though. The company sells its chips to glass manufacturers. At up to $1,500 per square meter, it’s not yet a mass-market commodity. But, says Peso, “the more we sell, the faster the price will come down.” Having its own production facility in Israel will bring added efficiencies.

Glass processors are engaged in a tough battle with cut-rate Chinese manufacturers; adding a line of smart products “helps manufacturers and gives them a new source of revenue.” And for new construction projects looking to differentiate their offerings, use of dimmable glass adds a luxurious sheen.

Peso doesn’t have his transparent kitchen yet – he’s moved to a larger place and is renting his old apartment out. But he’ll be back, and the future is liquid-crystal clear.

UNCOVER ISRAEL - Get the ISRAEL21c
Weekly Edition free by email
Sign Up Now!
Bring Israel's story to life.
Millions of people around the world rely on us to gain a deeper understanding of Israel. We are the trusted source for original content you won't find anywhere else.
You can make a difference. Donate today to support journalism that brings Israel’s story alive.
SUPPORT ISRAEL21c
Read more on:   smart glass, Gauzy, Environment, Technology, Innovation, Eco-Living