A new non-invasive test to aid in early detection of lung cancer may soon be available, thanks to an agreement between Israel’s BioView and a leading California laboratory.

Smokers and others at risk of lung cancer typically get a CT scan to look for nodules that could be malignant. Small ones are too hard to biopsy, so the only choice is to go back for another CT scan every few months. But that exposes the patient to more radiation and also allows the potential cancer to grow.

That’s one reason why lung cancer has the highest fatality rate of any cancer in the world. In the United States each year, more than 250,000 new cases are diagnosed and more than 160,000 lung-cancer patients die. Non-small-cell lung carcinoma, the form that would be detected by the new test, accounts for 85 percent of all lung cancers.

The BioView test can help determine whether an immediate biopsy is needed or if it’s safe to wait and see. 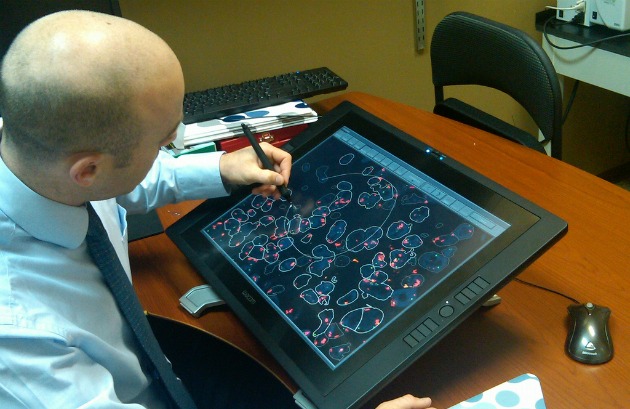 “It can be an additional piece of information for caregivers to decide what to do next,” says Schwebel. “People in the stage of suspected lung cancer would be happy to have it better defined quickly.”

BioView has started clinical trials at Tel Aviv Sourasky Medical Center and two US hospitals at the same time that OncoMDx is developing the lab test. The California company has an exclusive option to develop and market the product, which could bring in annual revenues of $80 million to $200 million.

Schwebel says initial results from the trials are expected this year, but it’s already been shown that the test performs better than any existing non-invasive methods for aiding the early diagnosis of lung cancer.

BioView’s proprietary algorithms sort out the lung cells from mouth and upper respiratory tract cells in the patient’s sample. Then, the fluorescent FISH biomarkers are applied to the slide so that the technician can easily analyze the previously identified lung cells. The results of the scan are reviewed by the caregiver on BioView’s Solo-Touch offline workstation.

“What we found in studies was that if a certain percentage of the cells show abnormal fluorescent patterns, then the subject most likely has lung cancer,” says Schwebel.

Though it would be tempting to develop this test as a standard screening methodology, Schwebel says it’s too costly and labor-intensive to use in that way. So it will be earmarked for patients already known to have a pulmonary nodule.

Founded by Dr. Opher Shapira and Yuval Harrari, the publicly traded BioView aims to become the leader in the laboratory equipment market for cancer screening and monitoring.

Schwebel, who joined the 12-year-old company in 2002, notes that “in both 2010 and 2011 we’ve seen nice increases in sales, and we have been profitable to the tune of over a million dollars in each of those years.”

BioView employs 18 people at its corporate offices in Rehovot, which handles R&D, marketing and production. An additional 10 people offer sales and service in North America through a fully owned subsidiary outside Boston.