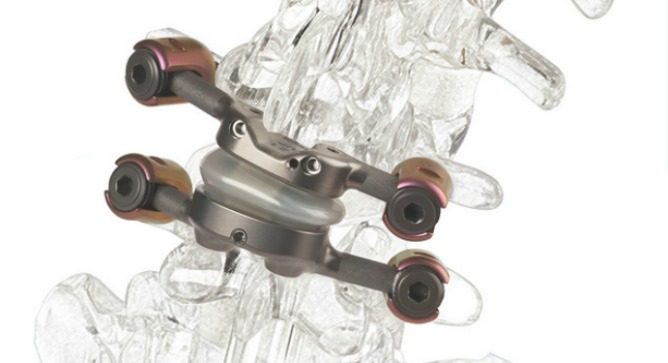 Instead of spinal fusion, the device allows for pain-free mobility.

One of the most common causes of back pain is spinal stenosis of the lower back – a narrowing of the spinal canal that causes pressure on the spinal cord and nerve roots. Fixing the problem usually involves spinal fusion, an operation to permanently join two or more vertebrae bones so there is no movement between them.

The Israeli company Premia Spine is offering a unique and – it believes – better option. Its trademarked TOPS (Total Posterior Solution) System aims to revolutionize the spinal implant market in the same way that total hip and total knee replacement systems made hip and knee fusions a thing of the past.

“We believe patients suffering from spinal stenosis can also get joint replacement rather than fusion,” CEO Ron Sacher tells ISRAEL21c. “We’ve developed an implant that recreates all functions of the posterior spinal column, where there are important joints, ligaments and bony structures that provide control over twisting, bending and flexing.”

TOPS allows the surgeon to remove diseased parts of the spine and then stabilize it with an artificial joint that restores the function of a normal posterior spinal column.

The titanium-sandwiched implant not only gives patients normal, pain-free mobility, but it also protects adjacent levels of the spine from similar degeneration – a common unwanted side effect of fusion surgery.

Already having earned the European Union’s CE Mark, TOPS is available to patients in Austria, Germany, the UK, Turkey and Israel. This year, the company’s European marketing efforts will expand, says Sacher.

In addition, Premia Spine will assume sponsorship of a US Food & Drug Administration study that has been collecting data on patients who had the device implanted experimentally as many as five years ago. 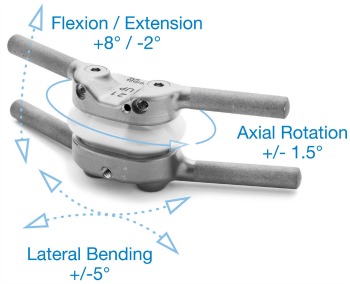 The TOPS implant allows for full range of normal back motion.

The TOPS System originated at the Israeli orthopedic device company Impliant, which Sacher joined as CEO in 2001. Two years later, the firm hired design engineer Uri Arnin, whose groundbreaking ApiFix device for correcting curvature of the spine is now in clinical trials.

“At that time, we decided to transition from classic orthopedics to spinal implants,” says Sacher, who holds two Ivy League business degrees.

After ascertaining that the most frequent spinal disease in people over 40 is spinal stenosis, he relates, “We saw a need for better clinical outcomes than fusion surgery, and thought that our experience and knowledge could be leveraged to make significant improvements.”

Impliant invested more than $50 million in perfecting the TOPS implant, its instrumentation, and the surgical technique.

Though Sacher left Impliant in 2007 to co-found another medical device company he later sold to Boston Scientific, in 2011 he acquired the TOPS System’s 16 worldwide patents, and restarted the company as Premia Spine. It’s still based in Ramat Poleg, near Netanya.

He explains that the TOPS System is intended for adult patients with disease affecting the three segments of the lower, or lumbar, region of the spine when non-surgical treatments have failed to provide relief. “The device comes in different sizes to cover the range of anatomies that exist,” Sacher adds.

For patients whose stage of disease is so severe that they cannot be helped by TOPS alone, Premia Spine also manufactures and sells a trademarked fixation system to be used in fusion surgery, which can be “topped off” with a TOPS implant.

“Usually spinal disease starts at the base of the lower back and works its way up, so you can have a more diseased state at one level and a less diseased state adjacently. TOPS can be placed above the fusion to serve as a transitional segment to protect the spine levels above it,” says Sacher.

UNCOVER ISRAEL - Get the ISRAEL21c
Weekly Edition free by email
Sign Up Now!
Bring Israel's story to life.
Millions of people around the world rely on us to gain a deeper understanding of Israel. We are the trusted source for original content you won't find anywhere else.
You can make a difference. Donate today to support journalism that brings Israel’s story alive.
SUPPORT ISRAEL21c
Read more on:   Health, Medical devices, back pain, spinal stenosis, Premia Spine