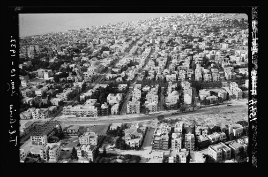 Tel Aviv is famous for its International Style architecture, so much so that in 2003, UNSECO named it to its World Heritage List. At that time, UNESCO called “The White City”, “an outstanding example in a large scale of the innovative town-planning ideas of the first part of the 20th century… [and] also an outstanding example of the implementation of these trends taking into account local cultural traditions and climatic conditions.”

As one who actually owns an apartment in one of these Modernist structures, I would like to tell UNESCO a thing or two about the innovative trends of the last century. One one hand, yes, the architecture is outstanding. On the other hand, the materials used to build them never stood a chance against the harsh Mediterranean conditions. But ongoing maintenance is almost impossible under the system of joint ownership in which buildings are run by a tenants committee. By “almost impossible” I mean, if half your neighbors are seriously crazy and the other half are engaged in bitter, long-standing feuds, you will never reach an agreement about fixing anything, and your building will come to look like crap.

This is the real and true reason for why most of the “White City” buildings aren’t very. So it is nice to delve into the US Library of Congress’ G. Eric and Edith Matson Photograph Collection and see Tel Aviv as it was supposed to be under the urban plan of Sir Patrick Geddes: modern, clean, functional and flowing.

Above, I believe is the turnabout towards HaYarkon and Gordon Streets. Below, Dizengoff Circle as it once was: pleasant, walkable and, above all, level.

Fortunately, there are a few brave souls out there who have taken on the challenge of raising awareness about the city’s — and the country’s — Modernist heritage. Among them is Tel Aviv’s Bauhaus Center, an organization dedicated to creating a platform for Bauhaus architecture and design in Israel. Here’s their building today, at 77 Dizengoff Street…

The Bauhaus Center also functions as a gallery. The most recent show is of works by painter Sali Ariel who depicts the city and its architecture in lively splashes of color — it may not be white but it’s definitely more in keeping with the real Tel Aviv spirit!