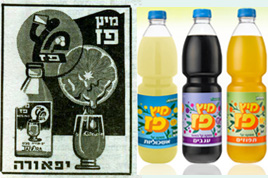 Sinc the 1930s, Israelis — my Sabra mother included — would quench their summertime thirsts with a sunshine-colored beverage known as Mitz Paz. The name literally means “Golden Juice” and indeed, Mitz Paz came in two hues from the spectrum: orange-y and yellow-white grapefruit-ish.

The likeness was purely visual, however, for when it came to flavor, Mitz Paz bore little resemblance to the orange and grapefruit juices we children knew back in the USA. It tasted strange to us, sickly sweet and artificial. What can I say? We couldn’t stand the stuff.

Maybe that’s because Mitz Paz is ubiquitously Israeli. Pitchers of Mitz Paz — the self-styled “national beverage” — are placed on the table at every bar mitzva, wedding, board meeting, or political summit. But Mitz Paz is not an acquired taste. You have to be born into it. 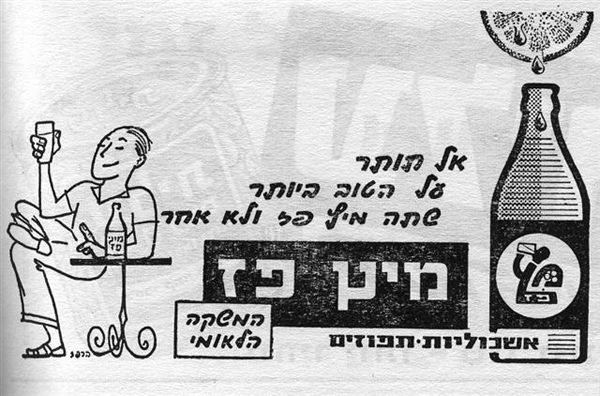 Mitz Paz is made by Jafora-Tabori, the country’s second-largest beverage manufacturer. According to the company website, “Mitz Paz is the only beverage still around from the days before the establishment of the State of Israel. If a beverage ever was a symbol, Mitz Paz faithfully lives up to this description… This popular beverage was in high demand in those days, and quenched the thirst of soldiers in their determined struggle to establish the state.”

“Tabori was founded in 1933 by Yaacov Tabori and his father, Issachar Taboriski, with the establishment of the family’s beverage production factory in Pardes Hanna. At the outset, the factory produced seltzer siphon bottles, and then, a delicious variety of juices and flavored carbonated beverages in glass bottles.”

At the beginning, the company apparently did produce actual citrus juice, working out of “Rehovot’s historic winery, when oranges from the nearby orchards were squeezed on 20 hand-squeezed juicers. The work was not easy and the conditions not optimal, but the company’s flagship product, Mitz Paz, was created.”

In 1936, the Cristal line of carbonated drink products was launched. “With the outbreak of World War II, the factory supplied products to the British army, and became the main supplier for the Shekem Military Canteen Organization after the foundation of the state.

By the early Sixties, a new generation of Israelis was hooked on Mitz Paz.

“Jaf-Ora kicked off the decade of the 1970s with the creation of a new production line for carbonated drinks. At the same time, Schweppes, the first brand of drinks arrived in the country from abroad and was widely accepted by Israeli consumers due to its unique flavors and international reputation.”

“Along with a variety of products, Tabori introduced numerous marketing developments and technological innovations… which improved product flavor and customer satisfaction.” Innovations in packaging include family-size bottles, plastic caps for glass bottles, soft drinks in 2 liter plastic bottles and disposable packaging for the Tropit soft drink.

In the carbonated drink sector, the Jafora-Tabori brands are RC Cola, RCQ along with old faithfuls Schweppes and Cristal. In 1997, Jafora-Tabori, together with Kibbutz Ein Gedi, founded Ein Gedi Mineral Water Ltd. and introduced the Ein Gedi brand of mineral water to the market.

Today, Mitz Paz is sold in a variety of flavors, including orange, diet orange, grapefruit, diet grapefruit and grape, packaged in bottles — on display at the Jafora-Tabori website — and cans — which may be viewed at the online Can Museum or on Ronen Rothfarb’s Can Collection website. 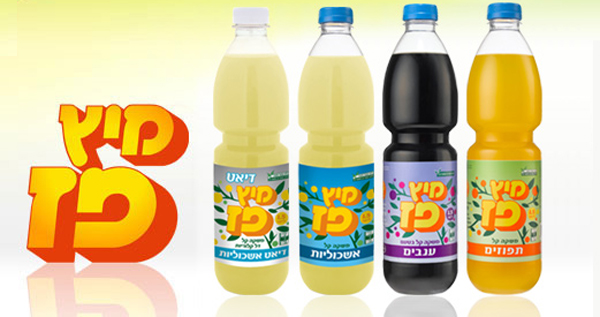