In Europe, blacksmiths pass their craft from father to son, according to Walied Khoury, a blacksmith in the village of Fassuta in the Western Galilee.

But there are only about eight blacksmiths in all of Israel. Khoury is one of them and he learned the trade almost by chance.

Khoury is a friendly man dressed in a T-shirt that says BLACKSMITH on it, with a tattoo of an anvil on his forearm, a shaved head and fashionable goatee. He looks more like a motorcyclist than a blacksmith.

His workshop is in his home, a large stone house that has been in his family for many years.

This house is not only his birthplace, but also the birthplace of his craft.

“I was born right here in 1967,” Khoury says, standing in what is now his gallery filled with his creative artwork: iron gates, candlesticks, roses, hooks, menorahs, bedframes, sculptures of biblical scenes.

In his smithy workshop are two anvils, one of which was the inspiration for the tattoo on his arm. 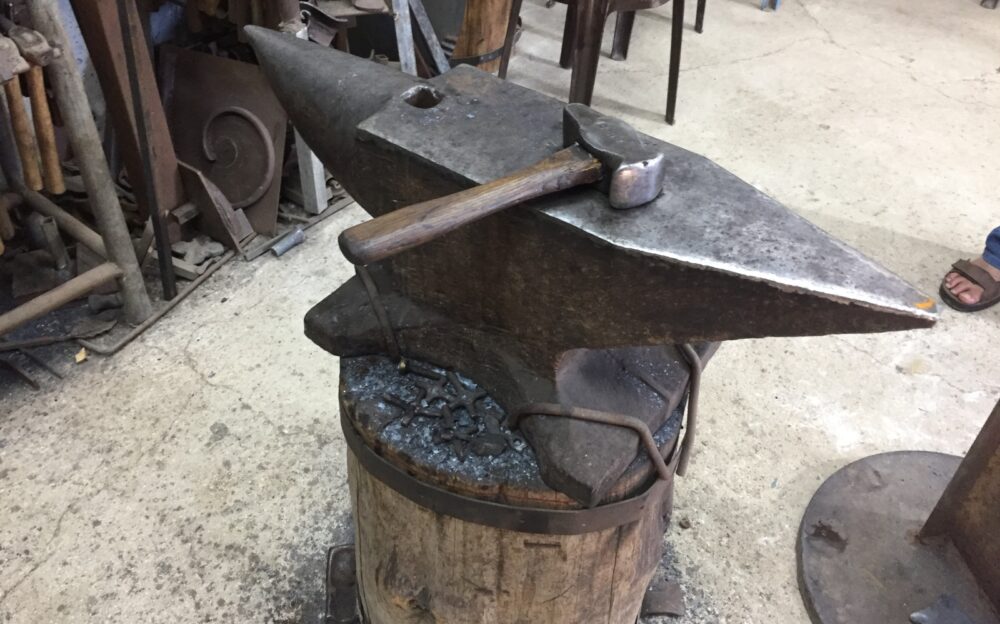 One of Walied Khoury’s anvils and hammers. Photo by Diana Bletter

“Anvils are more than 1,500 years old,” Khoury says, diving right into his favorite subject as we walked through the gallery to the terrace of his house where he began his story. We looked out on the view of the green hills that stretched into the distance.

“Over here is the Israeli moshav of Netua,” Khoury says. “And over there, on the next hill, is Lebanon.” 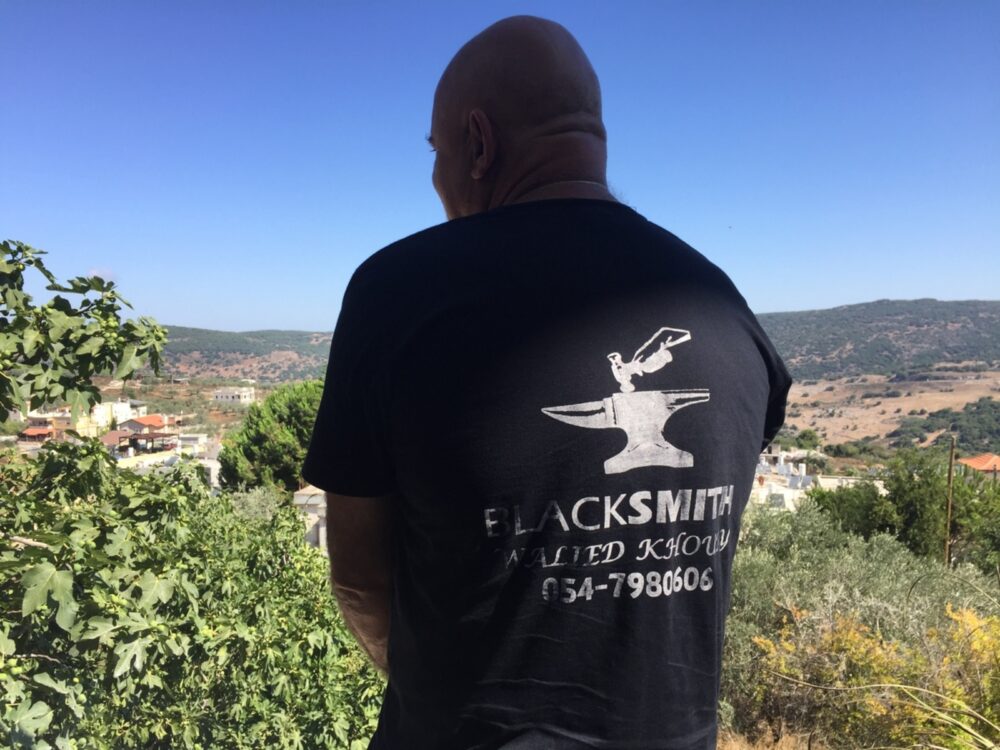 Walied Khoury on his terrace in his blacksmith T-shirt with a view of Lebanon in the distance. Photo by Diana Bletter

Fassuta has about 3,000 residents, all Catholics, and most of them named Khoury.

“The population hasn’t increased in all these years,” he says. “It’s far away from things. More people move out than move in.”

His parents owned a meat factory with 50 employees, Khoury said. “I was a man of sales; that’s all I did, driving around the country. I didn’t do anything physical.”

All that changed with the Second Lebanese War in 2006.

“Kaytushas were landing all around us,” he said. “Everyone in the village fled. Nobody was here. It was too dangerous. My wife was pregnant, though, and we couldn’t leave. The village was empty.”

In the midst of the war, Khoury wanted to make a bannister for the stairs in his house. His father, who used to watch the welder in his factory, told Khoury how to do it.

“I loved welding,” Khoury says. “I loved the idea that you can take a simple rod and make something interesting.” 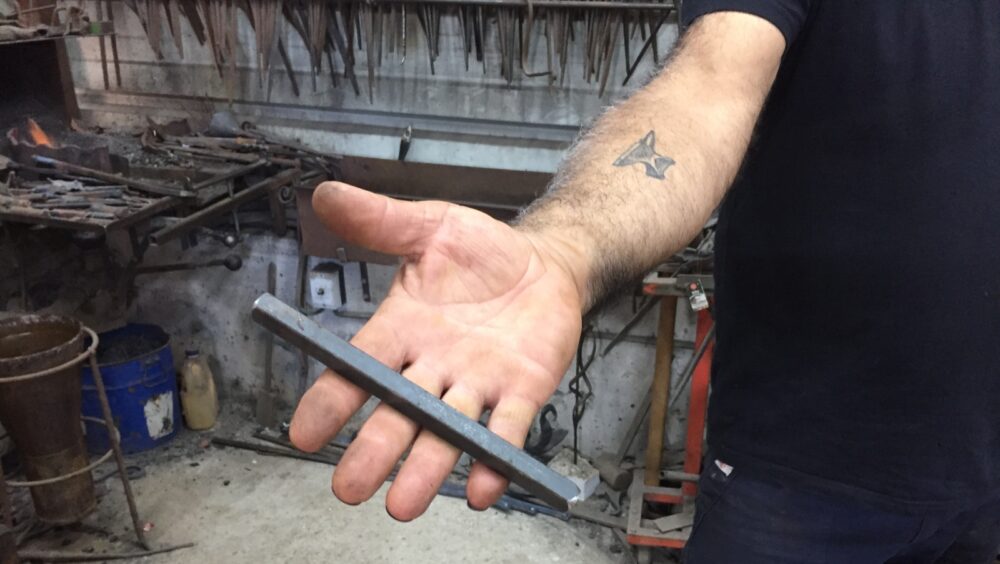 Walied Khoury shows the iron rod that he will soon fashion into art. Photo by Diana Bletter

He started welding as a hobby. Then his parents closed their factory and “on January 1, 2008, I opened up a welding workshop.”

Until 2012, Khoury made “simple things” from iron but added his own creative touch. 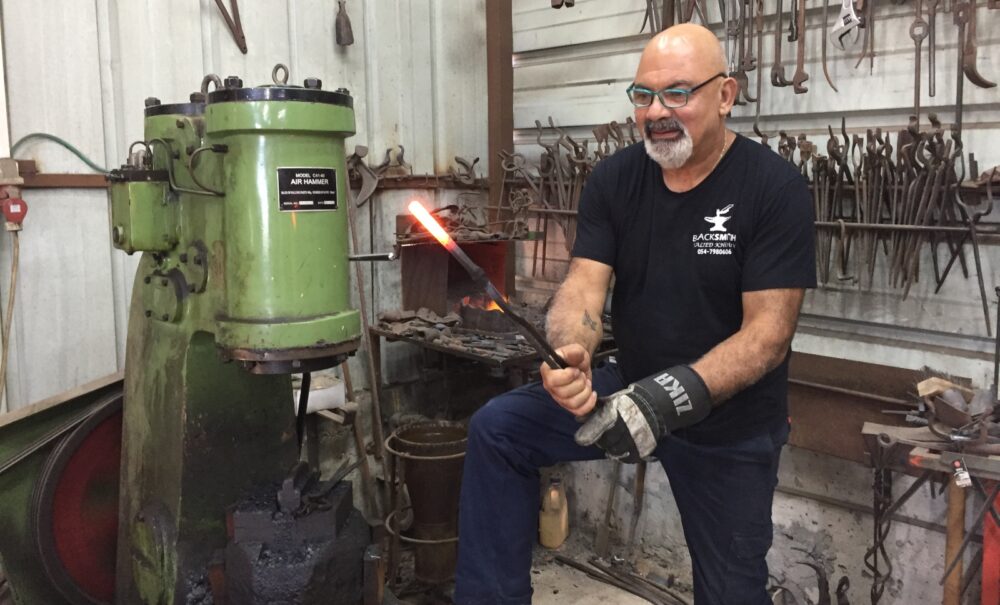 Walied Khoury at work in his smithy. Photo by Diana Bletter

Like other modern blacksmiths, Khoury uses tools and techniques that have been utilized for many centuries. A dagger found in Egypt, dating to 1350 BCE, shows evidence that an early blacksmith had heated and hammered it into shape.

Around the world, there is growing interest in this ancient craft, and Khoury found information about how to heat and shape metals using high temperatures in a very modern way, via YouTube. 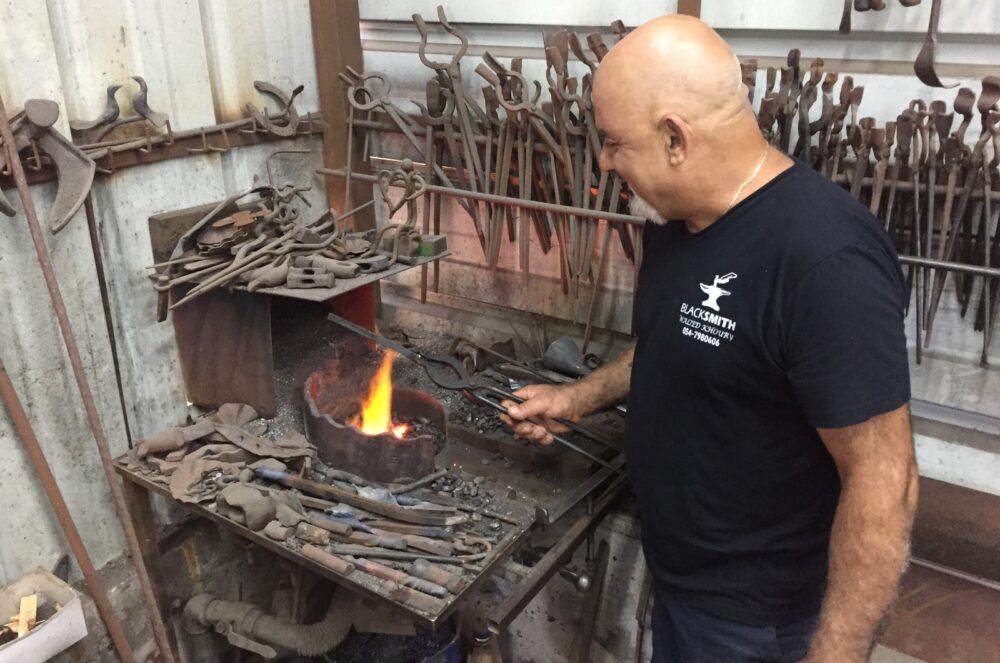 Walied Khoury at the furnace he built using instructions on YouTube. Photo by Diana Bletter

“Well, obviously, you can’t learn everything 100 percent on YouTube,” Khoury says. “You have to add your own imagination, but I learned a lot. During the evening, after work, I’d watch and I was fascinated. I even built a furnace for my iron work by watching YouTube.” 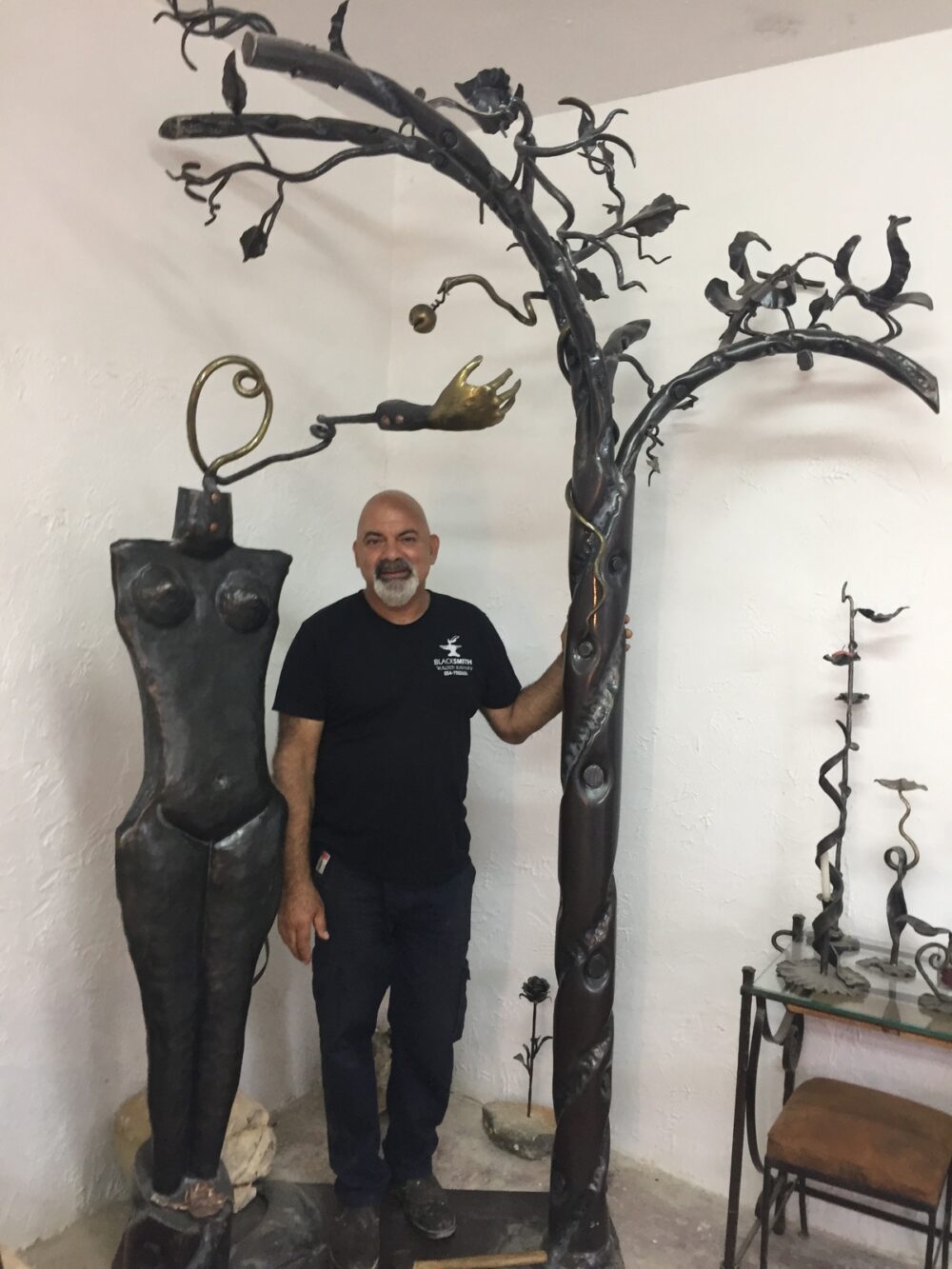 Walied Khoury with his sculpture of Eve and the tree in the Garden of Eden. Photo by Diana Bletter

Once Khoury had a furnace, he needed the charcoal to go into it. That was when he drove to meet Uri Hofi in Kibbutz Ein Shemer, 100 kilometers away, in central Israel.

Hofi, then 77, is considered a master blacksmith. One blacksmith wrote on his blog, “Some say Uri Hofi is to blacksmithing what a modern Beethoven would be to music.”

Hofi used to travel to teach in Europe and the United States. He offered to teach Khoury in exactly four days.

It wasn’t exactly father to son but the story seems sweeter because Hofi, a Jew, passed on his craft to Khoury, a Catholic. Khoury still visits Hofi, who’s now nearing 90.

The teaching stuck. Khoury’s first sculpture won first prize in a competition in England in 2014 and won first prize. He has since exhibited several times in Italy.

“Isn’t it strange that this is a high-tech world and you’re doing something that seems so ancient?” I asked him.

“I tell my children, money isn’t everything. You should do what you love.” Khoury today sells his iron craftwork around the country and abroad. He also leads workshops in his smithy for up to 12 people.

Then he took a five-inch iron rod, turned on his furnace, heated the rod and got to work, slowly stretching the iron and shaping a leaf as a gift for this visitor, who got to witness an ancient craft in a matter of minutes. 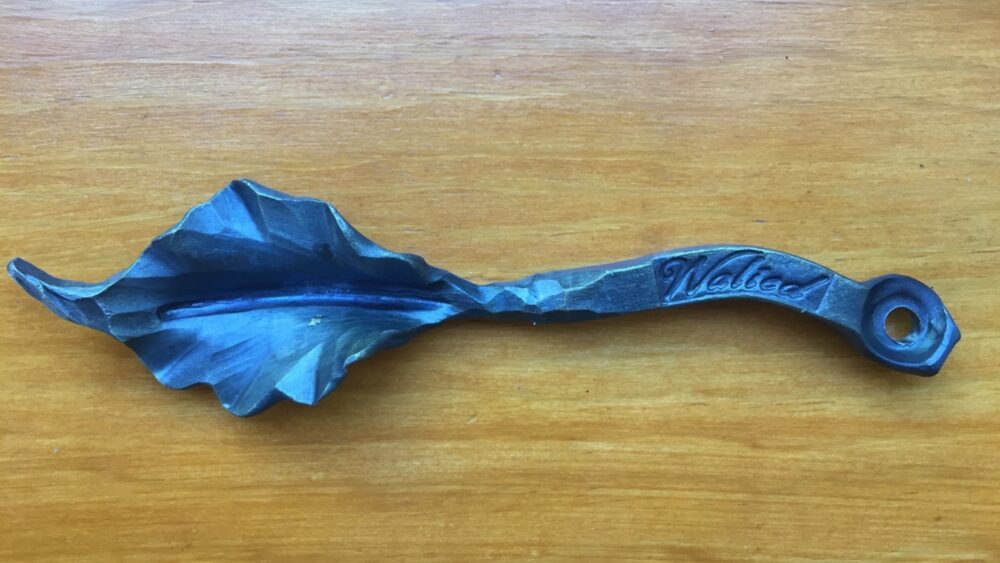