The televised cooking contest, MasterChef, is popular around the world and has been remade for 35 countries. But the third season of MasterChef Israel turned the international media glare on Tel Aviv – and on the contestants’ beef wellington, apple ravioli, Moroccan spicy fish, Quarkbaellchen, burghul maklouba, kadaif and awama drenched in lemon and sugar.

Hundreds of people auditioned for the show. Fourteen were chosen to fulfill tasks in the kitchen according to parameters set by the judges. The winner was awarded the title “MasterChef of Israel” and NIS 200,000 (more than $54,000).

Whereas the first two seasons drew a local audience, third-season contestants hailed from international backgrounds and drew a worldwide following. The winner, Tom Franz, grew up in Cologne, Germany, and immigrated to Israel eight years ago. Other contestants came from Venezuela and France, and another lived for a while in Italy and Belgium.

“The beauty of MasterChef is it’s a show that looks at a person through food. There are stories in the food,” says Gvirtzman.

The three finalists – Franz, who converted from Catholicism to Judaism, Salma Fiomy-Farij, a hijab-wearing Arab-Israeli, and Jacki Azulay, an ultra-Orthodox Jewish woman – couldn’t have written a better script for a reality show than their real-life stories.

Franz’s dishes told of being accepted into a new culture.

“My food tells a story,” he relates to ISRAEL21c. “I have my German food and that’s what I started with. As the show progressed, I added Mediterranean styles and Moroccan food to my repertoire.”

Runner-up Fiomy-Farij is a neuroscience researcher with a passion for Arabic and Italian foods. She showed that one can be true to tradition and also live a modern lifestyle.

And third-place Azulay, the second of 14 children, served up homemade goodness that she learned by cooking for her enormous family.

From the early stages of the contest, the composed, sincere, helpful, well-spoken Franz was considered a favorite.

His story of moving to Israel at 31, falling in love with the country, converting to Judaism, learning a new language, getting married, working in law but dreaming of being a chef, and the birth of his son was a made-for-TV narrative. That he is a whiz in the kitchen and could turn scraps into mouthwatering dishes only topped his appeal.

“He always showed his true traits and what a very special person he is just by being himself,” his wife, Dana Franz, tells ISRAEL21c. “He always helped the other contestants even if it was on his time and that could potentially harm him in the competition. That’s his character.”

Tracking him down for an interview was like a mission impossible. Offers for culinary collaborations and cooking shows – both local and international – have flooded the Franz household since he was crowned MasterChef of Israel. He has already established a private catering business on the side and is sifting through offers for the next step.

The other contestants included a dancer, a computer engineer, a retired teacher, a homemaker, a car sales person, a public relations officer, a tour guide and a disabled projects manager who all shared the dream of culinary stardom.

Fiomy-Farij, who comes from a traditional Arab Muslim family and holds degrees in public health and nursing, says she became the unofficial representative of the very varied Arab-Israeli community, allowing viewers to understand what Arab women can do.

“This show was open to everyone,” she says. “I showed the world a picture of the Arab in Israel.”

Gvirtzman says the contestants drawn to MasterChef are not always looking for personal fame but rather recognition for their food. 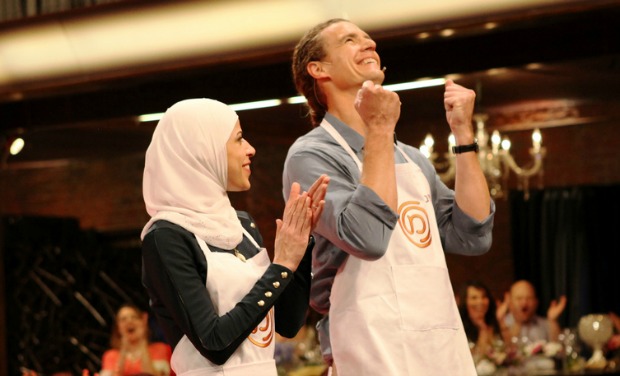 “It wasn’t about winning first, second or third place. Just to get to the final was the prize,” says Fiomy-Farji.

“MasterChef brings positive values to the small screen. It’s about friendly competition. It’s a show that charms people,” says Gvirtzman. “When you say ‘reality show,’ a lot of the time people think about laughing at someone or degrading people. MasterChef is not like this. The show is light, fun and friendly.”

Some critics questioned the authenticity of the Keshet production company’s casting call because the stories of heartache, loneliness, triumph and success were so tear-jerker perfect.

Yet Gvirtzman says casting was not manipulated. “The chefs chose them because they had the most interesting cooking,” she says.

Dana Franz pushed her husband to audition. “We live without a TV at home and I wasn’t sure I wanted to be on camera,” he says. “There was also my Hebrew [he only learned to speak Hebrew when he moved to Israel] and I wasn’t sure I was good enough in the kitchen. But my wife believed in me.”

Azulay and Fiomy-Farij did not need any encouragement.

“I love cooking. I watched the other seasons and asked why I wasn’t there. I looked at it as a cooking show and not a reality contest,” says Azulay, who was a viewer favorite for her bubbly personality and Moroccan cuisine. “In MasterChef, there’s a love and friendship between the contestants. It’s all about food and food comes from the heart.”

Fiomy-Farij, 28, now expecting her first child, adds: “The competition was friendly. We complimented one another and came out good friends. It wasn’t about winning first, second or third place. Just to get to the final was the prize. Tom deserves his win.”

The contest broke Israeli television records. The third season was the most-watched series during the winter of 2012-2013. The finale scored a record-breaking 52.3 percent rating – the highest score for a single TV episode in Israeli history.

The three finalists all tell of the warmth and encouragement they’ve fielded upon the season’s completion.

“Everyone congratulates me wherever I go,” says Fiomy-Farij. Her fellow researchers at Sheba Medical Center now expect her to bring yummy snacks. “People want to take photos with me or tell me they liked my cooking. It warms my heart.”

Franz says he can’t walk down the street in Tel Aviv without someone congratulating him.

“MasterChef is not an academic degree but it sparks the admiration of the people of Israel. After living here for many years and being the ‘other,’ without immediate family in Israel, and without any connection to the army or schools, today I’m connected to everyone,” says Franz. “It is an honor.”