Anyone who has visited Tel Aviv knows that this city-by-the-sea is packed with action and things to do. The popular travel guide, Lonely Planet, has now made it official, ranking Tel Aviv as one of the world’s most vibrant cities for nightlife and among the best hedonistic city breaks.

“If Jerusalem is Israel’s historic, classical capital, then Tel Aviv is its pleasure-seeking younger brother and the country’s coolest city by miles,” reports Lonely Planet. “Dubbed the ‘Miami of the Middle East’, you won’t see blinged-up superstars like Sean ‘P Diddy’ Combs, but everyone else looks the part on the wonderful beaches. Tel Aviv’s locals are a cultured lot, oozing style and hungry for the finest art, fashion, cuisine and clubbing.” 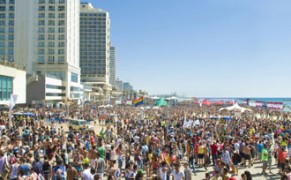 Lonely Planet gave Tel Aviv two honors by including it both on the list for Ultimate Party Cities and for the Top Ten Hedonistic City Breaks.

These are not the first honors the global travel series has awarded to Tel Aviv. In 2010, Lonely Planet named Tel Aviv third in a list of the world’s best cities, praising Israel’s leisure, entertainment and cultural center on the coast for its art and music scenes and relaxed, liberal culture.

Tel Aviv has garnered a whole bunch of tributes from around the world. ISRAEL21c offers up a partial list:

— The Huffington Post names Tel Aviv among the eight Best Beach Cities in the world.

— The Globe and Mail lists Tel Aviv as one of the world’s most creative cities.

— Conde Nast dubs Tel Aviv one of the world’s best cities for architecture.

— Travelers Digest says Tel Aviv is home to the most beautiful people in the world. 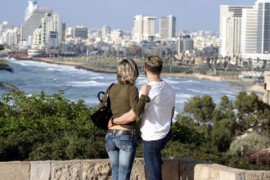 Miami of the Middle East. (Shutterstock)

“Like elsewhere in the greater Mediterranean, Israel’s capital of fun gets going late. The endless bars, pubs and cocktail venues start to fill up by midnight, from which point the nightclubs get revved up with dancing till dawn,” reports Lonely Planet.

“Nowadays an international crowd joins native Israelis for a mixed bag of funk, pop, house and techno (in addition to live shows small and large) at the city’s dozens of entertainment hotspots. Tel Aviv has a relaxed, hedonistic air, and prides itself on being gay-friendly and outgoing,” says the report.

All photos by Shutterstock.com.