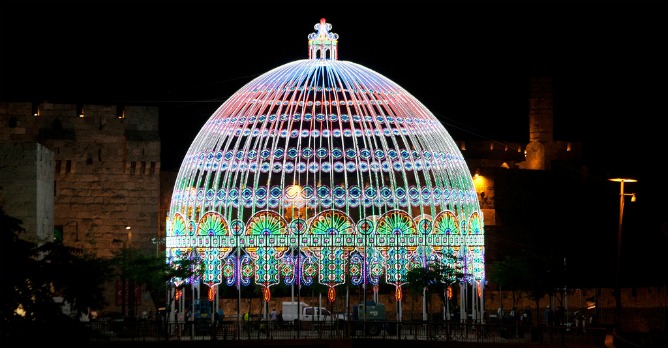 The Cupola. Photo by Mel Brickman

My friend Barbara and I were standing at Jaffa Gate facing the Cupola – an 82-foot-high domed structure by Italy’s Luminarie De Cagna – at the magic moment when night fell and its 63,000 electric candles came alive with tiny points of colored light.

It was opening night of the Jerusalem Festival of Light in the Old City, the fourth such event to bring international and local light artists’ sculptures, performances, projections and displays into the inimitable atmosphere of the ancient neighborhood.

Many people go for four nights to explore each of the four routes – orange, blue, green and yellow. Barbara and I opted for orange (my favorite color) and spent the next two hours on foot taking in some pretty awesome spectacles in the pleasant night air. 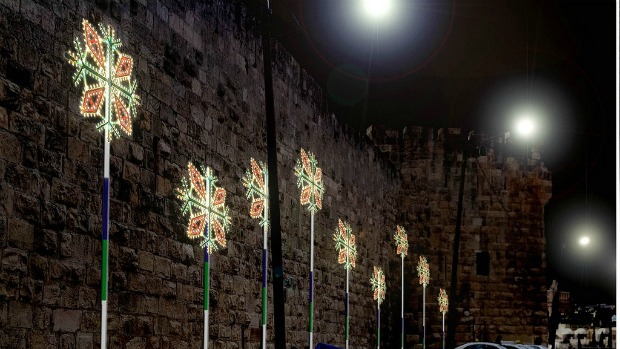 Our route was, cleverly, sponsored by the Orange wireless communications company, which presented a show called “Clear” in Batei Machase Square, an area of the Jewish Quarter built in the 19th century. The show featured colossal projections on the Rothschild House, which functioned as an Arab officers’ school between 1948 and 1967 and now houses an elementary yeshiva. The show was accompanied by a guy in heavy gloves playing a giant musical instrument called an Earth Harp. The strings were attached to a rooftop way over yonder above our heads.

At one point a reporter approached to ask our impressions of the free event. I told her that it brings a refreshing and fun perspective to a part of town that I might not otherwise care to explore at night. The normally dark cobblestoned alleyways were animated with polyglot tourists enjoying the colorful installations and pulsing music. Festival-goers were expected to number about 250,000 despite the fact that the Israel Opera Festival was going on at the same time.

My evening ended with an outdoor performance on light and electricity by Mayumana, a quirky high-energy Israeli modern dance troupe. Snaking my way back to Jaffa Gate to catch a bus home around 11:00, I discovered that this was when the crowd was truly starting to arrive. It was going to be a long and lively night in Jerusalem. 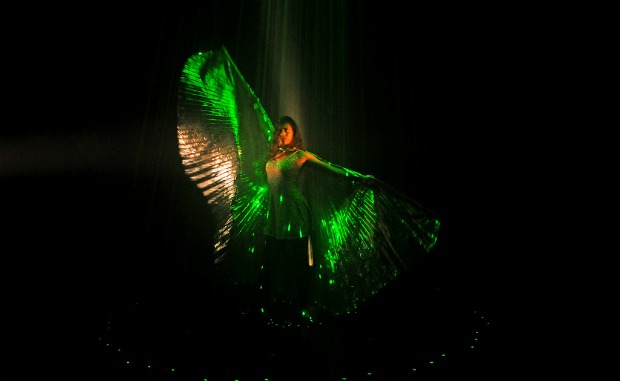 Some other things you can see through June 14:

UNCOVER ISRAEL - Get the ISRAEL21c
Weekly Edition free by email
Sign Up Now!
Bring Israel's story to life.
Millions of people around the world rely on us to gain a deeper understanding of Israel. We are the trusted source for original content you won't find anywhere else.
You can make a difference. Donate today to support journalism that brings Israel’s story alive.
SUPPORT ISRAEL21c
Read more on:   Blog, History and Culture, Jerusalem Festival of Light, Entertainment, Art in Israel