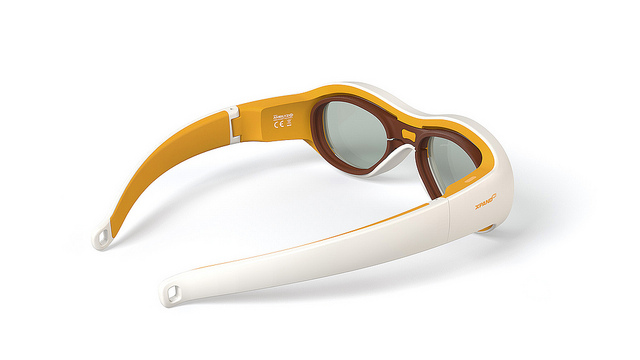 The award will undoubtedly raise worldwide interest in Amblyz Glasses, based on a patent owned by Dr. Omry Ben-Ezra, a family physician who was determined to find a more kid-friendly treatment for amblyopia – commonly known as “lazy eye,” a neural disorder affecting three to five percent of all children.

Lazy eye is usually treated by putting a patch over the stronger eye, or with eye drops that blur vision in the stronger eye, in order to “train” the weaker eye to function and develop its muscles and neural connections.

“The need for the product came from observing children walking around with eye patches, which seemed medieval,” Ben-Ezra tells ISRAEL21c. “My idea was to incorporate an electronic patch in the glasses to intermittently make either side transparent or opaque, so the child is training the eyes while living everyday life.”

The gadget makes better therapeutic sense as well. “In amblyopia, children develop monocular vision – seeing out of one eye — and when you patch, you are still only allowing one eye to work. With our glasses, the eyes are training to work together,” he explains.

The non-prescription Amblyz eyeglasses, first conceived in 2003 and introduced to the market a year ago by Cyprus-based XPAND 3D, are designed for children from three to 10 years old. They are powered by a battery that can be recharged overnight.

Israeli connection gets the job done

When Ben-Ezra tested a prototype of his invention on children at three Israeli medical centers several years ago, he found that compliance was much higher than with patches or drops. That makes parents happier, too.

The positive results of the study were published in the Journal of Investigative Ophthalmology and Visual Sciences, but the startup that was developing the product under the auspices of the Chief Scientist was plagued by financial and technical difficulties.

Ben-Ezra knows now that the technology needed for Amblyz didn’t really exist until 2010, and he found it through a uniquely Israeli connection.

“Lucky for us, in parallel XPAND 3D was working on eyeglasses for cinema. And they had the technical abilities we needed. Their electronic shutters were better than those we could achieve with our modest means — the electronics and batteries are smaller, and the entire mechanism could be enclosed in the frame.”

But how was he to get the attention of a multinational entertainment technology company with no Israeli presence?

Well, XPAND 3D Chief Strategy Officer Ami Dror happens to be Israeli. And he happened to be working at the time on developing medical applications for XPAND 3D, including glasses to treat lazy eye and motion sickness.

An introduction from a mutual friend got the two men together.

“We had the technology ready to go, and he had the IP and clinical tests, so it was a perfect match,” Dror tells ISRAEL21c. “From XPAND’s point of view, developing a product like this without the medical community was challenging. The Israelis gave us that knowhow.”

They’re off to a good start: A Turkish chain of optical stores has placed an order of 7,000 units.

“The health ministry is considering making Amblyz the official government-sanctioned treatment for Turkish children with amblyopia,” Ben-Ezra reports. “Now we are supporting XPAND in making Amblyz a worldwide success.”

UNCOVER ISRAEL - Get the ISRAEL21c
Weekly Edition free by email
Sign Up Now!
Bring Israel's story to life.
Millions of people around the world rely on us to gain a deeper understanding of Israel. We are the trusted source for original content you won't find anywhere else.
You can make a difference. Donate today to support journalism that brings Israel’s story alive.
SUPPORT ISRAEL21c
Read more on:   Health, Medical devices, Living, Israel, smart glass, Innovation