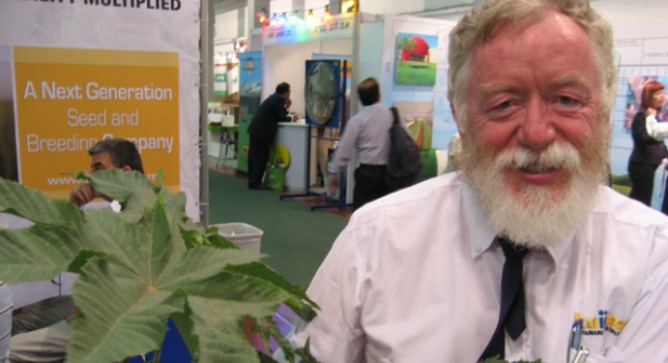 Since the Sixties “green revolution,” when Norman Borlaug introduced the concept of cross-breeding and hybridization of plants to boost output, not much has changed, according to Doron Gal, CEO of the Israeli seed technology company Kaiima Agro-Biotech.

Kaiima, which means “sustainability” in Hebrew, hopes to be that change. Gal says that depending on plot, location, crop and season, Kaiima methods have boosted crop yields in ways not seen since the green revolution –– by 10-50 percent.

Kaiima does this by doubling the chromosomes of plants. This is a process that happens naturally. But Kaiima triggers the process so it happens more readily, resulting in more cell activity, more photosynthesis, better plant adaptations to conditions in the field –– and more food on the table.

Other companies have attempted to induce “polyploidy” artificially but in the process damage the plant’s DNA. Kaiima has found a way around this delicate dance. “In agriculture, this is considered a game-changing technology,” Gal tells ISRAEL21c.

Funded by the famous Horizon Ventures

“Kaiima is the first since the green revolution that has an interesting yield-enhancement technology. This is creating a high level of excitement in this industry and dialogue with the biggest players,” says Gal.

The company recently received a nice “yield” of its own with a $65 million investment to continue developing its technology for edible wheat, corn, and rice markets, as well as advances in the biofuel market with its technologies for the castor plant.

Investors include the socially conscious Horizons Ventures, managing the private pay-it-forward investments of Li Ka-shing (Horizon previously invested in Facebook and the Israeli startup Waze); the International Financial Corporation, a member of the World Bank Group; and Infinity Group.

Focused on the three major crops that feed the world, Kaiima has made good progress on each one. “We have demonstrated increases of a few tens of percents,” says Gal.

Kaiima currently has a commercial product available for castor plants.

They are in a semi-commercial stage in wheat and corn. That means seed producers are now testing variants.

Using its seed-breeding technology, based on a series of chemical washes and other proprietary techniques, Kaiima aims to boost crop output of the seeds sent to them.

Gal says: “It is a complex set of protocols. The idea is that genome multiplication happens in plants anyway – it’s the most important mechanization in speciation – and how plants respond to stressful environments. All we have to do is trigger this response within the plant.”

Kaiima says this non-GMO technology is able not only to improve plant productivity but also reduce the amounts of land, water, fertilizer and pesticides needed to grow crops.

The company is still, however, very much focused on research and development, says Gal. Unlike high-tech, agriculture technologies are slow to develop, with a pace much like the pharma industry.

“We try to fit more than one season into a year with various technologies, but still it is a rather short period,” Gal says. “It’s labor intensive.”

In biofuel, which takes up some 20 percent of its business activities, the company is working on business partnerships in Kazakhstan, China, Brazil and Mexico.

Despite the buzz a few years ago, there is less news about biofuels, and this lack of noise isn’t unwarranted, says Gal.

“Biofuels are hard to do. The hardest part is moving from general plants to actual real-world farming, and many in the biofuel arena are not agriculture experts. Biofuel had too much buzz four or five years ago and people expected it to happen tomorrow, but these things take time.”

“By 2050, farmers will be tasked to produce 70 percent more food than they do today to sustain the growing world population,” says Gal. “This is a daunting challenge that modern agricultural technology must rise up to meet.

The recent investment will go toward improving existing and advancing new technologies. One new idea is perennial wheat that a farmer would not need to plant year after year after year. “It grows back so you won’t have to till,” says Gal.

Kaiima was founded in 2002 by Amit Avidov. It is based in Sharona, Israel, and employs 68 people and 250 farm hands. The other founders are Gal, Alon Lerner, Dror Maayany and Zohar Ben Ner.

UNCOVER ISRAEL - Get the ISRAEL21c
Weekly Edition free by email
Sign Up Now!
Bring Israel's story to life.
Millions of people around the world rely on us to gain a deeper understanding of Israel. We are the trusted source for original content you won't find anywhere else.
You can make a difference. Donate today to support journalism that brings Israel’s story alive.
SUPPORT ISRAEL21c
Read more on:   Environment, Kaiima, seed technology, Agritech