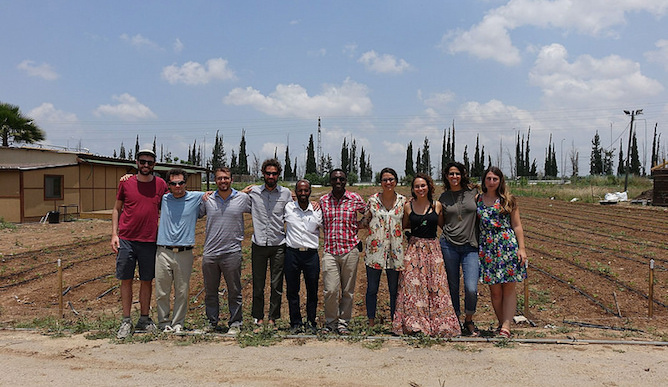 The Fellows meeting with Ethiopian Israelis, learning how they use community gardens as tools of economic empowerment.

“There are a lot of startup programs that are helping cultures within Israel, such as amazing community garden projects used as tools for the economic empowerment of different populations including marginalized youth and Ethiopian commuities. That has been a really powerful experience for us.”

The Leichtag Foundation was started in 1991 by Lee and Toni Leichtag with the goal of combating poverty and increasing self-sufficiency for residents of coastal North County, a region of San Diego County. Its programs are geared to support and inspire vibrant Jewish life; stimulate renewal, service and social activism in Jerusalem; and build relationships between residents of San Diego County and Israel.

“The reason we’re here is to show people in San Diego – which has a similar climate and agricultural landscape – what is happening in Israel and what we can bring back with us or share from San Diego,” Sherman tells ISRAEL21c.

With their guide from Keshet: The Center for Eduational Tourism in Israel, the group began in Tel Aviv by visiting the Heschel Sustainability Center, the HaHanut Shelanu Social Impact Cooperative and the Levinsky Rooftop Urban Garden. They took a walking tour of south Tel Aviv focusing on immigration and asylum-seekers in Israel, and dined at Meshek Barzilai Farm-to-Table restaurant.

On the way to Jerusalem, they spent Shabbat at Kibbutz Tzuba and did an activity at its Center for Creative Ecology. Later on, they participated in an ecology workshop at Kibbutz Lotan in the Negev and visited the Kaiima agricultural farm in Beit Zayit, a Jerusalem suburb.

Jewish Food Justice Fellow Arielle Golden was particularly taken with Kaiima, “a two-acre farm where they grow food for 150 families in a community-supported agriculture model. And they support at-risk youth by having them work on the farm and providing them with responsible adult mentors.”

She also was inspired by the group’s meeting with two Israel TED fellows — sustainable designer Adital Ela, developer of WindyLight wind-powered outdoor lighting; and Raffael Lomas, a sculptor and teacher of creative workshops for people with vision impairment.

“They are both visual atists with a strong connection with the earth,” says Golden. “I think incorporating the arts into other community development initiatives is a crucial component of commuity revitalization, so I hope to work closely with them even though they’re not farmers.” 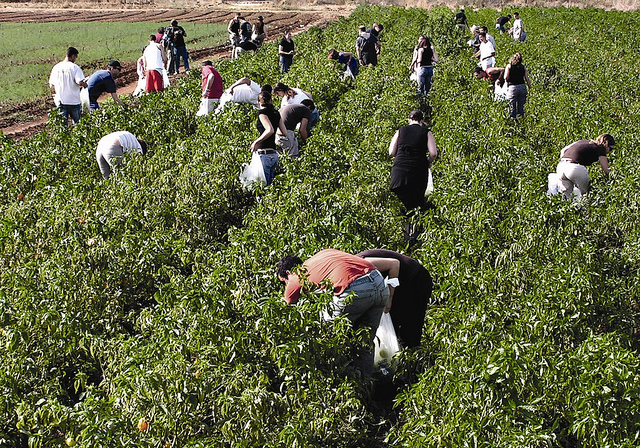 In Jerusalem, the fellows and three accompanying staff members enjoyed events in Jerusalem’s Season of Culture series, visited the Jerusalem Intercultural Center and walked through the Jerusalem Botanical Gardens. They talked with female haredi (ultra-Orthodox) employees at Elad Software Systems as well as haredi participants in the Mafteach Center for career advancement.

At “A Wall in its Midst” (Beliba Choma), a bridge-building project between the haredi and non-haredi population in Israel, Sherman reports, “We saw a group of Orthodox and secular volunteers tutoring haredi people who might not be educated in math, but are looking to get jobs to support their families. They also help haredi women find job opportunities that work with their schedule and lifestyle.”

Fellow Matt Karlin remarks: “We saw a wide breadth of organizations. We saw community organizations that are really working on a grassroots level to improve the quality of life for people on the street; we saw people who are approaching from more top-down ways, such as community farms and educational farming programs. We went to the [Neot Kedumim] Biblical Landscape Reserve, and that’s another way to engage people.”

“The Leichtag Foundation wants to make it a place where the Jewish and non-Jewish community can engage with farming, with sustainability, with what it means to be Jewish,” says Karlin.

“My takeaway from our experiences in Israel is the different ways you can use an agricutlural space to engage people, whether it’s bringing people from different backgrounds together or connecting people with nature and the land. I’m hoping to show people what’s going on in Israel and develop our own programs that take what I think is the best of these programs.”

Golden notes that she was “surprised by the advanced ecological building I saw, such as composting toilets and natural building initiatives.” Some of these were demonstrated in Modi’in at the eco-educational farm run by the Hava & Adam Multidisciplinary Center for Sustainable Living.

Some of the personalities with whom the Leichtag fellows met included Rabbi Yonatan Neril, founder of the Interfaith Center for Sustainable Development, Yedidya Sinclair, vice president of research at Energy Global Israel; Rabbi Shaul Judelman, founder and coordinator of the Eco-Activist Beit Midrash offering holistic in-depth Torah study around issues of ecology; Rabbi Micha Odenheimer, founder of the Tevel b’Tzedek platform for service learning with impoverished and marginalized communities in the developing world; and Rabbi Moshe Solomon, director of the Gar’in Hineni social project for Ethiopian residents of southern Kiryat Gat.

The itinerary included Eilat and Mitzpeh Ramon; Ashkelon and Gedera (home of the Friends of Nature organization); an Israeli wastewater treatment facility; Bat Shlomo Vineyards near Zichron Yaacov, where students from an alternative high school get paid to till the wine-producing grapes; and Moshav Aviezer’s Israel School for Herbal Medicine. The fellows harvested their own medicinal herbs during a hike in the Elah Valley in central Israel.