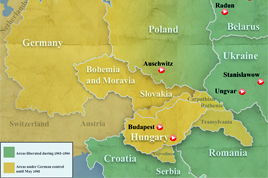 It is the eve of Yom HaShoah, Holocaust Martyrs’ and Heroes’ Remembrance Day in Israel, and one can feel the country slowing down. Tomorrow, people will come to a stop for a moment of silence while tonight, the central ceremony  will be held at Yad Vashem in the presence of the President of the State of Israel, the Prime Minister, dignitaries, survivors, children of survivors and their families, and the general public.

The central theme of Holocaust Remembrance Day 2014, writes Yad Vashem’s Chief Historian Prof. Dina Porat, is Jews On the Edge 1944. — referring to the point. exactly 70 years ago, when European Jewry was held in the balance between annihilation and liberation.

“On the one hand, cities from east to west, such as Vilna and Minsk, Warsaw and Riga, Belgrade and Sofia, Paris and Rome, were being liberated from the yoke of Nazi Germany; the Red Army was advancing, and the western Allies continued to bombard Germany, their landing in Normandy tipping the scales still further.

“On the other hand, in the same year, the Jews of Hungary were sent to Auschwitz, the Lodz and Kovno ghettos were liquidated, the last of their former inmates were deported and murdered, and death marches were initiated from the liberated territories to the heart of what remained of the Third Reich.”

“It was a year in which everything depended on the scales of time, and the Jews remaining in Europe were asking themselves: will the Red Army from the east and the Allies from the west arrive before the Germans come to murder whoever is still alive?”

Survival in the Ghetto in Budapest

The events of that year are more fully described in Porat’s essay on the theme. Yad Vashem this year will put a special focus on the fate of Hungarian Jewry, “a tragic example of the swift and ruthless efficiency of the Germans and their local sympathisers during the latter period of the war.”

Hungarian Jewry Before and During the Holocaust

“These events are at the heart of the tension between annihilation and liberation, a tension that was literally a question of life and death for the Jews at that time, who were living on the very edge.”

The Zionist Underground in Hungary