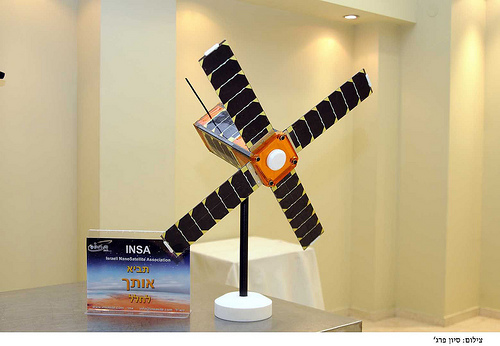 Israel is one of only eight nations in the world to launch an indigenous satellite into space. (Sivan Farag)

The prestigious International Space Conference will be held in Jerusalem in 2015, thanks to a winning bid by the Israel Space Agency. The conference is the world’s largest gathering on space and will bring more than 3,000 researchers and scientists to Israel’s capital city.

The International Astronautical Federation (IAF) announced Jerusalem as the venue during its congress meeting in Italy over the weekend. Other hosting bids came from Turkey, Thailand and Mexico.

The largest body in the world in the field of space, the IAF comprises 250 member organizations and aims at advancing space know-how and the development of products by encouraging international cooperation. It hosts an annual event every October in a different country.

In choosing Israel, the federation mentioned the academic space research performed in Israel and the vast government support in hosting the convention.

Israel is one of only eight nations in the world to launch an indigenous satellite into space and the government keeps a chunk of the budget for its space activities in research and development.

“I’m delighted to have our great efforts of bringing the convention to Jerusalem proved successful,” said Prof. Daniel Herskovits, Minister of Science and Technology.

Space scientists, ISA officials and industrial leaders will attend the event and learn about the latest innovations and discuss space policies.

“Israel being elected to host the conference comes to show its increased international reorganization as a space power, and would have a tremendous effect on the Israeli space industry,” said Prof. Itzhak Ben Israel, head of the Israeli Space Agency.

UNCOVER ISRAEL - Get the ISRAEL21c
Weekly Edition free by email
Sign Up Now!
Bring Israel's story to life.
Millions of people around the world rely on us to gain a deeper understanding of Israel. We are the trusted source for original content you won't find anywhere else.
You can make a difference. Donate today to support journalism that brings Israel’s story alive.
SUPPORT ISRAEL21c
Read more on:   News, Jerusalem, Space, International Space Conference, International Astronautical Federation, IAF