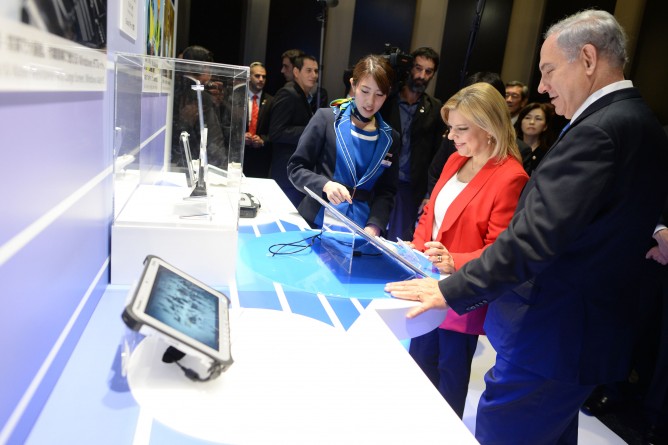 Prime Minister Benjamin Netanyahu and his wife, Sara, visit the Panasonic Development Center in Tokyo, during Netanyahu’s official visit to Japan in May 2014. (Kobi Gideon/GPO/Flash 90)
Japanese Minister of Economy, Trade and Industry Toshimitsu Motegi was in Israel this week to sign a first-of-its-kind industrial R&D collaboration agreement with Israel’s Minister of Economy Naftali Bennett. Israel is the first country with which Japan has such an R&D agreement.

Minister Motegi and Israel’s Minister of Economy Naftali Bennett signed a collaboration agreement for reciprocal support in joint industrial R&D projects between Israeli and Japanese companies and organizations. The agreement will be implemented by the Office of the Chief Scientist (OCS) in the Israeli Ministry of Economy.

“We are constantly looking for ways to strengthen our economic ties throughout the world, as exemplified by this R&D agreement,” Bennett said. “This is a breakthrough achievement. The agreement creates an excellent platform for joint initiatives, innovation and for Israeli companies to enter the Japanese market.”

“At a time when the largest Japanese companies are searching for new engines of growth via business and technological innovation, this is an excellent window of opportunity for Israeli companies in general, and specifically for those with groundbreaking technology,” said Israel’s Chief Scientist in the Ministry of Economy Avi Hasson, who oversees Israel’s international activity in industrial R&D.

According to Israel’s Foreign Trade Administration in the Ministry of Economy, Israeli exports to Japan in 2013 reached $762.3 million.

“Over the past year, the Japanese business sector’s interest in Israel and in cooperation with Israeli businesses has grown, in particular in the homeland security sector, including cyber security,” said Eitan Kuperstoch, Israel’s commercial attaché to Tokyo. “In the past year alone, more than 6,000 Japanese businesspeople participated in events organized by the commercial attachés of the Israeli Ministry of Economy.”