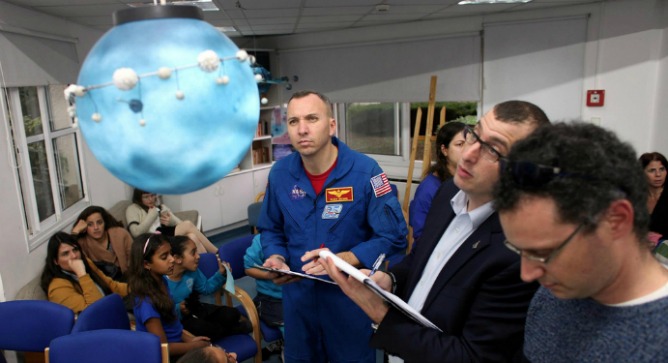 Fourteen heads of space agencies from around the world gathered in Israel recently to reflect on the future of space exploration and consider Israel’s next astronaut.

The eighth annual International Ilan Ramon Space Conference in Herzliya — organized by the Fisher Institute, Israel Space Agency and Israel Ministry of Science and Technology — attracted a who’s who of the space community.

Such a large foreign delegation coming to a conference in Israel was no fluke.

“Israel belongs to an exclusive club of about 10 countries in the world that have all capabilities in space — producing satellites, launching them and communicating with them,” Israeli Minister of Science and Technology Daniel Hershkowitz tells ISRAEL21c. “We are small, but Israel is a power in space research.”

The meeting is a living tribute to Israel’s first astronaut, the late Colonel Ilan Ramon, who perished with his colleagues on the space shuttle Columbia on February 1, 2003.

“This conference commemorates the amazing life of Ilan Ramon by fostering cooperation among nations,” Bolden told the attendees. “The word ‘shalom’ is not simply peace, but wholeness and completeness. Ilan and the whole crew brought us wholeness even though they are no longer here. It’s up to all of us to build on their legacy.”

Experts talked about the successes since Ramon’s death, especially the International Space Station (ISS), a research laboratory that has been visited by astronauts from 15 countries.

“The ISS is our toehold to the rest of the solar system,” Bolden said. “It is a tangible symbol of unprecedented international cooperation.”

Perhaps the most exciting news to come out of this year’s conference was the official statement that Israel is ready to train a new astronaut.

Israel Space Agency Chairman Isaac Ben Israel announced that his bureau is in talks with international space agencies to place an Israeli astronaut on the International Space Station in the coming years. The Science and Technology Ministry released a statement backing this up.

Israel was invited to join the UN Committee on Peaceful Uses of Outer Space (COPUOS), the central international body that deals with space matters, and signed an agreement for cooperation with the European Commission in the field of space.

And Bolden announced that NASA would like to renew its cooperative agreements with Israel to include several new projects for the coming years.

“Israel is one of the anchors of cooperation with NASA, along with several other countries. We will consider expansion of cooperation on other applications in space exploration and development of integrated technologies,” he said. 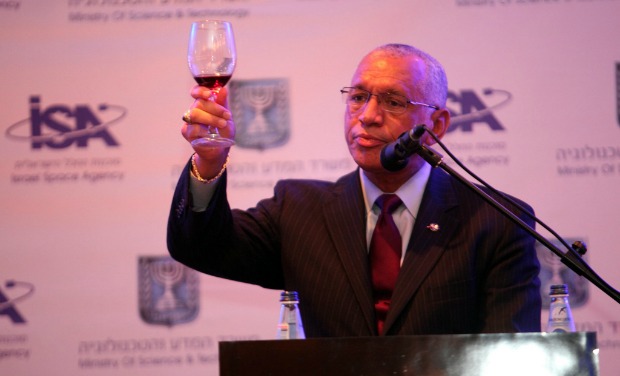 NASA’s Charles Bolden announced that NASA will renew its cooperative agreements with Israel for some new projects.

Israeli activity in the study of space began in the 1960s with academic research. In 1983, the Israel Space Agency was established, and five years later, Israel launched its first satellite – Ofeq-1 — a reconnaissance satellite developed and built in Israel. Today, Israel has launched 13 locally made satellites into space.

The conference in Herzliya was an appetizer to the 2015 International Space Conference (ISC) set to be held in Jerusalem. The ISC is the world’s largest gathering on space and will bring more than 3,000 space experts to Israel’s capital city.

“Israel being elected to host the conference comes to show its increased international reorganization as a space power, and would have a tremendous effect on the Israeli space industry,” said Israeli Space Agency head Ben Israel.

“We have cooperation in space with many countries,” adds Hershkowitz. “Of course, it leads to cooperation on earth as well. The Jerusalem conference will bring even more.”

While in Israel, Bolden attended the opening of the Moona science, environment and space center in Sakhnin, which is being hailed as a new opportunity to further Arab-Jewish coexistence.

“A space shuttle successfully connects between 14 astronauts from around the world, no matter what culture, religion, race, gender or nationality they are,” Bolden told the students.

“There is no better investment in space or science than investing in the younger generation,” Hershkowitz tells ISRAEL21c.

Space IL, a non-profit organization established by a multidisciplinary team of Israeli space enthusiasts to compete for the $30 million Google Lunar X Prize, also took part in the conference. Google’s challenge calls for a team to successfully launch, fly and land a robotic spacecraft on the Moon. Yariv Bash, a co-founder of the Israeli team, says it was important that NASA leaders took time to talk to the schoolchildren.

“They are the future of Israel,” he says. “Space IL is aimed at the young generation. We are trying to ignite the imagination of the country’s young generation and push ingenuity past its limits. We want to stimulate the young to take an interest in space exploration.”

UNCOVER ISRAEL - Get the ISRAEL21c
Weekly Edition free by email
Sign Up Now!
Bring Israel's story to life.
Millions of people around the world rely on us to gain a deeper understanding of Israel. We are the trusted source for original content you won't find anywhere else.
You can make a difference. Donate today to support journalism that brings Israel’s story alive.
SUPPORT ISRAEL21c
Read more on:   Innovation, Technology, Ilan Ramon, Ilan Ramon International Space Conference, SpaceIL