They are some of the biggest movers and shakers in the Middle East – their wealth and influence extend across the world, to the United States. They’ve built empires from a patch of desert and now sail their luxury cruise ships at will; produce some of Hollywood’s most memorable films; own some of New York’s most important real estate; and build enterprising businesses in shipping, diamonds, high-tech and trade. One even works to promote global democracy.

Meet 10 Israeli billionaires who have made the Forbes Rich List for 2010, along with 793 other billionaires around the world. They join the world’s second-richest man, Bill Gates (Mexican telecommunications mogul Carlos Slim just pushed Gates to second place, beating him by a measly half a billion dollars), who lost $18 million last year, and Warren Buffet, who lost a hefty $25 billion. The world’s richest are no doubt somewhat poorer, like most of us who have lived through the recent financial crisis, but these 10 Israelis along with the others on the list should still have some millions to spare.

ISRAEL21c brings you Israel’s top billionaires and the sources of their fortunes. 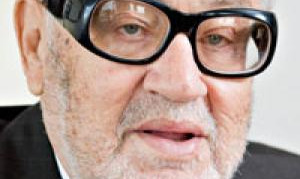 He lives in Monte Carlo where all the fabulously rich and famous want to be. Sammy Ofer is an Israeli shipping magnate who is close to the top 100 of the world’s richest people. With a net worth of $4 billion, Ofer – a married father of two sons (Ofer and Idan) – is consistently press shy as he protects his family assets in shipping, banking and real estate.

Knighted by Queen Elizabeth last year, the self-made billionaire owns several Chagall paintings and donates millions to charity, including the National Maritime Museum of Greenwich to which he bequeathed $40 million not long ago, including $3.3 million to help rebuild the world-famous Cutty Sark ship, which burned down in a fire.

Ofer, who was born in Romania in 1922, but emigrated with his family to Mandate Palestine two years later, started his career as a delivery boy for a shipping company. At the start of World War II, he enlisted in the Royal Navy, and during the War of Independence served in the Israeli Sea Corps. He bought his first ship in 1950.

Arnon Milchen is another self-made billionaire. Born in Tel Aviv in 1944, the London School of Economics graduate also studied at the University of Geneva and went from being a business student and professional soccer player to transforming his father’s fertilizer business into a goldmine.

The married father of four has dealings in agriculture, aerospace, plastics, fiber optics and pharmaceuticals and over the years, through his company New Regency, has been a producer for a number of Hollywood films including War of the Roses, Pretty Woman, Fight Club and Mr and Mrs Smith. Look forward to Knight and Day with Tom Cruise and Cameron Diaz, another Milchen-produced film set to debut this summer.

Milchen is a staunch supporter of Israel and underwrites the Israeli Network, which transmits Israeli TV programming to the US and Canada. Last year he started an anti-terror company to protect friends and colleagues from global terror.

If there was a list of billionaires who have made a real difference in the world, Israel’s Stef Wertheimer would be in the top 10.

The self-made industrialist billionaire was born in Germany and fled to Israel to escape the Holocaust in 1937. He dropped out of school at the age of 16 and began working in a camera repair shop.

He joined the British Royal Air force as a technician in 1943. Some years later he applied to work for defense company Rafael but was dismissed because of his lack of education.

His strong penchant for tools paid off, however, in 1952 when he started Iscar, a small tool-cutting factory, in the backyard of his home in Nahariya. In 2006, he sold an 80 percent share in Iscar to Warren Buffet for a cool $4 billion.

Wertheimer has built a number of industrial parks in Israel and around the world, including Tefen, which focuses on providing opportunities and jobs to minorities such as Arab Israelis.

The married father of four lives in the Galilee region of Israel and also seeds high-tech companies such as Blades Technology, which produces jet engine blades.

She is certainly the only female billionaire in Israel. Ted made his fortune in America with his company Carnival Cruises that he founded in 1972. Since his passing in 1999 his daughter has shown that she’s no Jewish-American-Israeli princess.

Last year she founded Miya to develop new water-saving technologies for urban centers and improve the dire situation caused by widespread water loss. Despite a reputation for eccentricity, her businesses don’t seem to have suffered. A divorced mother of four, she lives in Tel Aviv.

With assets in mining and metals Alexander Mashkevich maintains his Israeli citizenship but is reported to live in various residences around the world including Russia.

The married father of two is yet another self-made Israeli businessman, who has built a mining and metals empire in Kazakhstan along with two long-time friends, billionaires Alijan Ibragimov and Patokh Chodiev.

Born in Kyrgyzstan, Mashkevich started out as a literature student at university, becoming a very young dean at age 26. He left academia, however, to pursue business. Active in Jewish causes around the world, he obtained Israeli citizenship early in his life and it’s his Israeli passport that he chooses for travel.

Today he helps run Alferon Management – a company that has acquired mining operations in various countries including Zambia, the Democratic Republic of Congo and Indonesia. He is married with two children.

Yitzhak Tshuva. may not be the richest Israeli, but he has made his name in America through his dealings in real estate with the ElAd Group.

Owner of some of America’s most valuable real estate ventures like The Plaza, the self-made billionaire also controls property in Vegas along with partner Nochi Dankner.

Tshuva’s Delek Group, which is publicly traded on the Tel Aviv Stock Exchange, operates more than 200 gas stations in Israel. The company also has interests in car dealerships, cable TV, car insurance and natural gas wells off the coast of Israel.

The Delek Group, listed under Green Venture Capital on the Tel Aviv Stock Exchange, also has interests in multimedia, electronics and some 130 high-tech companies. Tshuva lives in Netanya, Israel, and is the married father of five children.

Mining and real estate appear to be on the money mark for Israeli billionaires. Benny Steinmetz acquired his fortune through real estate and mining, notably in diamonds through his company BSG Investments.

The 50-year-old married father of four inherited his fortune and helped it grow as chairman of the Geneva-headquartered Steinmetz Diamond Group, which is De Beers’ largest customer. Supplying diamonds in the rough, Steinmetz has diamond mining licenses in Botswana, the Congo, Sierra Leone and Zambia.

The magnate also has stakes in Nikanor, a holding company that owns copper and cobalt mines in the Congo. He maintains homes in Israel, Africa and Belgium and among his companies are BSGR, involved in natural resources, oil and gas and Five Mounts Properties, a European real estate firm.

This self-made billionaire now living in London owns Africa-Israel Investments, which runs the company that is the world’s largest supplier and cutter of diamonds.

Leviev immigrated to Israel at the age of 15, and shortly afterwards began work as an apprentice in a diamond polishing plant. After serving in the Israel Defense Forces, he established his own diamond polishing plant and reportedly made his way by under-cutting the De Beers diamond suppliers and making his own deals in countries like Russia and Angola.

He has also invested in major real estate projects in Modi’in Illit, a suburban neighborhood outside Tel Aviv. He is also an investor in shopping malls, energy, fashion, telecom and the media. A golf-lover and philanthropist for Jewish causes, Leviev owns a second home in a Florida beach resort.

Earning second-to-last place on the list of Israeli billionaires is nothing to sniff at. With business in hotels and the defense industry, Michael Federmann is yet another self-made Israeli billionaire appearing on this year’s Forbes list.

Federmann’s $1.4 billion fortune is based on Federmann Enterprises, started by his father and his late uncle. He currently chairs two major companies, the defense technologies company Elbit Systems and Dan Hotels Corporation.

The Dan hotel chain, which started out as a boarding house in Tel Aviv, is now a nation-wide chain of hotels that’s expanding to India. Federmann is married and the father of four children. He lives in Tel Aviv.

Since making his fortune and cashing in his one billion dollars worth of shares, Kahn has been focusing on venture capital financing and philanthropy. A principle investor in Aurim Ventures, Kahn has invested in dozens of companies, including the clean tech water company Atlantium.

Spending most of his time on his 100-foot yacht off the coast of Israel, Kahn has imbued his children with positive values. His son, Benjamin is a marine biologist who was listed as a TIME Magazine hero for his environmental work, on projects that are no doubt supported by the family businesses.

The Kahns also own a string of underwater aquaria and exhibits in Israel, the Bahamas, Hawaii, Spain, the Virgin Islands and Australia through Coral World International, a company co-founded by Kahn senior.