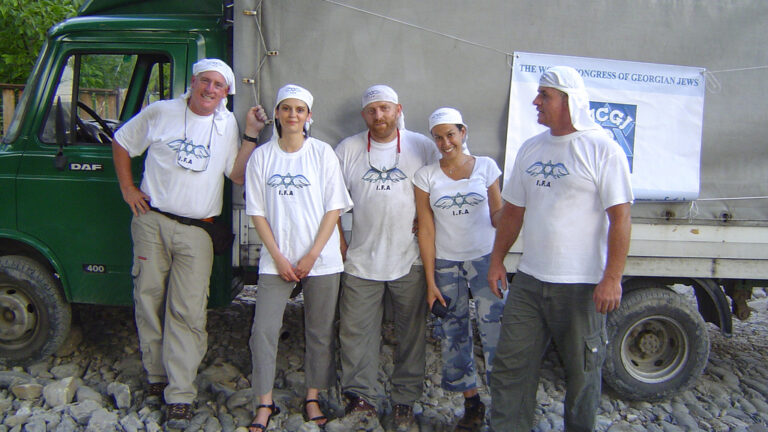 Israelis have been watching the unfolding tragedy of Hurricane Katrina and its aftermath with deep concern, and from the highest levels of government to the individual grass-roots efforts, they have been offering assistance and support to the parts of the US that were hit hard by the natural disaster.

“I want to point out that the US has stood by us during difficult times and it is our duty to assist it in the areas in which we can help,” said Prime Minister Ariel Sharon at the beginning of the government’s weekly cabinet meeting on Sunday. “I want to reiterate my condolences and my sharing in the grief there. We will do everything in our power to render assistance in the difficult situation in which so many US citizens find themselves.”

“Last week I sent a letter to US President George Bush in which I expressed my condolences and those of the Israeli people over the disaster. I want to thank Defense Minister Shaul Mofaz and Health Minister Danny Naveh whom we turned to in order to verify what aid for the US victims could be readied within a short time. Within a few hours I received answers and thus I was able to pass on the estimates regarding the assistance that Israel could render. A Defense Ministry and Health Ministry aid delegation will leave this week in order to coordinate what may be done there,” he announced.

Sharon’s letter to Bush included an offer of comprehensive medical assistance, expressing a willingness to send hundreds of doctors, nurses, experts in trauma and natural disasters, field hospitals and medical kits and other equipment, as well as temporary housing.

On Tuesday, the first shipment of supplies were set to leave Israel after the Bush administration officially accepted Israel’s offers of assistance. The 80 tons of supplies included ready-to-eat meals and other food, tents, generators, baby formula, diapers and bedding. Defense Minister Shaul Mofaz ordered the IDF to assemple a team of expert personnel, including search and rescue teams, medical staff, psychologists and experts in identifying bodies to assist, once approval was received from the U.S. for such help.

When the hurricane first hit, Israeli Ambassador Daniel Ayalon called the State Department to offer condolences and assistance, reaching out to officials at the Department of Homeland Security and Federal Emergency Management Agency – he was one of the first foreign representatives to offer help.

“America has always been there for Israel, and Israel is there for America.” Ayalon said.

The issue crossed party lines, with Vice Prime Minister Shimon Peres declaring that “our hearts are with the citizens of Louisiana, Alabama, and Mississippi, as well as all those affected by Hurricane Katrina. In light of the great natural catastrophe that has struck these areas, today we are all Louisianans, Alabamans, Mississippians; today we are all Americans.”

He added that “We must all unite and help the families that have been impacted and hurt so tragically: families, women and children who have lost those that are dear to them, as well as those who have lost all they once had.”

Not only government agencies, but Israeli non-profit organizations have also mobilized to help. IsraAID, the coordinating body of Israeli organizations active in development and relief work, sent a delegation of more than 25 medical personnel and psychologists, as well as experienced search and rescue workers to Lousiana. Israeli airlines have donated their tickets to travel to help with the efforts.

An Israeli organization has also offered to help in one of the grimmest and most difficult tasks -removing the dead bodies currently strewn in the city streets. A group of Israeli Zaka volunteers in the United States is preparing to travel to New Orleans in order to aid in body identification and removal in the stricken areas.

Zaka has great experience in this area, having dealt with the aftermath of numerous terror attacks in Israel. Its volunteers have undergone rigorous training and are among the first to arrive on the scene minutes after any terror attack in Israel. The volunteers will operate under the command of Chief of Louisiana Police, Colonel Henry Witthorn.

Private companies are contributing as well. The government’s Foreign Ministry has stepped in to coordinate the private contributions Israeli companies are making — offers have already come in from manufacturers of baby formula and cleaning supplies.

Five Israeli universities announced they would welcome students from the areas stricken by the natural disaster. The Jewish Agency for Israel announced a partnership with the schools and Hillel: The Foundation for Jewish Campus Life to allow the students displaced by the hurricane to continue their studies.

Any college student from the Gulf area affected by the storm may apply late for the University’s Lowy School for Overseas Students, which is waiving deadlines and some requirements to make room for Katrina’s victims.

“In tragedies such as this, you desperately want to help, and these are two things the university can do – offer academic sanctuary to Tulane medical students and an overseas program to other Gulf-area students whose campuses have been destroyed,” said Itamar Rabinovich, president of Tel Aviv University.

Both the Sackler School of Medicine and the Lowy School programs are conducted in English.

Not only large organizations are reaching out. Although their contributions will be miniscule compared to the amount of money that is going to be necessary for the recovery efforts, smaller groups, synagogues, and individual Israelis are dipping into their own pockets in an effort to help the flood victims. The telephone numbers of organizations that are channeling funds to the American Red Cross and the United Jewish Communities’ emergency fund have been on television screens and newspapers and many Israelis are answering the call for help.

One Conservative congregation in Jerusalem – Moreshet Avraham – has launched a campaign to raise funds for the victims of the flood among its congregants, many of whom are dual US-Israeli citizens. The funds will be channeled to relief organizations

“There should be some type of balance between giving and taking. There isn’t an institution in Israel – including the state itself – that doesn’t rely on funding from organizations or the government in the US,” said the congregation’s rabbi Barry Schlesinger.

“Our congregation has been receiving aid from the US for 20 years, and our building was built with the help of generous Americans. This is a way – even under these unfortunate circumstances – to say thank you.”

Merryl Kaplan of Ra’anana was moved by similar circumstances to write to an email forum she belongs to and asked if there was any way she could help.

“I couldn’t stop thinking that America supports us through everything, and I felt like I had to do something – I couldn’t live with myself if I didn’t.”

Through the forum, she made contact with a family in Alabama who was taking in a number children who had lost everything in the aftermath of the hurricane. They told her what they needed in a very specific list of clothing and toiletries and she is in the process of putting together a care package that will be sent from Israel to provide the items.

The scenes of destruction on their television sets have been most painful for those Israeli-Americans who immigrated from the New Orleans area.

Rabbi Victor Hoffman, who lives in Jerusalem, was the rabbi of the Tikvat Shalom Conservative congregation in New Orleans between 1969 and 1981, said the pictures have been “horrifying and shocking.”

He said has seen from his fellow Israelis “an outpouring of care and concern – and some have already turned to me to ask where they can make a contribution.”

For the past several days, he has been on the telephone with other immigrants from New Orleans to Israel, exchanging information about friends and family.

“We are talking about mutual friends we know –have you heard from this one, or heard from that one, who are all now scattered throughout the United States, and commiserating with the incredulousness of the whole thing. It’s hard to grasp. I’ve gotten a steady flow of emails from people I know there and some are seriously considering permanently relocating in other places. They loved New Orleans, but believe the economy there may not be viable for the next 8-10 years.”

He said that from aerial photographs he has seen, it appears that both the synagogue that he served in as well as others are nearly completely underwater, as well as the house he lived in there

Kathy Rasner, a New Orleans native who moved to Israel 18 years ago, had been in the city just days before the hurricane hit, attending her father’s funeral. Luckily, her Israeli husband had stayed on and was able to help her mother evacuate her home in time and relocate to a relative’s home in Houston on one of the last flights to leave the city.

“I’ve been like a zombie, I’m totally stressed out, obsessively watching the news, reading web sites, and searching for friends. I’m in shock, it’s just utterly shocking to see these pictures when it’s a place you grew up in and love. When my husband and I lived in the US for many years, we watched and worried when something happened in Israel. I’ve now lived it from both sides.”

UNCOVER ISRAEL - Get the ISRAEL21c
Weekly Edition free by email
Sign Up Now!
Bring Israel's story to life.
Millions of people around the world rely on us to gain a deeper understanding of Israel. We are the trusted source for original content you won't find anywhere else.
You can make a difference. Donate today to support journalism that brings Israel’s story alive.
SUPPORT ISRAEL21c
Read more on:   Social Action, Israel Flying Aid, Hurricanes