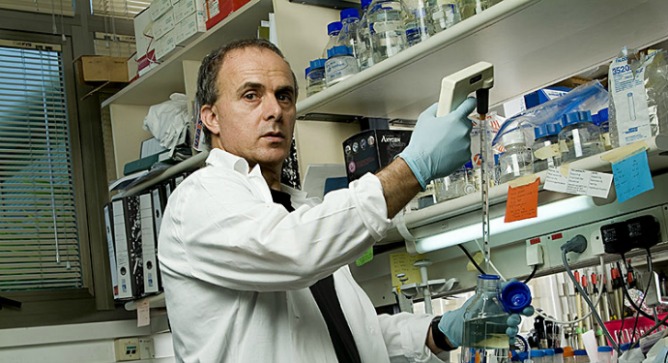 Breast cancer can be curable if it’s caught soon enough – unless it is the “triple negative” type more likely to target young, black or Hispanic women.

Israeli researchers from the Weizmann Institute of Science in Rehovot are opening a new window of hope for the daughters and granddaughters of women diagnosed with triple-negative breast cancer. The cancer carries a strong genetic link and it is also found in people of Jewish Ashkenazi (Eastern European) ancestry.

“It’s quite a difficult disease,” says Prof. Yosef Yarden, a lead researcher in the new study from the institute’s Biological Regulation Department. “Women who are initially treated with chemotherapy show a good response, but they eventually develop resistance to the chemical therapy. They die within seven or eight years,” he tells ISRAEL21c.

Yarden and his colleague Prof. Michael Sela have determined that a two-antibody approach may increase survival rates, and reduce the odds of reoccurrence.

The cancer is called “triple negative” because it is lacking three hormone receptors that give fuel to most cancerous tumors –– estrogen, progesterone and HER2.

Successful hormone blockers like Herceptin do not work, and there is no solution for triple-negative cancer, Yarden says.

The Israelis’ experimental approach employs tactics to mimic the way the body normally defends itself against cancer.

As scientists do, Yarden and Sela began by studying the scientific literature to see what’s been done to solve the problem of triple-negative breast cancer. They challenged themselves to target the cancer in a new way: Instead of attacking one antibody on the tumor surface, which is how Herceptin works, they would look for another doorway.

They read that about 30 percent of all women with triple-negative cancer had higher than normal rates of EGFR, a growth hormone receptor. This presented a unique subtype of the triple-negative breast cancer to research.

Drugs that block EGFR have proven ineffective against these tumors. Going back to the drawing board, the Israeli team decided to deliver a double punch by combining two different antibodies to two different parts of the receptors.

And their hunch showed a positive effect: Breast-cancer cells shrunk in both animal models and in the Petri dish.

If this approach is developed into a drug, it might treat about five percent of all breast cancer patients, a meaningful proportion considering the aggressiveness of triple negative, says Yarden.

In their studies, the researchers subsequently uncovered a new cancer-blocking mechanism: using the double antibody approach, they were not only able to block EGFR, but the sheer weight of the antibodies attaching to the tumors caused individual cancer cells to collapse.

While the tests are very positive, they have only been done on animals so far. Further collaboration with pharmaceutical companies will be needed to fund progress toward a viable drug alternative, Yarden says.

After their research was published in The Proceedings of the National Academy of Sciences, industry and potential research partners started reaching out.

A new antibody is sought –– one that could synergistically activate the two already on the market. These two existing antibodies do not show a synergistic effect since they are both attracted to the same receptor on the cancer cell.

Genetic engineering and a molecular approach might be a step in the right direction, Yarden surmises.

A vaccination against cancer would be the ultimate goal.

“What we are doing is the building block for future vaccines –– either in active immunotherapy, where a patient will actively make antibodies; or in a passive approach, where we will provide the antibodies to the patient. Passive is used widely, while active is kind of a dream and a vision for the field. We have a much longer way to go,” says Yarden.

UNCOVER ISRAEL - Get the ISRAEL21c
Weekly Edition free by email
Sign Up Now!
Bring Israel's story to life.
Millions of people around the world rely on us to gain a deeper understanding of Israel. We are the trusted source for original content you won't find anywhere else.
You can make a difference. Donate today to support journalism that brings Israel’s story alive.
SUPPORT ISRAEL21c
Read more on:   Health, Weizmann Institute, breast cancer, Yosef Yarden