What genes hold the key to longevity? Why does long life run in certain families? Could age-related diseases be conquered by slowing the aging process? Why do people lose muscle mass as they age, and why do smokers lose it faster?

These are some of the questions Israeli biogerontologists are answering for a world where the average age is on the rise and the number of people 65 and older is expected to double by 2040.

A hot topic across the globe, the biology of aging has been greatly advanced by contributions over the past 40 years from Israel, beginning with Amiela Globerson and David Danon of the Weizmann Institute of Science along with Dr. David Gershon from the Technion-Israel Institute of Technology.

Recently, prominent Israelis in this field at home and abroad gathered with international counterparts at Ben-Gurion University of the Negev (BGU) for the eighth European Congress of Biogerontology — the first time this event was held in Israel.

“The role of Israeli scientists in this conference is large, and their breakthroughs from the past couple of years are significant,” says Ilia Stambler, a Bar-Ilan University expert in the history of life-extension research. “Hosting a conference at this level shows a lot of confidence in Israeli science in this area.”

Two of the foremost researchers in longevity are Israeli endocrinology specialists Dr. Nir Barzilai and Gil Atzmon of the Albert Einstein College of Medicine in New York.

Their groundbreaking 10-year Longevity Genes Project at Einstein studied 540 healthy Ashkenazi Jews between the ages of 95 and 112 and their children. The study attempted to understand the biology of why humans don’t all age at the same rate, and why only one in 10,000 individuals lives to 100.

The centenarians were found to have genetic protective factors (“longevity genes”) that help them beat the odds – no matter their lifestyle. One of the women was a heavy smoker, nearly half were overweight and only 2.3 percent ate a vegetarian diet.

“That’s only the case for one in 10,000. We still think the environment plays an important role for most of us,” Barzilai stresses, countering a Jay Leno monologue that used the project results to quip that the secret to long life is more partying.

People have strong ideas about why they live longer, Atzmon says. “If you ask the Japanese, it’s fish and vegetables. If you ask the Chinese, it’s green tea and ginseng, the French say it’s the wine and the Americans say exercise. Sixty percent of our subjects in the Longevity Genes Project said it was to be happy.”

But there’s no discounting the genetic factor.

A group of graduate students working under Prof. Vadim Fraifeld at BGU’s Lab for the Biology of Aging won several recent awards for studies including how longevity genes act as a network.

“Based on this network, we predicted dozens of new longevity genes, and our prediction was confirmed experimentally at the lab of Gary Ruvkun from the Harvard Medical School,” says Fraifeld, who chaired the organizing committee for the congress.

By modulating the activity of these genes in advanced age, it could be possible to combat major diseases.

“Although an apparent paradox, it appears that the most effective way to delay or even to avert age-related diseases is to live longer,” Fraifeld tells ISRAEL21c.

‘Doing something radical about aging’

For most people, however, aging comes along with a greater risk for cardiovascular disease, cancer, arthritis, cataracts, osteoporosis, diabetes, hypertension and Alzheimer’s. Most scientists now believe these diseases are part of the “normal” aging process.

“You cannot radically do anything about age-related diseases without doing something radical about aging,” says Fraifeld. 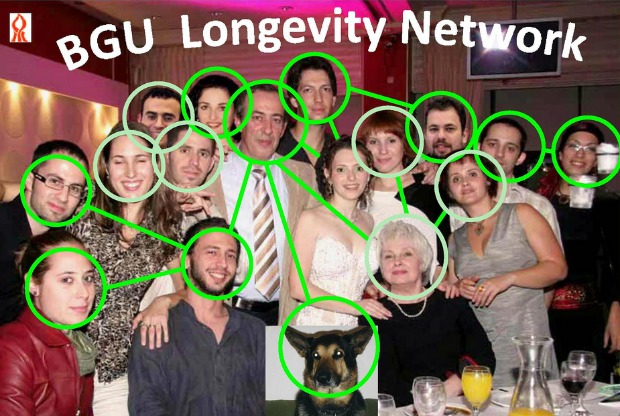 “Here is an example of where science is converging with public-health policy. Considerable investment should be redirected with a focus on the biology of aging, because otherwise we cannot expect progress in preventative medicine.”

Israelis are finding clues that may help.

Last year, Bar-Ilan University molecular biologist Haim Cohen revealed in Nature that over-expression of the protein SIRT6 increased survival rates in male laboratory mice by as much as 15 percent above normal, catching them up to their naturally longer-living female peers.

Cohen tells ISRAEL21c he is now injecting SIRT6 selectively to determine which body tissues are most critical to longevity.

This protein works its magic by regulating DNA repair, says Weizmann PhD Vera Gorbunova, who heads a lab on aging, DNA repair and cancer at the University of Rochester, New York.

“There is an amazingly strong correlation found between double-strand [DNA] break repair and longevity,” says Gorbunova. This could be why naked mole rats are resistant to cancer and live 30 years or more, while similarly sized mice don’t make it past age three.

“Could we take SIRT6 from a long-living species and put it in a mouse to improve DNA repair?” Gorbunova wonders. “We are optimistic about this.”

Smokers get flabbier in old age

Everyone loses 30-40 percent of muscle mass in a progression that begins at age 30 and speeds up after 60, according to Technion-Israel Institute of Technology Prof. Abraham Reznick. 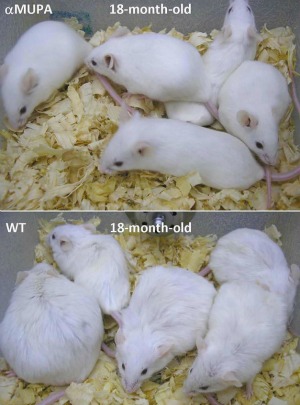 Prof. Ruth Miskin’s alpha-MUPA mice are thinner and in better shape than their wild-type (WT) peers at 18 months, the equivalent human age of 72.

Just compare bare-chested photos of Arnold Schwarzenegger in his bodybuilding days and in his later governor days – or for that matter, photos of Reznick himself, nicknamed “The Flying Man” as a teen and now nearing retirement. “You don’t want to see my muscles today!” he jokes.

But smokers lose muscle mass at a faster rate, and Reznick’s team has found out why. As they describe in five recently published papers, the Israelis identified acrolein as the specific cigarette smoke component that breaks down muscle. Removing acrolein from cigarettes might help smokers retain more strength as they age.

“We studied how the smoke activates a molecular pathway leading to degradation,” Reznick says. “It causes oxidative stress in the cells and it’s downhill from there. But every one of the steps can be inhibited.”

Among other Israelis whose work was presented at the congress were Weizmann Prof. Ruth Miskin, developer of a strain of mice that eats less and lives longer; Technion Prof. Doron Melamed, who showed that old, damaging immune cells can be eliminated in animals (and perhaps in humans); Shai Shen-Orr, whose Technion lab developed a model to understand how the immune system works in advanced age, and defined biomarkers to evaluate immune health; Tel Aviv University Prof. Louis Shenkman, who found a simple biomarker for biological age in humans; and BGU professors Esther Priel and Gideon Grafi, who found that aging cells pass through the stem cell-like state at which they could be re-directed. Priel is synthesizing compounds that extend the lifespan of mice while lessening neurodegenerative changes.