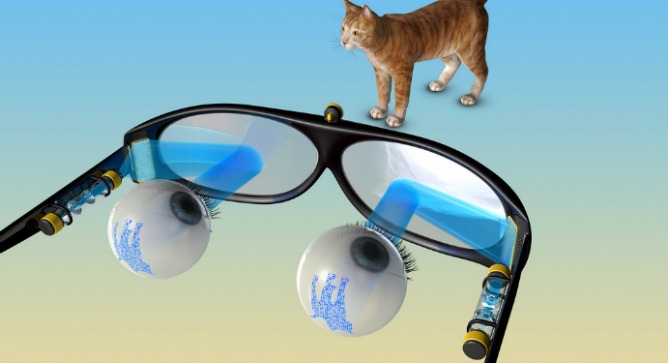 Israeli researchers are using holography to artificially stimulate cells in the eye, with hopes of developing a new strategy for bionic vision restoration.

About one in 4,000 people in the United States suffers from retinitis pigmentosa (RP), a genetic disease of the retina that causes light-sensing cells to degenerate and eventually leads to vision impairment. Symptoms might start as night blindness.

Recent advances in optogenetics have opened the possibility of restoring light sensitivity to vision cells using a simple injection and gene-based therapy. But how can these newly programmed cells reconnect with the brain to process images? This is the million-dollar question.

Israeli researchers from the Technion-Israel Institute of Technology in Haifa have found a futuristic and bionic way to bypass neural circuitry and directly stimulate restored vision cells with a computer-driven technique called holography.

The researchers have developed a tool to photo-stimulate retinal cells with precision and high resolution, suggesting that one day in the not-so-distant future, people blinded by RP may see beyond shadows once again.

“It’s something like Google Glass for the blind,” Prof. Shy Shoham from the Technion tells ISRAEL21c, referring to Google’s wearable computer with a head-mounted display, set to be released later this year.

“We did not develop optogenetics and it’s a young technology, but it is firmly established and the potential is recognized. What is missing, and what we are offering, is a powerful solution driving the neural networks of these optogenetically restored cells.”

Shoham explains, “What our system will do is activate these cells with patterns. It’s a system that drives the projection of ‘movies’ powerful enough to stimulate retinal cells artificially.”

Like any responsible scientist, Shoham, an engineer and lead scientist of this new research presented in Nature Communications, is not offering false hope to people who are already blind. Unfortunately, he cannot help them.

But if a significant financial investment were to be made in the project, “clear” results could be seen in the future.

Restoring sight in mice; humans next?

“The basic idea of optogenetics is to take a light-sensitive protein from another organism, typically from algae or bacteria, and insert it into a target cell, and that photosensitizes the cell,” Shoham explains.

However, the genetically repaired cells are less sensitive to light than normal healthy retinal cells, so they need a bright light source — a laser, or in the new research project, a holograph — to be activated.

The researchers plan to develop a prosthetic headset that looks like the new Google Glass, or create an eyepiece that would translate visual scenes into light, which would stimulate the genetically altered cells.

The Israeli scientists used computer-generated holography to stimulate repaired retinas in mice. The light stimulus was intense, precise and capable of stimulating many cells at one time, which are all necessary for proper vision.

They previously tried lasers and digital displays used in projectors, but both approaches had their drawbacks.

“Lasers give intensity, but they can’t give the parallel projection” that would simultaneously stimulate all the cells needed to see a complete picture, says Shoham. “Holography is a way of getting the best of both worlds.”

This new approach could power new retina prostheses being tested in the United States. One called Argus II was approved by the US Food and Drug Administration (FDA) early this year, but offers only rudimentary vision to the wearer.

“You need to be careful with these things so the technology doesn’t run ahead of us,” Shoham cautions. “The system we are working on can potentially restore vision that is very high quality. But it will take at least five to 10 years.”

The technology also has many potential applications in the field of virtual reality.

UNCOVER ISRAEL - Get the ISRAEL21c
Weekly Edition free by email
Sign Up Now!
Bring Israel's story to life.
Millions of people around the world rely on us to gain a deeper understanding of Israel. We are the trusted source for original content you won't find anywhere else.
You can make a difference. Donate today to support journalism that brings Israel’s story alive.
SUPPORT ISRAEL21c
Read more on:   Health, Research, Shy Shoham, retinitis pigmentosa, Google Glass, retina prostheses