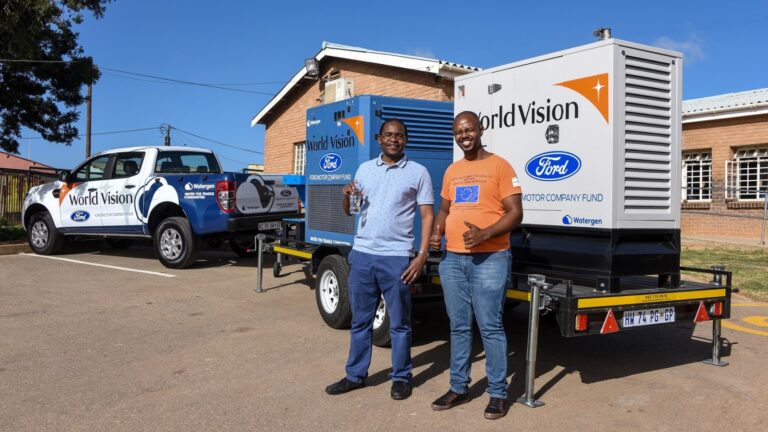 Israel is not a country known for its immense water resources. As such, the question of water supply and availability is never too far away in the minds of many Israelis, leading to plenty of technological innovations in the field.

One major innovation in recent years has been the technology created by Watergen, which produces clean drinking water from the air, greatly aiding areas struck by disasters and water pollution. It is now being harnessed in the South African province of Eastern Cape, which like much of the country has been suffering from severe drought in the last few years.

Watergen’s technology is being deployed by the World Vision South Africa aid organization in collaboration with the Ford Motor Company Fund to produce fresh and safe drinking water to thousands of residents in the province, servicing some 3,400 households as well as dozens of early childhood development centers and schools.

The company’s GEN-350 is an atmospheric water generator that can produce up to 900 liters of water per day from the air by purifying atmospheric moisture through an internal water-treatment system. The portable unit requires no infrastructure except for electricity, which can be provided either from a power grid or a generator, as will be the case in South Africa.

“We are thrilled with this shared cooperation,” Watergen president Dr. Michael Mirilashvili says of his company’s participation in the humanitarian effort. “We share the same goals of assisting communities all around the globe.”

Watergen was awarded this year with the CES Innovation Award, the Consumer Technology Association’s annual competition honoring outstanding design and engineering in consumer technology products. A year earlier it earned a place on the World Economic Forum’s list of the world’s top technology pioneers for its efforts to make clean water available around the world.

UNCOVER ISRAEL - Get the ISRAEL21c
Weekly Edition free by email
Sign Up Now!
Bring Israel's story to life.
Millions of people around the world rely on us to gain a deeper understanding of Israel. We are the trusted source for original content you won't find anywhere else.
You can make a difference. Donate today to support journalism that brings Israel’s story alive.
SUPPORT ISRAEL21c
Read more on:   News, Environment, Social Action, Watergen