View of the full installation at which testing of the solar generator will be performed as part of NASA’s Materials International Space Station Experiment. Photo courtesy of BGU

Israel’s Beresheet spacecraft didn’t quite succeed in its moon mission, but that isn’t stopping Israelis from continuing to send new technology up into space.

Other than an unfortunate crash landing, the biggest obstacle to space travel is power. Fortunately, there’s plenty of that from the sun. The challenge is how to capture solar energy efficiently and cheaply.

The latter is especially crucial for private space missions, where solar power systems represent a significant part of the total cost. 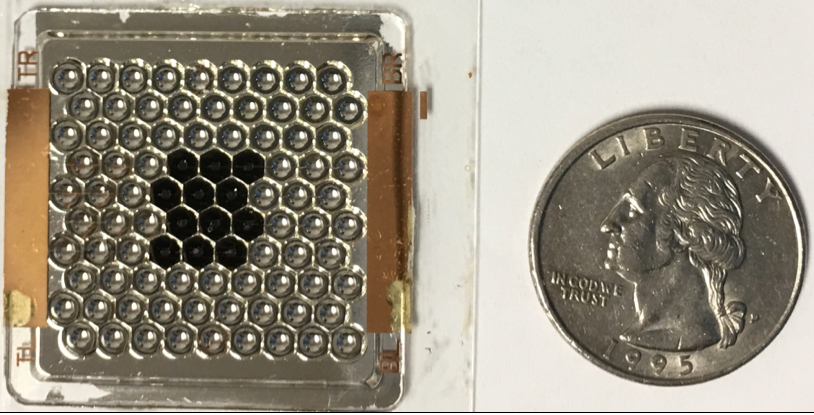 To address the needs of the rapidly growing, billion-dollar private space market, researchers at Ben-Gurion University of the Negev have designed a miniaturized solar-power generator to propel future space missions using an ultra-compact unit no thicker than a coin.

NASA is sending it up to the International Space Station on its first launch of 2020. The aim is to evaluate its stability under intense cosmic radiation and the enormous temperature swings in space.

The 1.7-millimeter-thick prototype consists of 90 lightweight molded-glass solar concentrators. Attached to each concentrator is asquare micro solar cell (0.65 millimeters long on each side) comprised of several materials to best capture energy from most of the solar light spectrum.

The prototype is designed to handle the kinds of structural vibration and thermal distortion that occur when traveling outside Earth’s atmosphere.

The BGU-led team is already working on a second-generation prototype with solar cells that are only 0.17 millimeters long on each side. For perspective, the thickness of a standard sheet of paper is 0.10 millimeters.

The team’s design and experimental verification was published in the scientific journal Optics Express.

The researchers have already set their gaze toward operating in deep space, such as missions to Jupiter and Saturn, where low weight and efficient electric propulsion will make or break an expedition that far from Earth.

The BGU solar power prototype is not the only Israeli-made space technology heading skyward. A prototype of Tel Aviv-based StemRad’s AstroRad anti-radiation vest is on its way to the International Space Station.

In 2020, the AstroRad vest will be worn by a mannequin in an unmanned test of the Orion space command module. If the experiment is a success, the Israeli vest could be worn by the next astronauts to set foot on the moon in 2024’s Artemis program.