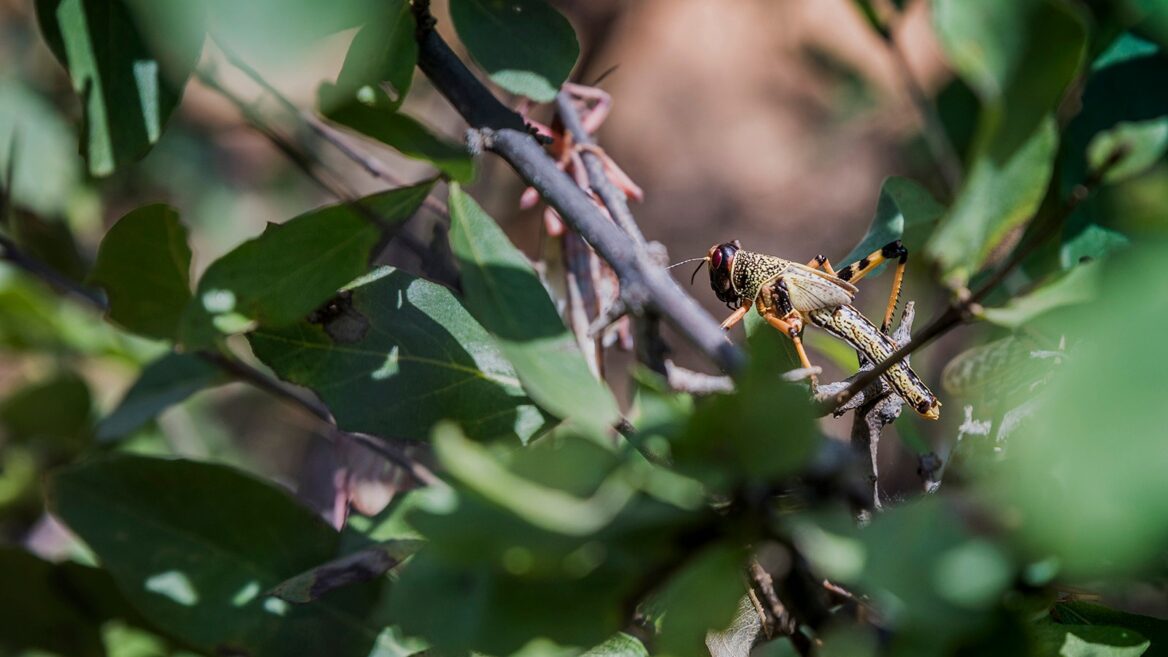 A desert locust in the Somali region of Ethiopia, December 2019. Photo ©FAO/Petterik Wiggers

Some call it a plague. Yoav Motro calls it a war.

The enemies are huge armies of desert locusts destroying farm and grazing lands across nine East African countries. In Ethiopia alone, the locusts have conquered three million acres since January.

Motro, the vertebrates and locust specialist for Israel’s Ministry of Agriculture and Rural Development, captained a successful battle against these winged creatures in Israel in 2013. He works diligently with regional partners to assure they won’t return.

When the Food and Agricultural Organization (FAO) of the United Nations approached Israel for financial support for Ethiopia in fighting these most destructive migratory pests in the world, Motro felt that wasn’t sufficient. 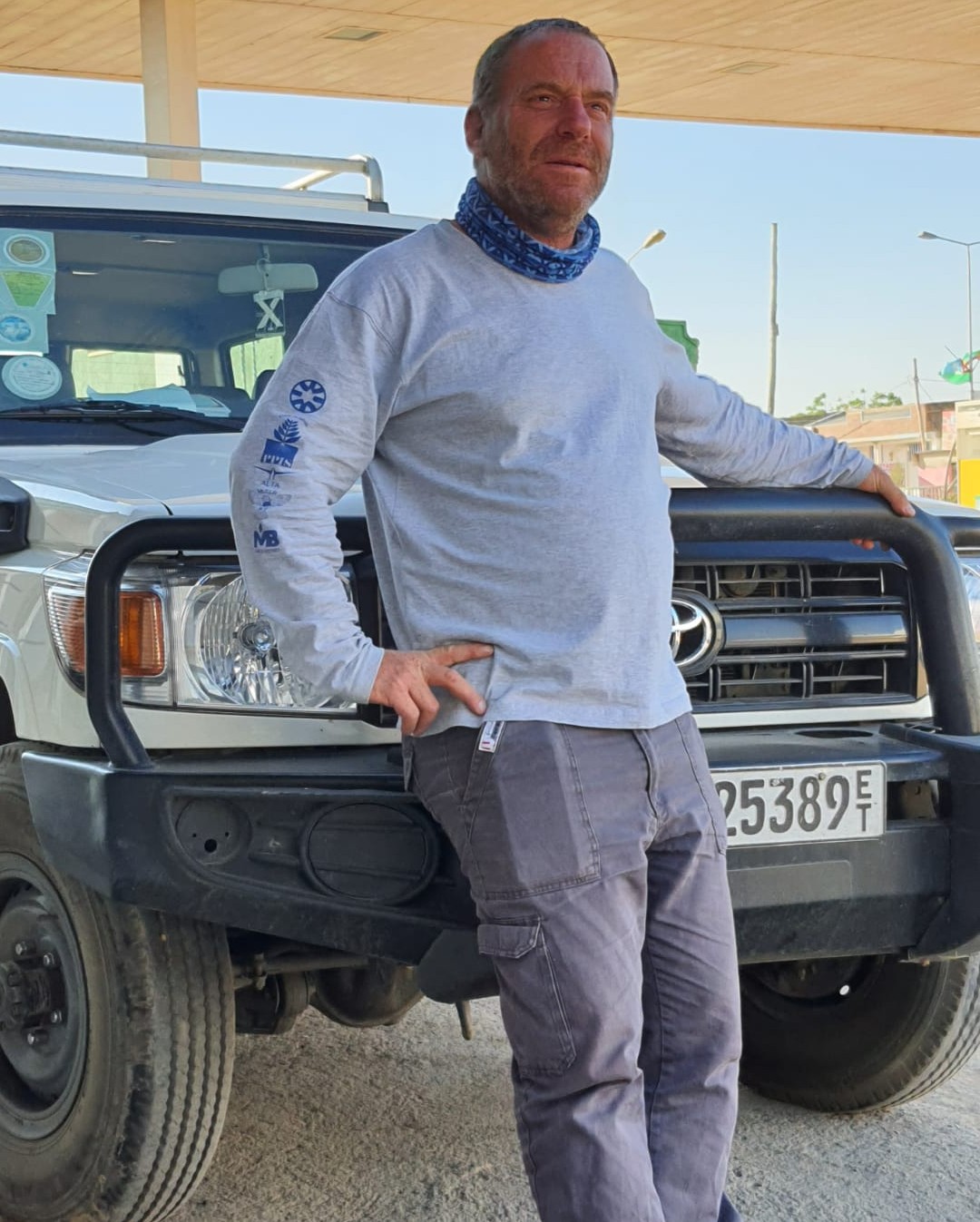 “I said, ‘I have a better idea: to help them help themselves.’ We can do that by bringing the correct equipment with us and training them to use it.”

The Israelis handed the Ethiopians a “fishing rod” – in the form of 27 surveillance drones, 100 motorized backpack sprayers and in-person training – enabling locals to vanquish the locusts on their own in the future. 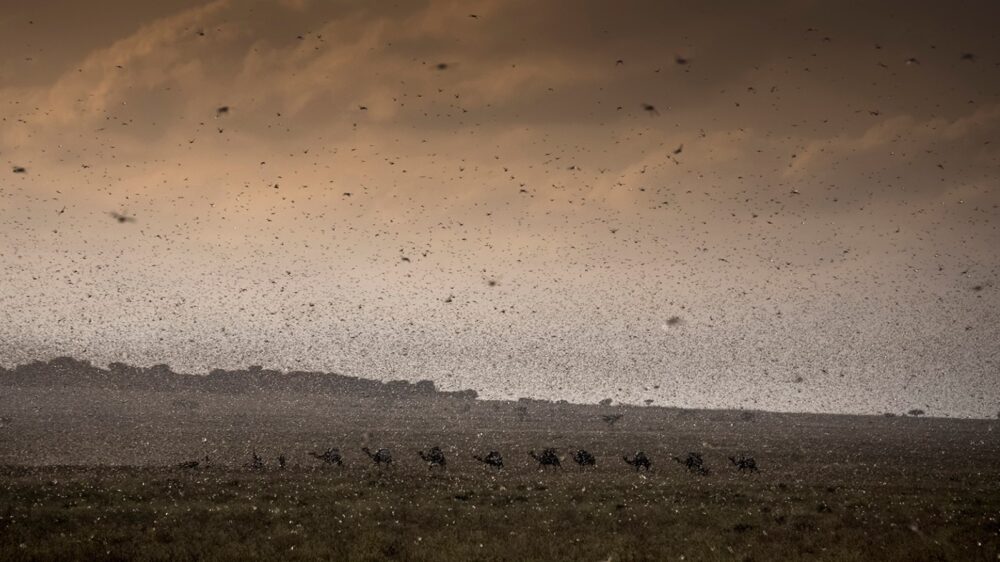 A herd of camels wends its way through an invasion of desert locusts in Jijiga, in the Somali region of Ethiopia. Photo ©FAO/Petterik Wiggers

The Agriculture Ministry and MASHAV, the Israeli Foreign Ministry’s agency for international development cooperation, footed the bill for the trip and equipment. The Israeli Embassy in Ethiopia coordinated the mission with local authorities. 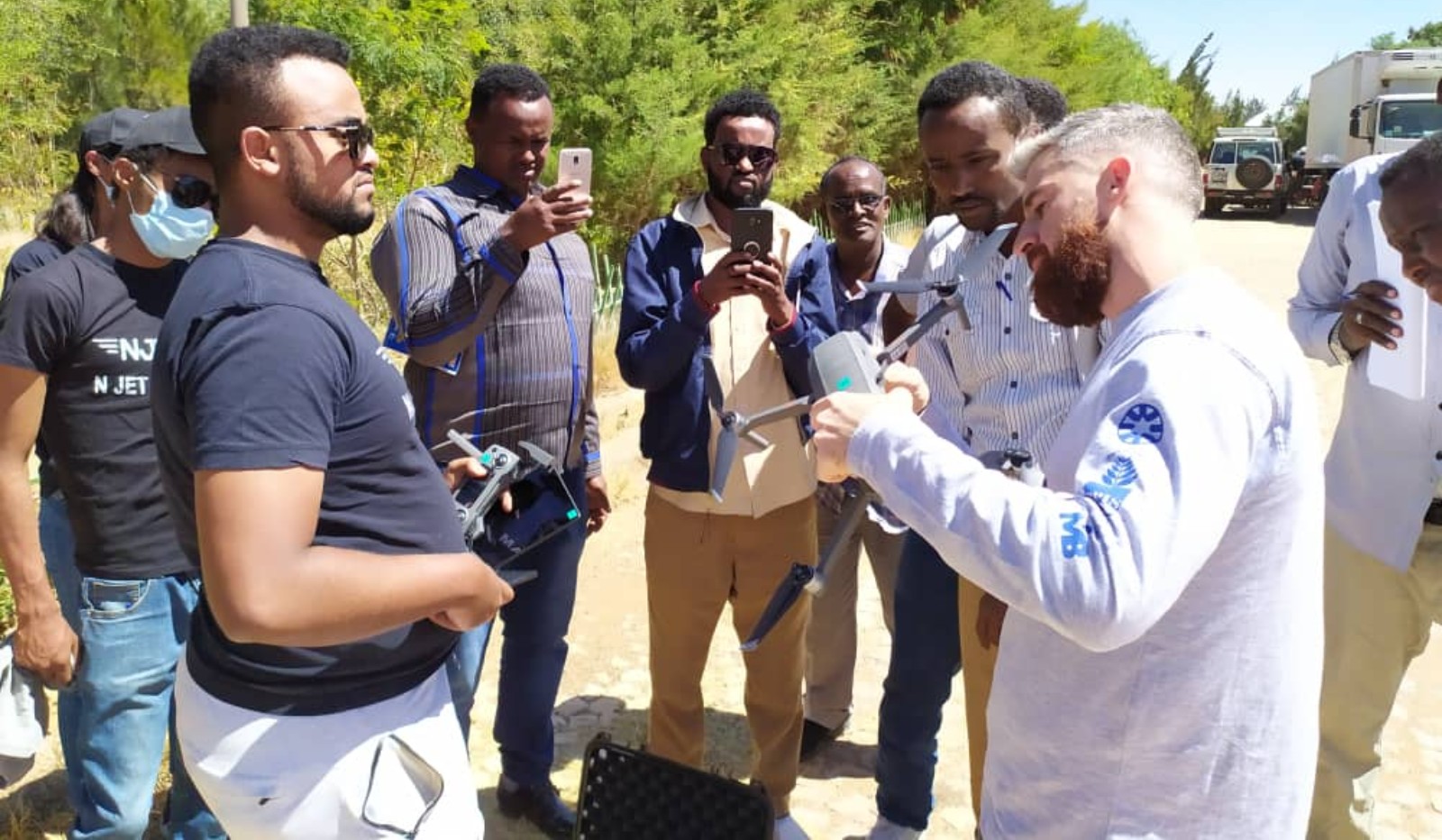 “It’s a novel method based on what we learned in 2013: To attack the locusts at night when they are asleep. That gives us an edge,” Motro tells ISRAEL21c.

“Tomer taught a group of scouts – mostly university students, because they have to know how to read English — to track the swarms, using drones, to the exact location where they sleep,” says Motro. 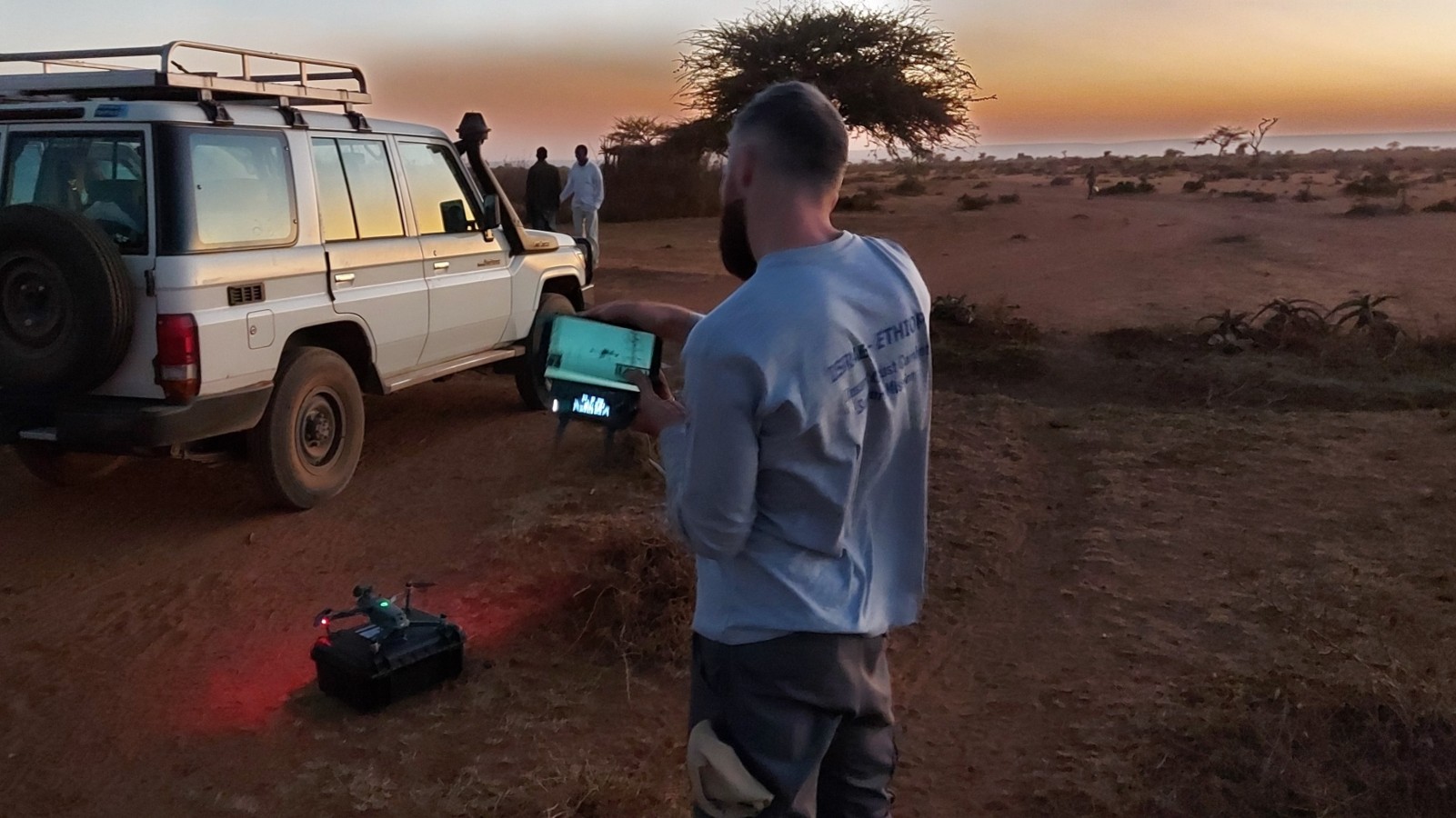 “Tamir taught people from the regional bureau the logistics of bringing personnel and equipment to the point where the scouts say they need to do the nighttime spraying,” he continues. 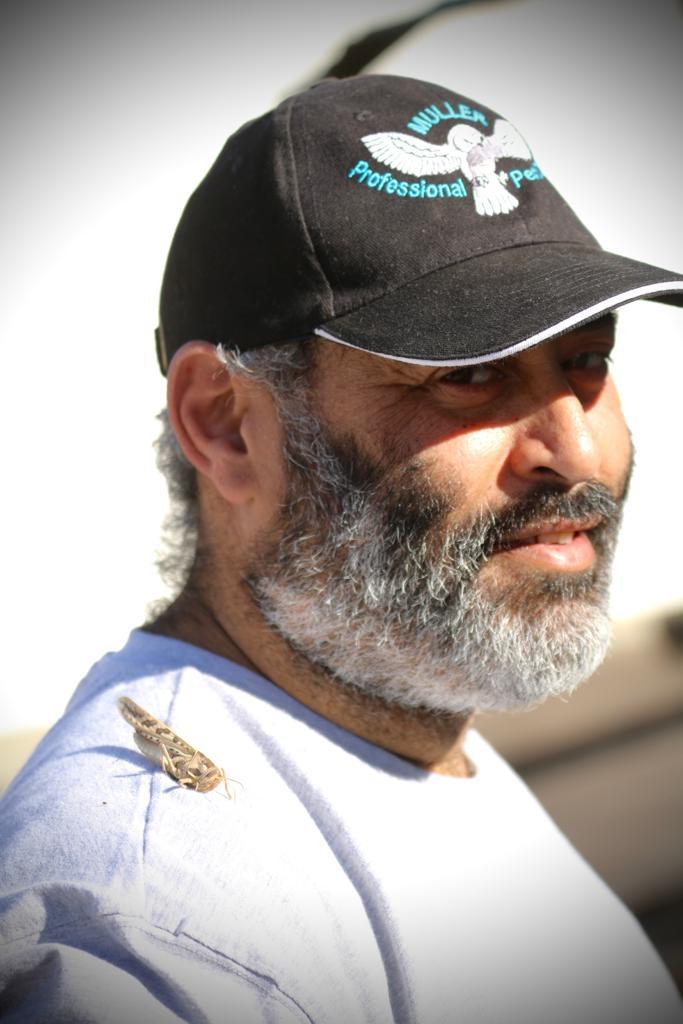 Yoav Muller with a desert locust on his shoulder in Ethiopia. Photo by Yoav Motro

“Yoav trained the sprayers. Most of them were farmers, and some had never operated anything with an engine before. It was a giant leap of technology for them.”

These subsistence farmers, he adds, “eat what they grow. If they don’t have crops, they don’t have money to buy any, and their neighbors are in the same situation. They were already on the verge of starvation before the locusts.”

According to the FAO, 40 million to 80 million locusts can converge in a single swarm over a square kilometer. In one day, they can consume crops that could have fed 35,000 people. 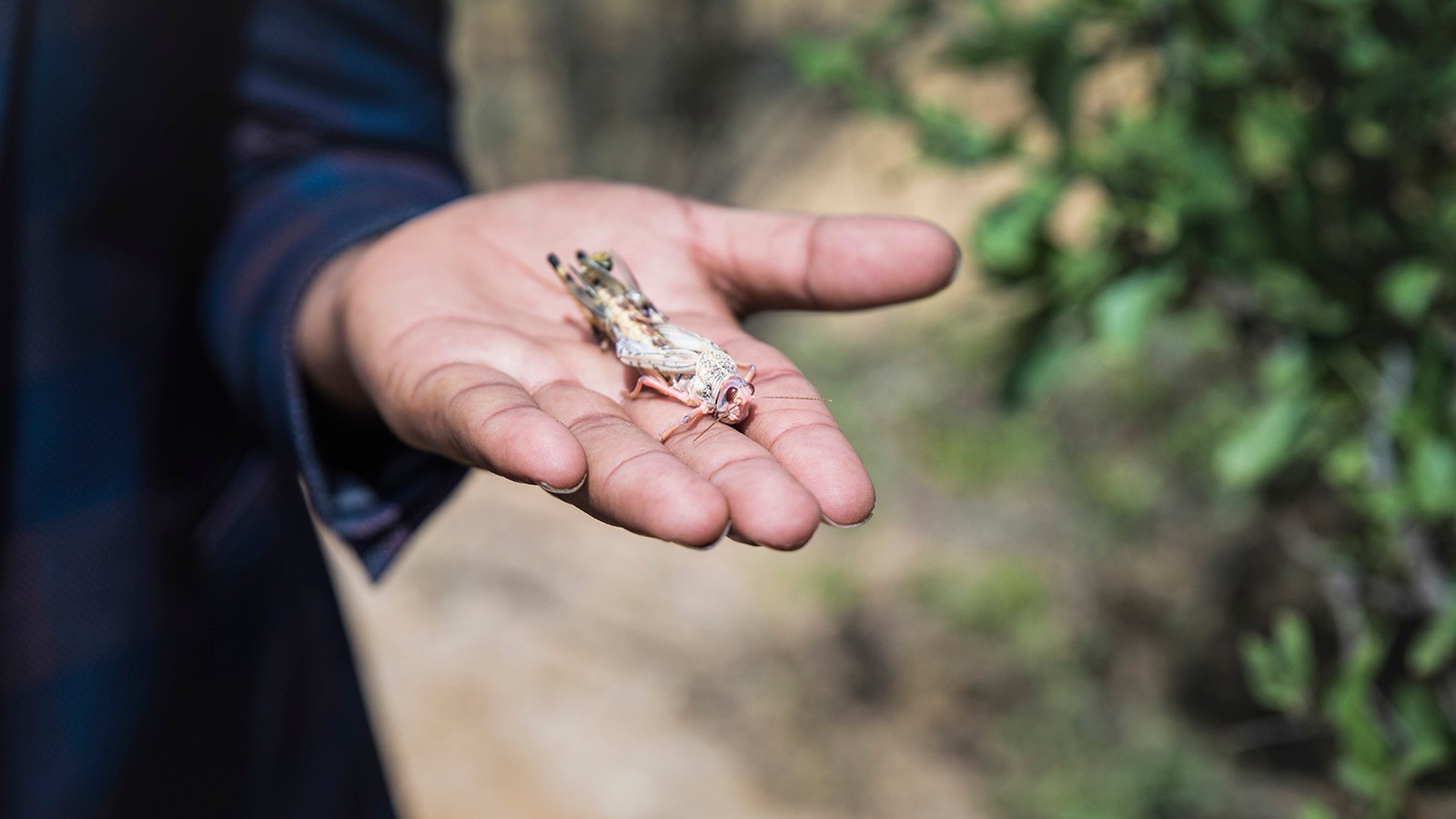 A farmer in Shilabo, in the Somali region in Ethiopia, holds a locust killed by spraying. Photo ©FAO/Petterik Wiggers

Before leaving Ethiopia on the night of November 25, the foursome left some equipment in Jigjiga and brought the rest to Addis Ababa – Ethiopia’s capital – where it will be dispatched to other regions that need it.

Motro was careful to bring brands of drones and sprayers that are available in Africa so they won’t be dependent on the Israelis to procure supplies.

The pesticide was a local brand because the pesticides used in Israel must be diluted with lots of water, a precious substance the Ethiopians cannot spare.

Motro and his team summarized the results of their efforts at a ceremony held in Israel’s embassy in Addis. They reported to the Ethiopian Minister of Agriculture that the training was a big success.

Motro, whose PhD is in the economic impact of using barn owls and other environmentally friendly methods to controlling crop-damaging rodents, birds and rabbits, hopes to make a follow-up trip to Ethiopia to monitor progress.

He wouldn’t be surprised if the Kenyan government asks for help, too. “The locust breeding is heading there as the wind blows in that direction,” he says.

Ethiopia and Kenya are not regularly plagued by locusts as are Saudi Arabia, Sudan and Morocco.

“This is a blessing, but on the other hand they are not prepared for when the locusts do come. It hasn’t been this bad in almost a century,” Motro says.

“We cannot say that this will solve the locust problem forever – it is not the end of the battle — but it will give them a chance.”