For the past year, a novel Israeli medical device has been changing the way American doctors remove fibro-adenoma tumors – benign breast lumps. Now an internationally renowned Japanese surgeon is testing IceSense3, made in Israel by IceCure Medical, to destroy small malignant tumors as well.

“This is the future,” CEO Hezi Himelfarb tells ISRAEL21c.

During an ultrasound-guided procedure, the IceSense3 probe penetrates the tumor and destroys it by engulfing it with ice. Needing only local anesthetic, the cryoablation process takes five or 10 minutes in a doctor’s office, clinic or breast center, and the patient can get up and leave afterward. No recovery period or post-care is necessary.

Before the Israeli device got US Food and Drug Administration approval in December 2010, many women preferred to simply monitor harmless growths instead of having a surgical procedure that is expensive, time-consuming and painful. The new solution, which is quick and virtually painless with no scarring, offers a more attractive option.

“I don’t know any woman who wants to get up every morning and feel a lump in her breast even if she knows it was diagnosed as benign,” Himelfarb says. “It creates anxiety because it might potentially hide other tumors, and it is preferable to get rid of it.”

Of course, if a tumor is cancerous there is no option to wait and see. A surgical lumpectomy or mastectomy must be done.

Dr. Eisuke Fukuma, chairman of the Breast Center at Kameda Medical Center in Kamogawa City, Japan, was so intrigued by IceSense3’s potential in this area that he flew all the way to IceCure’s Caesarea headquarters just for a four-hour meeting to lay the groundwork for clinical trials at his center.

On June 1, the first four patients in the trial had small tumors successfully destroyed with the device, and another 26 patients are scheduled. 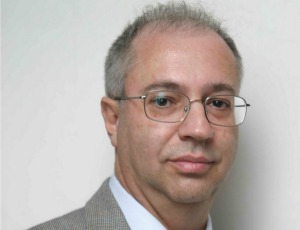 Fukuma had previously used a now-defunct company’s first-generation cryoablation device to destroy fibro-adenomas in 37 patients. He followed up over four years and reported a 100 percent success rate with no recurrences.

After that competitor company went bankrupt, Fukuma turned to IceCure when he was seeking next-generation technology to test cryoablation on cancerous growths of up to one centimeter. The entire trial is funded by his hospital.

Himelfarb says similar trials will soon begin in the United States, where the device is sold through a subsidiary established last year in Cleveland. The product also earned the CE Mark of approval in Europe, but hasn’t yet been put into use there.

Until recently, there would have been little opportunity for cryoablation of cancerous tumors because only a small proportion was discovered early enough for the procedure to be effective.

“Today, because of the awareness of the danger of breast cancer, screenings are done more often,” says Himelfarb, “so most of the malignant tumors are being detected in an earlier stage, which means they are still a small size.”

In May, Himelfarb attended a conference of the American Society of Breast Surgeons in Phoenix, Arizona. “There was a lot of buzz around cryoablation for small breast tumors instead of aggressive lumpectomy and mastectomy,” he says. “Everyone is looking for less invasive methods, and cryoablation seems to be the most promising technology for this application.”

IceCure was co-founded by cryogenics expert Dr. Alex Levin and businessman Didier Toubia in 2006 as part of the Naiot Venture Accelerator in Yokneam, an incubator for IT and life science startups. IceSense is based on a technology Levin patented in 2002.

Himelfarb, an electronics engineer who came to IceCure after 28 years in the medical devices industry, says that IceCure’s R&D team in Israel is developing a newer generation of IceSense as well as a device for treating uterine fibroids.