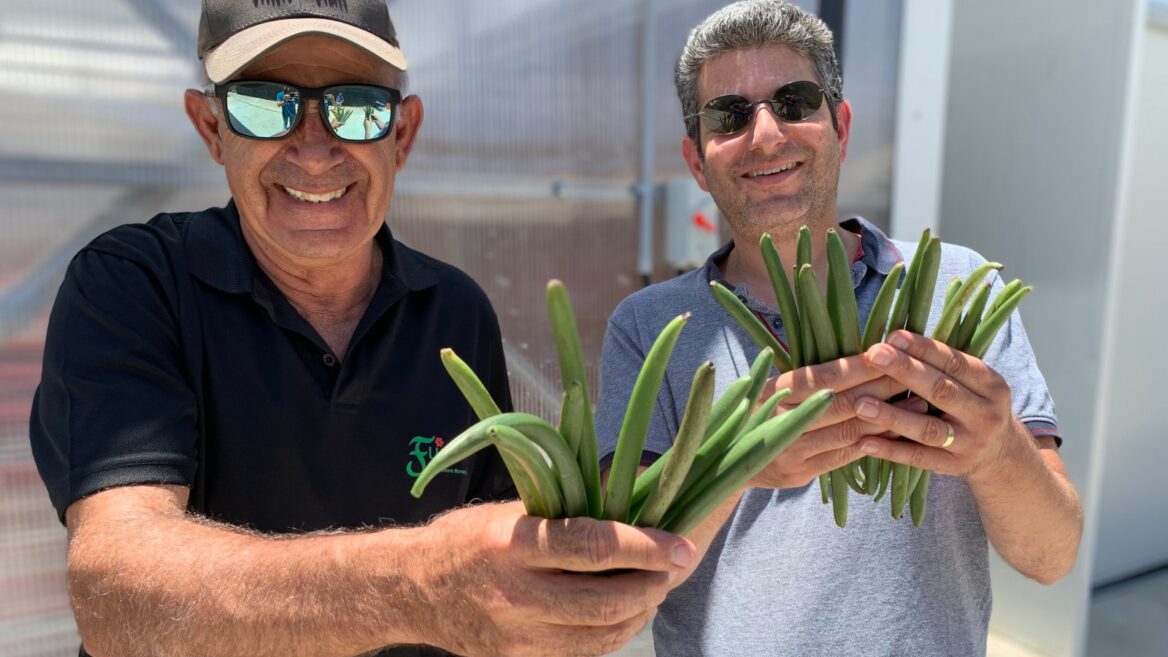 Vanilla is a paradox. One of the world’s most popular flavors is among the least studied.

And that’s why Oren Zilberman, CEO of the Israeli startup Vanilla Vida, sees the largely, uncharted territory of the great bean as a “blue ocean opportunity.”

“Our vision is to be the major producer of premium-quality vanilla,” Zilberman says. “We hope to take a 15 percent market share of the entire industry.”

With the industry generating upwards of $3 billion annually and growing, claiming significant market share is a bold quest.

Vanilla Vida has developed proprietary greenhouse methods to control how and when the valued orchid blooms.

The company delivers what it describes as a dramatically better bean positioned to disrupt the industry.

And by leveraging technology at every stage from growth to product, Zilberman believes the company’s end-to-end innovation will springboard it into the global flavor market. 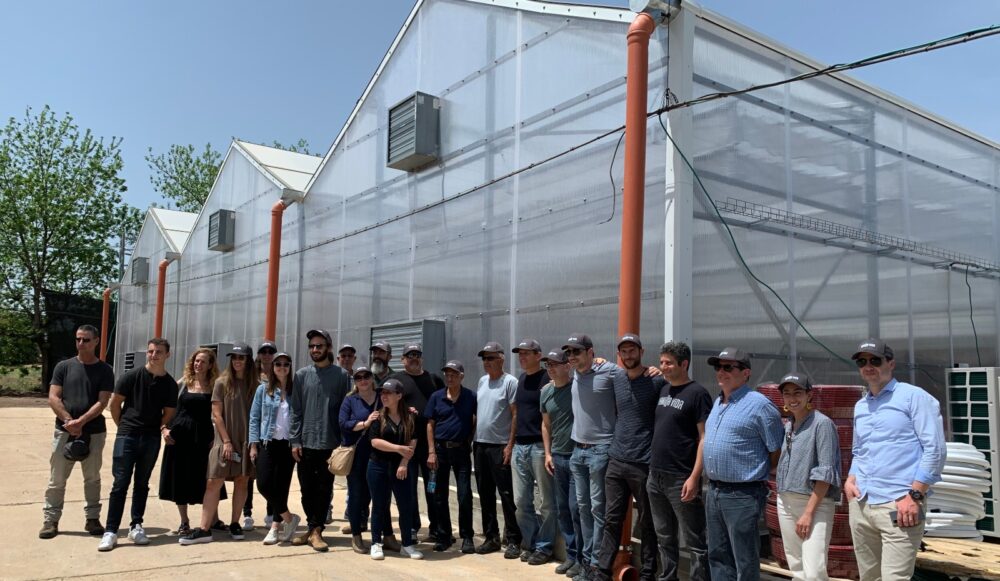 Employees, investors and advisory board in June 2021 at the launching of what Vanilla Vida considers the “most advanced R&D facility for vanilla research world over.” CEO Oren Zilberman is fifth from right. Photo by Bar Cohen

With the tagline “Natural Vanilla for All,” Vanilla Vida also operates joint ventures with established Israeli farmers to cultivate and cure that product using proprietary methods. 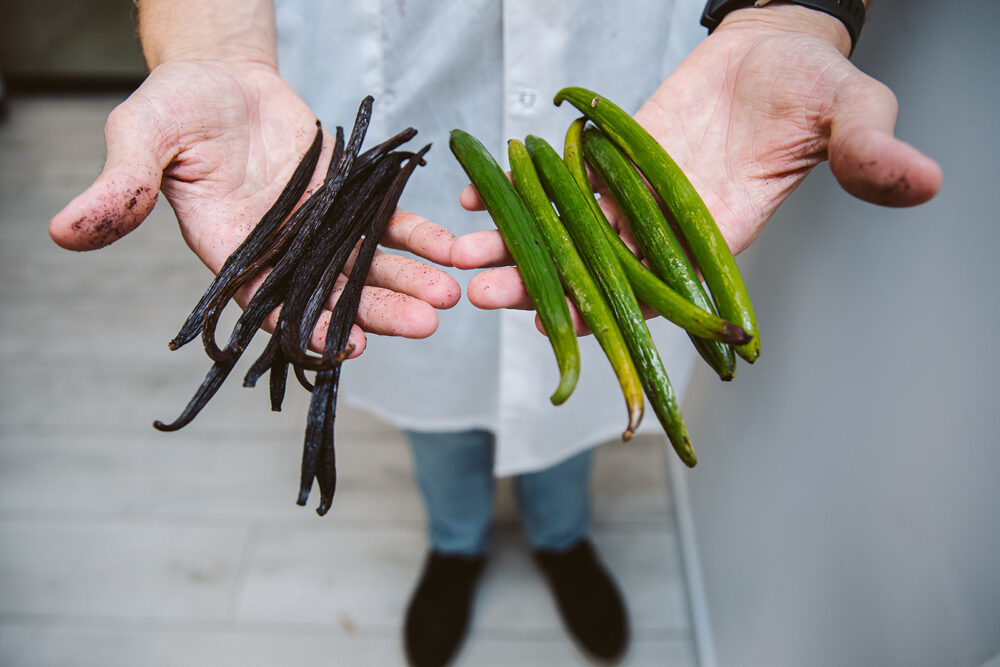 The goal is to disrupt the industry by driving down wholesale costs and drawing buyers among large-scale B2B customers who, in turn, provide essential ingredients to manufacturers of consumer goods.

And this will also help reduce dependence on synthetic vanillin produced from petrochemical raw materials.

The smell that everyone loves

The potential is exponential.

The market currently generates more than $3 billion annually in global sales of dried vanilla beans and another $20 billion in applications of vanilla extract in foods and beverages. A lesser segment is devoted to perfume and children’s medicine incorporating natural ingredients.

To meet that demand, the industry produces about 2,500 to 3,000 tons of dried vanilla beans a year, compared to 41,000 tons of artificial vanillin, which commands a much lower price and therefore constitutes about 95% of current consumption of what many consider the beloved flavor.

“The smell that everyone loves so much is not coming from the natural ingredient,” says Zilberman. “Maple is the same: you have synthetic and natural. But maybe it’s a 50-50 percent split of the market versus 95% synthetic vanillin to 5% natural vanilla. That’s crazy.”

Only the pure bean is packed with what chefs call “caviar,” those tiny flecks contained within the skinny, wrinkled, moist dark beans.

“Natural vanillin you can find only in vanilla,” Zilberman says. “Using advanced metabolic solutions, Vanilla Vida can produce much more aroma, and especially vanillin levels, compared to our competitors.”

Grown in tropical environments, the high-grade bean typically requires intensive labor, hand pollination and a drying process of four to six months. All this typically occurs under poor quality controls in developing countries.

Compare that to Vanilla Vida. The company boasts it produces five times as much vanilla per square foot and yields 80% more concentrated vanilla aroma and flavor per bean. It does so with 20% less growth time and 85% shorter curing periods. 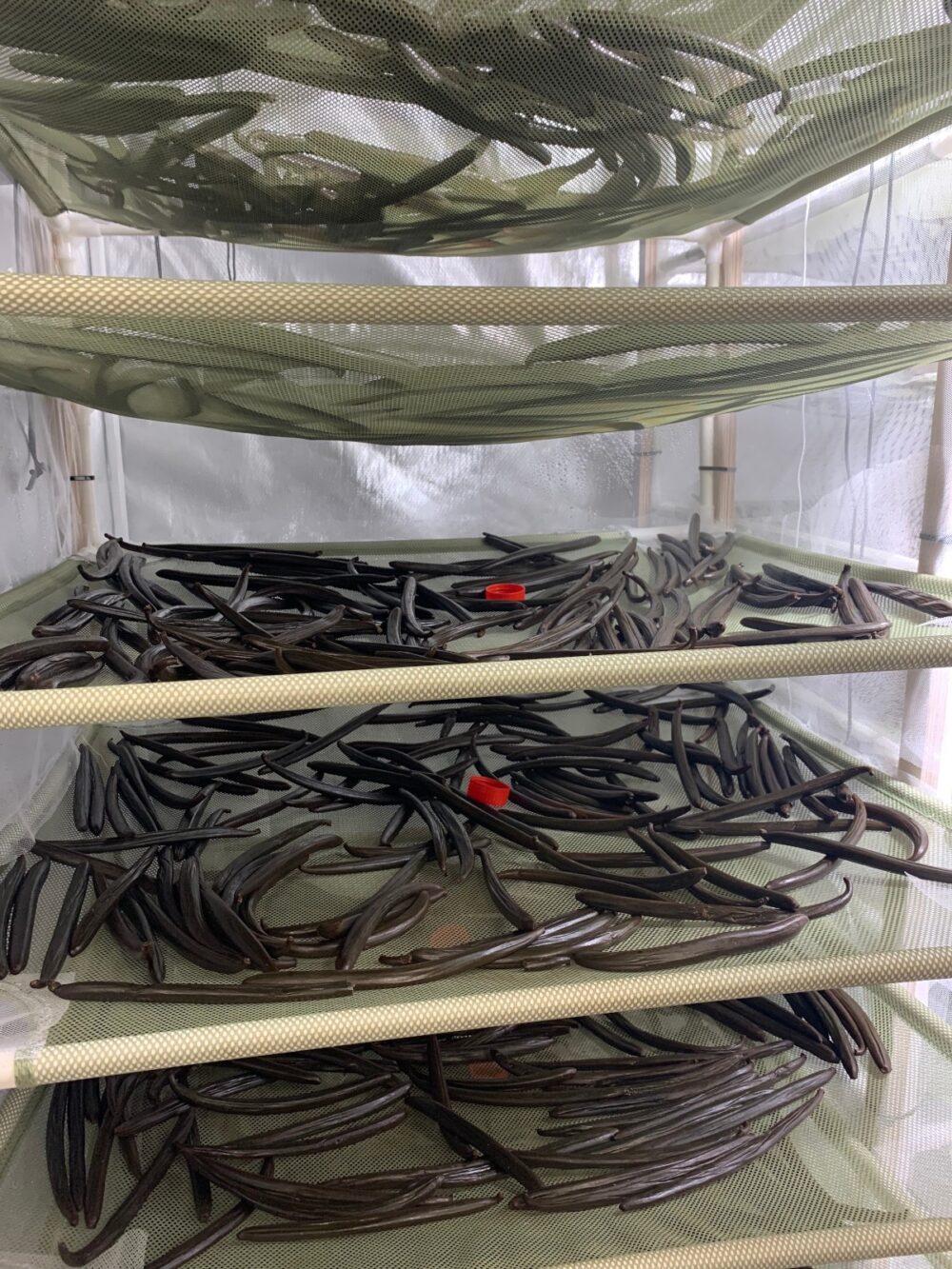 Trays of beans cure under carefully controlled humidity and temperature at the Vanilla Vida beta facility in Ashdod. Photo by Bar Cohen

By shoring up supply, Zilberman hopes to convert about 25% of the current synthetic market to natural.

Its customer base is not Israeli but Belgian, French, German, Spain, Swiss and American B2B flavor houses that specialize in extracting the crop, supporting manufacturer production of commercial items relying on vanilla. Vanilla beans harvested in May 2021. Photo by Bar Cohen

“From the outside, our product looks like Madagascar beans,” Zilberman says. “But inside they contain much more aroma so our customers can buy 20 or 30% less vanilla bean to get the same amount of extract.”

Because vanilla is a natural ingredient, it combines a lot of different aromas. “You have vanillin natural compound together with molecules of caramel and vinegar and chocolate flavor,” Zilberman says.

Without genetic engineering, Vanilla Vida can navigate the bean to “the sensory space to generate more blocks of chocolate vanilla or caramel vanilla flavor — tailor-made to customer need,” Zilberman says.

“When you eat vanilla ice cream, you actually smell it through your mouth and not only through the nose. Our mind converts the smell to taste.” 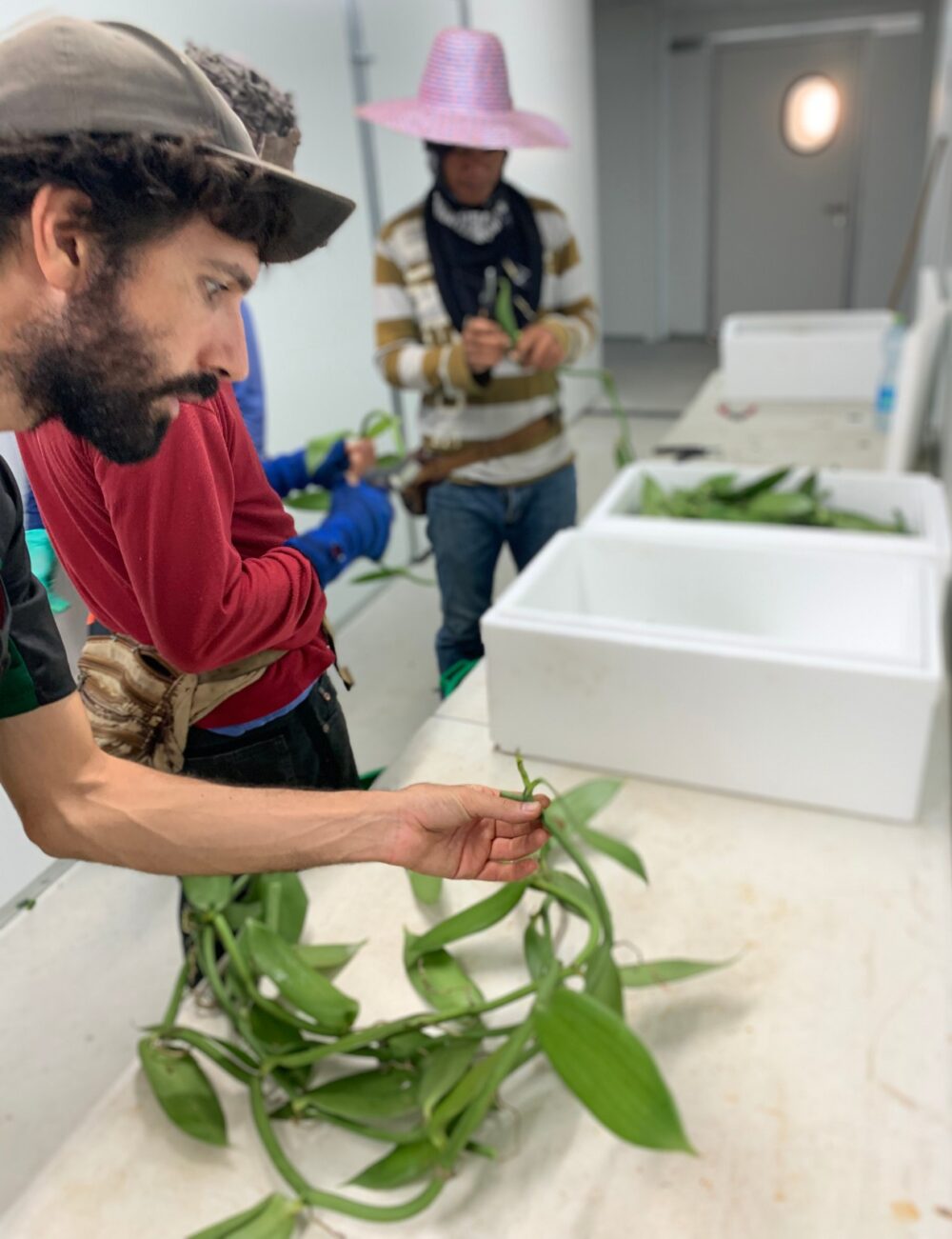 Zilberman, who earned an MBA at Israel’s Open University, grew up in Moshav Tzippori in the Galilee, where his father manages 1,700 acres of cattle, sheep, olives, corn and wheat.

Banking on growing global demand for natural quality ingredients, and protected by patents in the US, Europe and Israel, Zilberman is currently expanding operations by growing beans in Israel.

Vanilla Vida also grows beans in Yesod HaMaala in a climate controlled, pesticide-free greenhouse, which Zilberman describes as one of the world’s largest and most innovative facilities. Production is currently about 50,000 seedlings per year; maximum is double that. 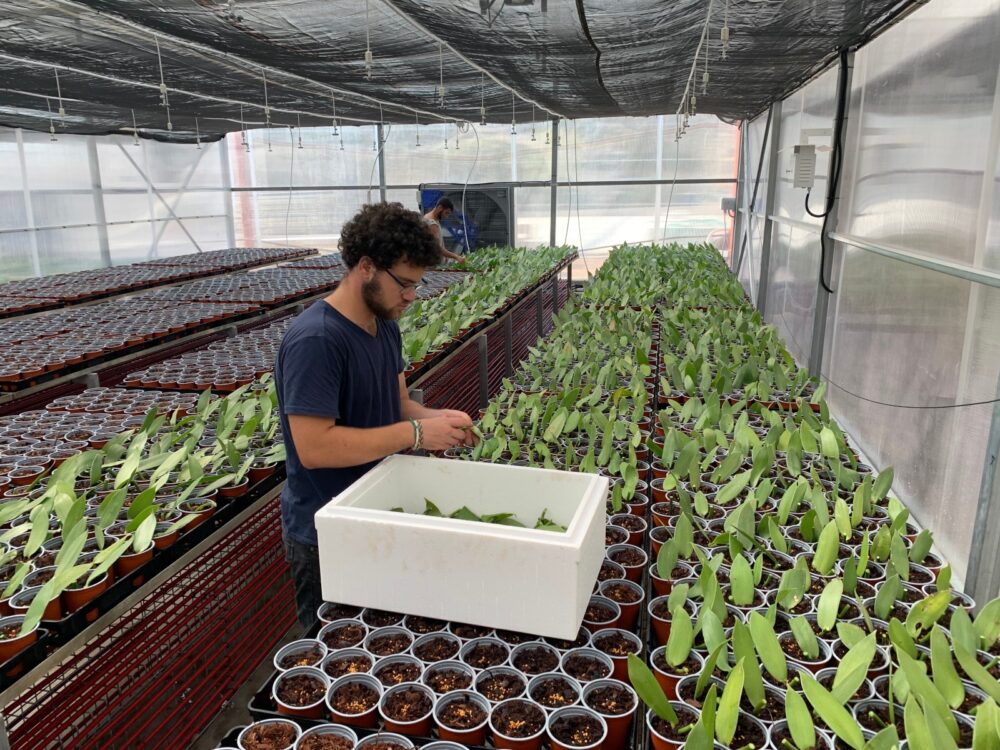 Vanilla Vida also imports unprocessed beans from flat-leaf vanilla planifolia plants from Africa and India and, possibly, in the future from Indonesia, to process at home.

Zilberman devotes two days a week to Vanilla Vida’s R&D operations in Yesod HaMaala and three days to biotech in Ashdod. In early 2022, the Ashdod facility will relocate to the center of Israel, where it will expand to produce 20 times more than its 2021 production levels.

The company is also building more greenhouses on moshavim and kibbutzim, including at one of Israel’s leading kibbutzim, Ma’agen Michael, which is also an investor.

Vanilla Vida launched in late 2019 in collaboration with the Israeli Innovation Authority as part of The Kitchen FoodTech Hub, a seed investor and technology incubator owned by the StraussGroup.

Vanilla Vida employs 12 people and has raised more than $3 million from investors including Peakbridge’s FoodSparks fund and software and angel investor Michael Eisenberg. A Series Around is slated for 2021’s fourth quarter.

“There are other crops that suffer from a broken supply chain and low quality,” Zaidman says. “Vanilla Vida is targeting those as well.”

The company’s plan is not to make a fast exit but to reach toward global operations in the US and the EU.

“Our vision is to make Israel the largest player in the industry and build a new economic engine in agriculture,” Zilberman says.

UNCOVER ISRAEL - Get the ISRAEL21c
Weekly Edition free by email
Sign Up Now!
Bring Israel's story to life.
Millions of people around the world rely on us to gain a deeper understanding of Israel. We are the trusted source for original content you won't find anywhere else.
You can make a difference. Donate today to support journalism that brings Israel’s story alive.
SUPPORT ISRAEL21c
Read more on:   Environment, Technology, Vanilla Vida, The Kitchen