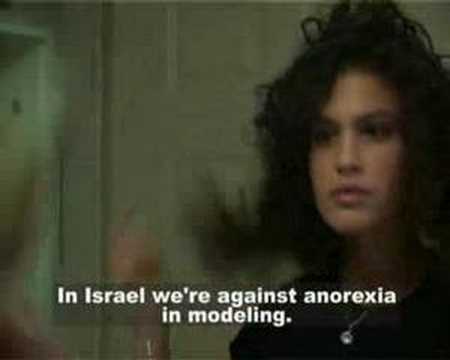 Girls attending recent auditions for Elite International in Tel Aviv were told that the modeling agency is now commited to employing models with a healthier BMIIf Israeli fashion photographer Adi Barkan has anything to say about it, Israel will soon be as famous in the international modeling world for its revolutionary commitment to health as it is for its up and coming models, Bar Refaeli and Esti Ginzburg.

Barkan, the renowned owner of a Tel Aviv modeling agency, has spent the last few years bringing the problem of eating disorders in the modeling community to light. While international demand for Israeli models has increased, so too has his awareness of anorexia among young girls in Israel and around the world. Just a few months ago he rushed 33-year-old Israeli model Hila Elmalich, who was suffering from anorexia, to hospital after he found her collapsed unconscious on the floor of her home. Elmalich, who worked with the Israeli branch of modeling agency Elite International, died last week, weighing under 60 pounds.

Barkan’s goal, through legislation and public relations, is to try to change the very definition of beauty, one pound at a time. In 2004, working with Knesset member Inbal Gavriely, he successfully submitted legislation to Israel’s Parliament requiring all Israeli modeling agencies to use the Body Mass Index (BMI) as a pre-requisite for employment (BMI is defined as an individual’s weight divided by the square of their height).

At a recent audition in Tel Aviv organized by the Israeli branch of the Elite International agency, which in the wake of Elmalich’s death committed itself to employing models with a healthier BMI, Barkan spread his message to members of the modeling community and media. “When the day comes that a talent agent tells a girl, ‘you’re too skinny’, we’ll have made a change,” Barkan said. “But no one ever says this. It starts with ‘you just need to lose five pounds’ and then it doesn’t stop.”

It may be about to stop. Barkan’s campaign is gaining steam, with over 30 Israeli CEOs having agreed to hire models for their advertisements only after they pass a health exam. In order to maintain their certification to work, models will have to be screened every three months, reaching a minimum level of health. With countries such as France and Italy throwing their support behind this campaign, Barkan hopes his crusade will change how young girls look at themselves.

Dr. Richard Even, an Israeli nutritionist, conducted exams at the audition and advised models how to maintain a certain level of health. According to Even, “there’s a new sheriff in town and his name is Adi Barkan.” Speaking about the teens present, Even emphatically added “if you don’t take care of yourself, you won’t be accepted.”

The campaign for a healthier community is far from a one-man effort. Many have backed Barkan including an organization called the Israeli Center of Changing Eating Habits. While Even and others focus on treatment and testing, this center is tackling perception and mental health through outreach. One such effort took place on the Tel Aviv beach last summer: a fashion show highlighted healthy models who passed the minimum standards of Barkan’s tests, and passersby learned about healthy eating from experts. By changing how young people view beauty, the hope is to reduce eating disorders not only among aspiring models, but also among young girls in Israel and around the world.

In addition to sending out a message of health, the recent audition also served as a reminder that Israel is a hotbed of more than just politics. One of the biggest modeling agencies in the world, Elite International sent international director of scouting Michaela Goddard to Tel Aviv to recruit the next generation of Refaelis and Ginzburgs. Aspiring stars, some as young as 15, sat with Goddard and representatives of the international and local branches of Elite to sell themselves as more than just beautiful faces.

So what is it about Israelis that lures talent scouts from fashion capitals like Milan and Paris? “They have very strong characters,” explains Goddard, “maybe because of what they’ve been through living here. Personality is half the battle in this industry; it comes through in photos.” The long-time talent expert echoes what many have claimed about Israel’s deep pool of “talent”: it’s in the mixing.

A melting pot of immigrants from all over the world, Israel boasts an exotic blend of blondes, brunettes, and citizens of all shades and colors. The mass arrivals of Ethiopians and Russians since the 1980s has only increased the diversity of its populace. With nearly every look imaginable, Israel’s modeling industry can meet the needs of almost any talent agent; thus, an increase in demand from Elite and other international agencies.

Witness current stars Bar Refaeli and Esti Ginzburg. Refaeli, barely old enough to purchase alcohol in America, has already graced the cover of the fabled Sports Illustrated swimsuit issue. Ginzburg, not even old enough to vote in the States, has nevertheless appeared on the cover of the French Elle magazine and is already working throughout Europe and New York.

It appears that the sky may be the limit for young Israeli models, at least the ones deemed to be of adequate health. “We’re not just agents; we’re parents and psychologists,” said Goddard. “It’s not just our job to introduce these girls to industry. We need to guide them through it and agents need to take a stand and say no.”

With Barkan leading the way to say no, teenage girls and all of society will be the winners. And that is a real thing of beauty.