It was on a safari through South Africa in 2012 when Elisa and Dr. Morris Hartstein’s four children, all under the age of 12, had what the family now refers to as their “eureka” moment.

As they drove past the shantytowns near Cape Town, the children were so shocked by the poverty that they asked their parents if they could return to Africa and do something to help.

Hartstein, 58, director of Ophthalmic Plastic and Reconstructive Surgery at Shamir Medical Center in Israel, recounted how he and his wife searched for volunteer programs but couldn’t find anything suitable for families with young children.

But he kept asking around, and eventually the Hartsteins headed over to help the Jewish community in Ethiopia.

“At first, we didn’t even know there were Jews still living there,” Hartstein said.

“It’s amazing when people who were in the dark suddenly can see again.”

Elisa Hartstein, 54, said the first time she and her family walked into the Jewish compound, with a synagogue and a school, they were shocked to see “hundreds and hundreds of boys wearing yarmulkes and girls studying and learning Hebrew.”

“On our very first trip in 2014, we did not bring any medical or eyecare equipment,” she explained. “We had planned to run activities with the kids in the Jewish compound and did not expect to do any medical work.”

On their second trip, they brought eye medications and reading glasses.

“We purchased the eyeglasses ourselves,” she said. “At the time, the chain Cofix was selling reading glasses for five shekels, and one of our kids would go there every few days and clear out their stock. We purchased some of the eyedrops and medications ourselves, and Morris received others from drug companies.” 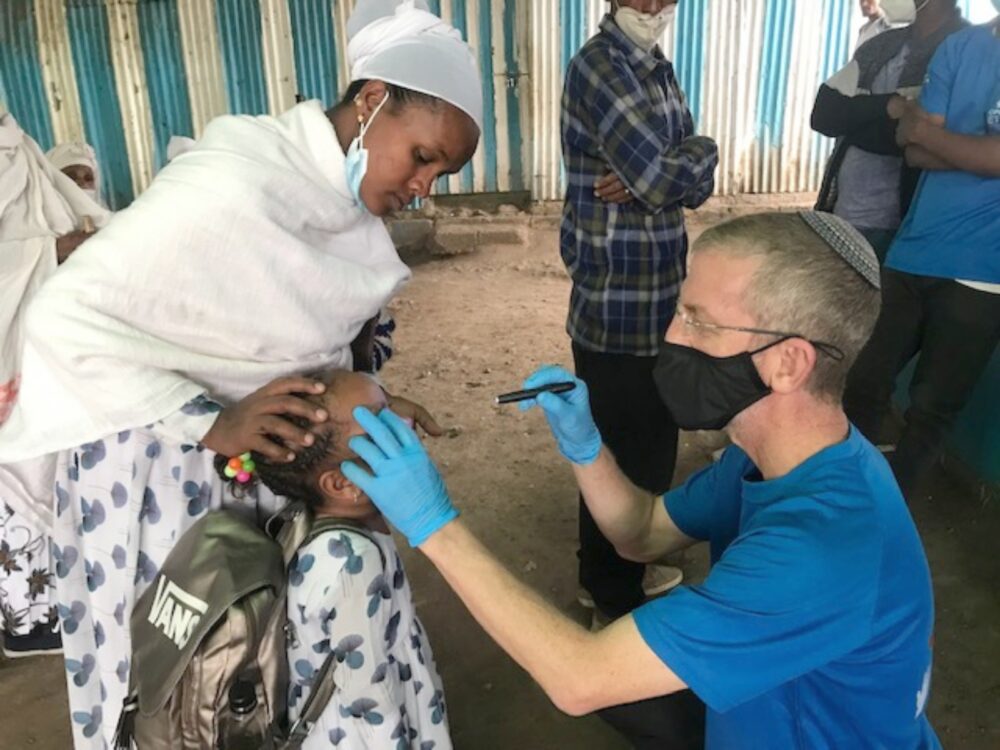 In the past nine years, he has examined more than 7,000 people and helped 17 Ethiopian doctors and fellows receive training at Shamir Medical Center.

“Most of the people I met then and until today, have never been to a doctor,” Hartstein said. He has become the de facto eyecare provider for approximately 8,000 Jews in Addis Ababa and Gondar who are waiting to move to Israel.

Waiting to come to Israel

The Ethiopian civil war has had a terrible impact on the Jews, Hartstein said. There is blatant anti-Semitism that’s only getting worse.

“Many of the Jews have become refugees within Ethiopia, caught in the middle of the fighting. They are in grave danger,” he said.

Many Jews sold whatever they had and moved to Gondar, in northern Ethiopia, hoping to get to Israel. Hartstein compared this to “going to an airport and waiting for an airplane that doesn’t show up.” Some people have waited for 20 years.

“It pains me to see some of the teenagers I’ve come to know there and how they’re wasting the best years of their life,” he said. “People there are waiting in poverty and desperation.”

He goes to Ethiopia as often as he can, sometimes with other doctors and with volunteers he trains, including newly discharged soldiers, friends or other lay people. He taught his wife and children how to use an eye chart so they could pitch in too. 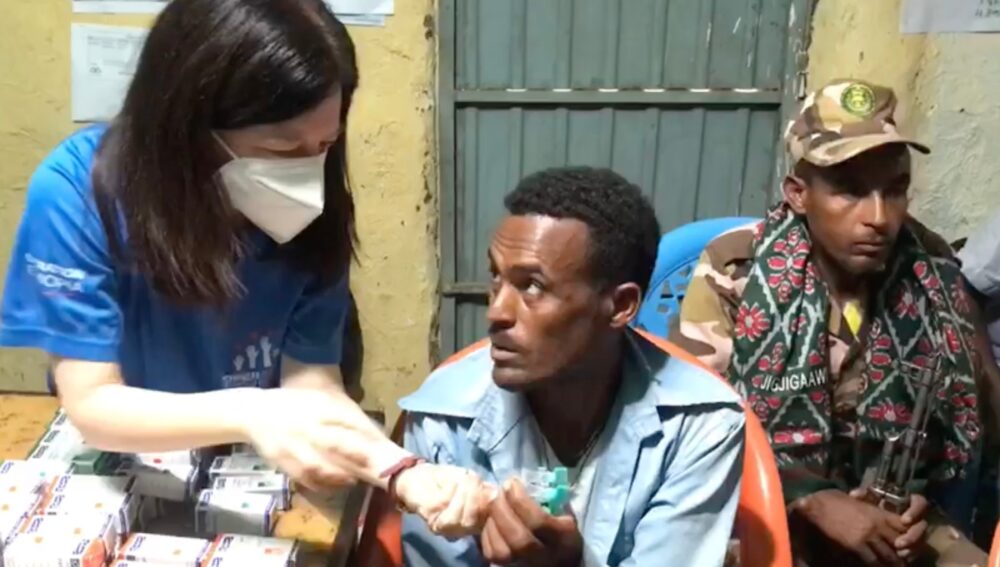 Elisa Hartstein volunteering in the village of Azzezo. Photo courtesy of Operation Ethiopia

Because hospitals in Ethiopia have “absolutely no supplies, not even Band-Aids or other basic medical necessities,” the Hartsteins brought 12 huge bags of supplies along with 50 kilos of food on their last trip.

“The level of malnutrition is astounding,” the physician said. “There at least 500 severely malnourished children there.” A local program has been started to feed children under the age of five. 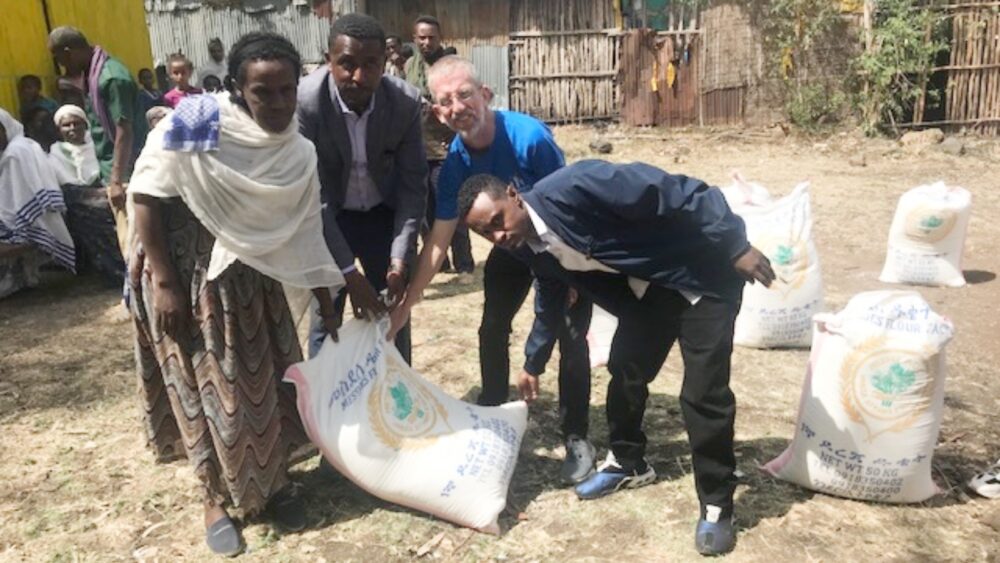 Hartstein, who moved from St. Louis, Missouri, to Israel in 2004, also does cataract surgeries there because untreated cataracts are the leading cause of blindness in Ethiopia, Hartman said.

His “Cataract Campaigns” are sponsored in part by the DEAR Foundation and the Struggle to Save Ethiopian Jewry. Working out of a mobile care unit, he has restored sight to hundreds of Ethiopians.

“It’s very amazing when people who were in the dark suddenly can see again,” he said.

They kissed the ground

In August 2020, Hartstein spoke in the Knesset about the dire conditions in Ethiopia. A few months later, he flew there with government officials including Immigrant Absorption Minister Pnina Tamano-Shata, herself an Ethiopian immigrant.

On that trip, Hartstein returned to Israel with 300 new immigrants whom he knew from his previous trips. Even though the plane left at 2am, Hartstein said he was so excited that he couldn’t sleep. He walked up and down the aisles talking to people.

When they arrived in Israel, there was a band playing and many of the travelers kissed the ground.

“It was one of the most profound experiences of my life,” Hartstein said.

Tamano-Shata said Hartstein’s work with Ethiopian Jews “warms my heart,” and is “a badge of honor for the Jewish nation.”

Somehow, Hartstein – whose father was also an eye doctor – finds time to go running three times a week, even when he’s in Gondar.

The altitude in Ethiopia is 2,000 meters, he said, so “at first it was hard for me to catch my breath.”

One time, he joined a group of Ethiopian runners and kept up with them for several kilometers. “Then they told me their warm-up was over and sprinted away from me so quickly I could hardly see them,” he said with a laugh.

Elisa Hartstein, who grew up in Atlanta, met her husband in New York City, where they were both working. A graduate of Columbia Business School, she founded a clothing company for nursing mothers after her first child was born more than 20 years ago.

Today, she is using her business and entrepreneurial skills to broaden Operation Ethiopia’s reach. She wants to expand its medical work and volunteer base and increase the number and age limit of children in the nutrition program.

Although the Hartsteins always take precautions because of the ongoing war and even canceled two trips due to the danger, they are determined to continue Operation Ethiopia.

“You can’t be on the ground there and see the level of need and not be changed by it,” Elisa Hartstein said. “Each time I go, I still feel like I need to bear witness. After we see what we do, we can’t not do anything.” 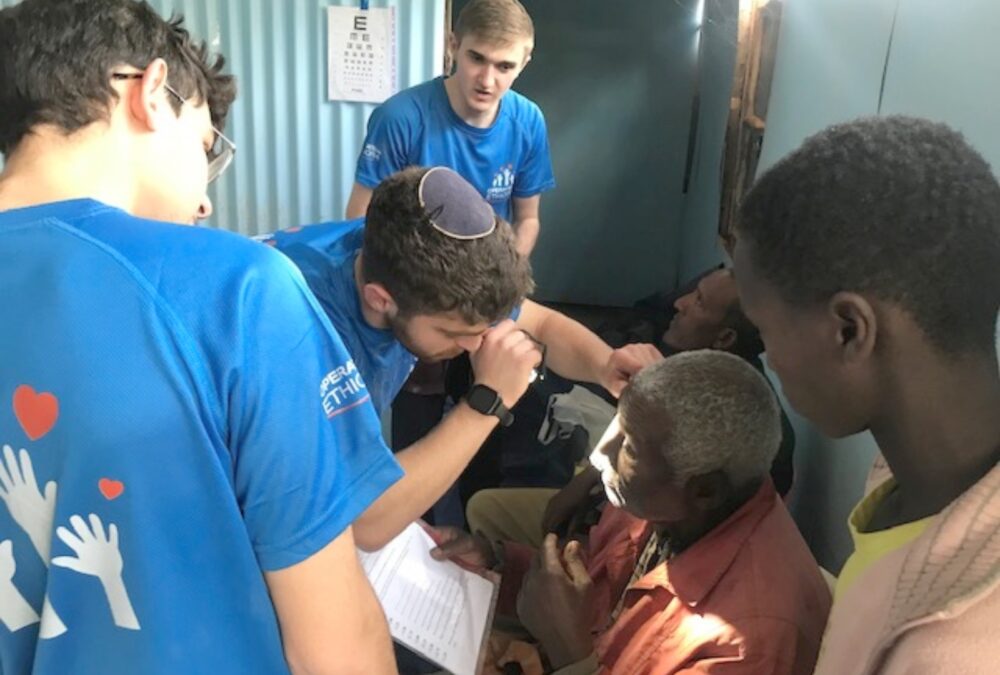 “There’s such a need to an unbelievable degree,” her husband agreed. “This is tikkun olam, it’s healing a fractured world. It’s just an incredible feeling and makes you want to do more and more.”

Further information can be found here.

UNCOVER ISRAEL - Get the ISRAEL21c
Weekly Edition free by email
Sign Up Now!
Bring Israel's story to life.
Millions of people around the world rely on us to gain a deeper understanding of Israel. We are the trusted source for original content you won't find anywhere else.
You can make a difference. Donate today to support journalism that brings Israel’s story alive.
SUPPORT ISRAEL21c
Read more on:   Social Action, Health, Eye health, Ethiopia, Humanitarian Aid, Operation Ethiopia,