Make no bones about this technology: Bonus Biogroup, a regenerative medicine company in Israel, has found a way to grow human bone from a patient’s own fat, culled during liposuction.

Following successful pre-clinical testing, clinical trials will begin within the next year in Europe or in Israel on applications ranging from growing bones for dental surgery to replacing bone tissue lost through trauma or illness.

“The standard of care today is autologous bone grafting — taking bone from other parts of the body, breaking it and putting it in where needed,” Bonus founder and CEO Shai Meretzki tells ISRAEL21c. “Two operations are needed for the treatment of harvesting bone from another part of the body,” he says. Obviously, this solution isn’t optimal.

“Our advantage is that the healing process is much faster, and patients of course don’t have to suffer the harvesting procedure,” he adds.

The new innovation pioneered by Bonus evolved from years of research and development at the NASDAQ-traded company Pluristem Therapeutics, which Meretzki founded previously. The technology involves extracting stem cells from a person’s own fat tissues, and transferring them to a special matrix that coaxes the cells to grow into real human bone.

Building bone in a bioreactor

Using a 3D imaging scan of the area of missing or damaged bone, the Bonus methodology builds a “scaffold” of the correct shape. Then, a live culture of cells is introduced onto the scaffold inside a unique bioreactor that mimics the cellular environment of the human body. After a few months, bone in the correct shape and size, compatible with the patient’s own body, is ready and can be sent by courier to wherever it is needed. 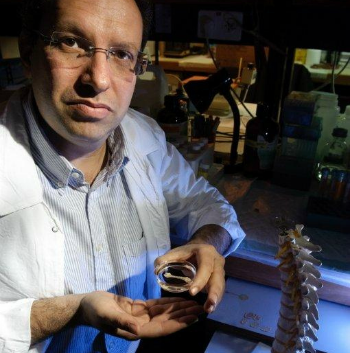 This process allows for growing bone outside the body to be used a few months down the road in bone reconstructive surgery.

While the compelling notion of harvesting stem cells from our youth to grow a complete series of replacement bones and organs for our golden years is “a little farfetched” says Meretzki, he and his team are working on bone reconstructions several centimeters in size for now. Bigger bones like femurs pose a challenge because these bones also include cartilage. But theoretically it can be done, with the right science behind it.

The key is in the growing matrix and medium. Meretzki says: “When you grow cells not in 2D but in 3D, the cells are behaving completely differently. They express different markers and cytokines and react differently with the cells around them.”

Bonus has proven that the technology works in animal models, and expects it will be a success in human clinical trials.

The impact could be enormous. Bone transplantation following hip and knee injuries and fractures amounts to two million bone grafts costing some $15 billion a year. A second application with winning potential is in grafting bone for making dental implants.

Bones that leap over hurdles

Haifa-based Bonus Biogroup, which is looking to expand on its current staff of 12, was founded in 2008 as a publicly traded company on the Tel Aviv Stock Exchange in order to raise sufficient funds for the expensive clinical trials required.

Meretzki hopes to fast track through these trials in about three years versus the typical 10 in drug development and other related medical areas.

“The regulatory processes for bone transplants are much easier than if we were using allogeneic bones [bones from a source other than the patient]. The cells come from the patient,” stresses Meretzki.

When the technology is made available, perhaps four years down the line, a bone graft is expected to cost several thousand dollars, most of which should be covered by healthcare insurance.

With decades of research under his belt, Meretzki says he is indebted to contributions in the field from leading Israeli research centers such as the Technion Institute of Technology and the Weizmann Institute of Science, as well as biomedical researchers around the world.