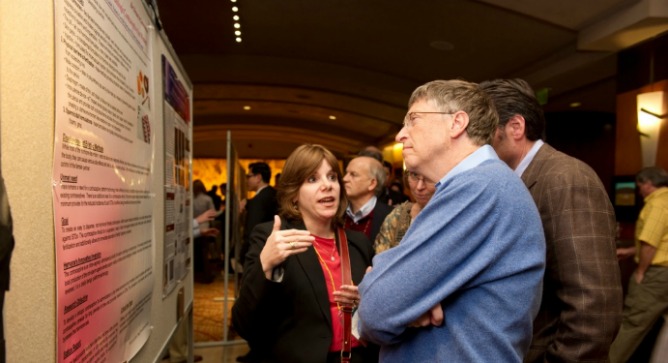 The Israeli company behind a new contraceptive won a $1 million grant from the Bill & Melinda Gates Foundation to develop and test its formulation for a safer, long-acting, non-invasive contraceptive solution, and also won second place in a startup competition at the Israel Life Sciences Biomed Conference in Tel Aviv last May.

The Gates Foundation is most interested in the product’s potential to provide a more accessible, cheaper and socially acceptable family planning option in developing countries, though it would be marketed in the United States and Europe as well.

The LJ-102 suppository by Hervana (“Her nirvana in contraception”) is meant to be a game-changer, says Hervana CEO and founder Rachel Teitelbaum.

LJ-102 puts the equivalent of cement shoes on sperm. It will only have to be applied once or twice a month via a non-hormonal vaginal suppository – as opposed to the widely used birth-control pill, which must be taken daily and contains hormones that carry health risks.

“Safety, convenience and compliance are vital pieces of the puzzle,” explains Hervana COO David Zakai, noting that LJ-102 “is expected to be safer than what is presently available, non-invasive, long-acting and promotes resistance to STD infection as well. That is what Hervana’s breakthrough is about.”

Teitelbaum tells ISRAEL21c that the market needs a contraceptive free of health risks and medical procedures. In some parts of the world where women are solely responsible for family planning, there are simply no viable options.

“There are over 220 million women, according to World Health Organization reports, who don’t have access to an effective method of contraception,” says Teitelbaum, “and 50 million abortions per year in the developing world, which are likely to be a product of the lack of contraceptive availability. They need something that is going to be accessible, low-cost, convenient and non-invasive. That is one of the reasons why the Gates Foundation was excited about this application for the developing world.”

According to the foundation’s website, “One of the most cost-effective public health interventions is family planning, which can significantly improve the health of women and their families. Family planning enables women and couples to determine the timing and spacing of their children and gives mothers and newborns an opportunity to stay healthy.”

The 25-month grant will allow the Beit Shemesh-based company to optimize the formulation of the product and expand its current small-animal testing to larger animals. Zakai estimates another 18 months of development and optimization until human trials can begin.

Teitelbaum earned her doctorate in microbiology and immunology at New York’s Albert Einstein College of Medicine and moved to Israel in 1999. While working in vaccine development, she learned about sperm-fighting antibodies found in infertile women’s reproductive tracts, and that led her to arrive at the idea to develop a new platform for contraception.

Teitelbaum founded Hervana in 2008 to develop this platform, which prior to the Gates grant was only privately funded. She is also a registered patent agent.

In LJ-102, the antibody fragments are produced by lactobacilli, a normal resident of the female reproductive tract that promotes vaginal health. “It occurred to me if we could take the woman out of the equation and still get the antibodies from an outside source, that can be switched on or off, that would be ideal,” she says.

“Some groups are looking into lactobacilli for HIV, but I was the first to consider using this platform as a contraceptive.”

Unlike hormonally based contraceptives that alter the menstrual cycle, or physical barriers to fertilization or implantation such as the IUD and diaphragm, LJ-102 could be used discreetly. That’s important to many women in countries whose cultures frown on birth control. Equally important, under those circumstances, is the product’s ability to protect them from sexually transmitted infections.

The three-person company outsources its lab work to several service providers in Israel, including the Hebrew University, and is pursuing collaboration and partnerships with the encouragement and assistance of the Gates Foundation, says Zakai.

UNCOVER ISRAEL - Get the ISRAEL21c
Weekly Edition free by email
Sign Up Now!
Bring Israel's story to life.
Millions of people around the world rely on us to gain a deeper understanding of Israel. We are the trusted source for original content you won't find anywhere else.
You can make a difference. Donate today to support journalism that brings Israel’s story alive.
SUPPORT ISRAEL21c
Read more on:   Health, Living, Hervana, Rachel Teitelbaum, Bill & Melinda Gates Foundation