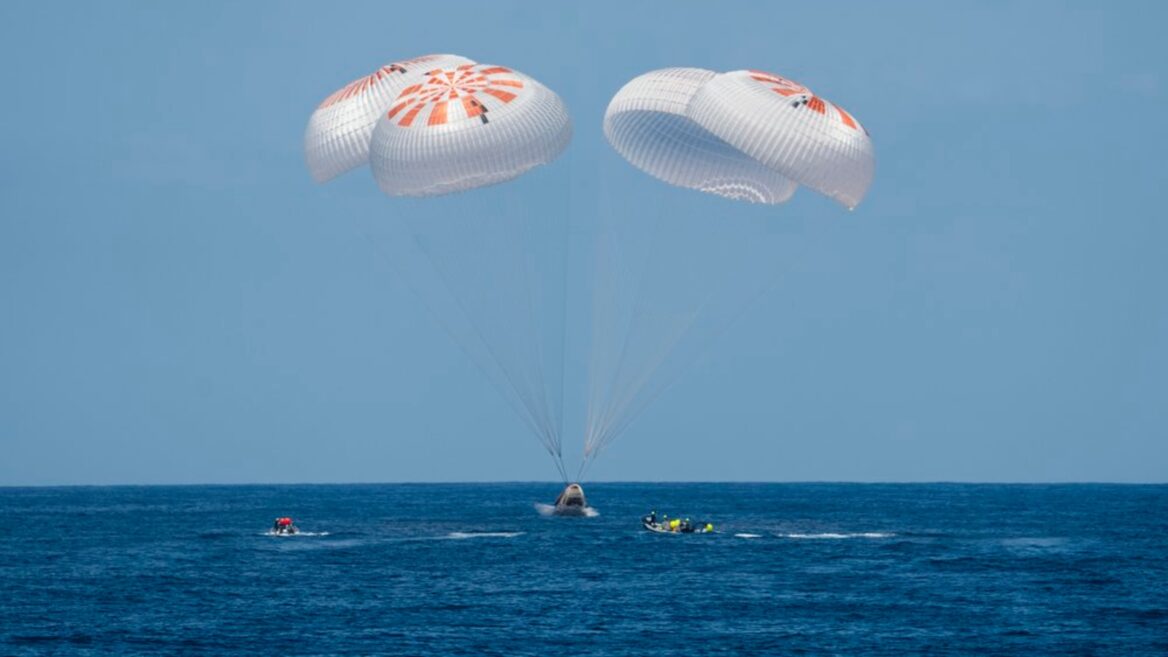 Israeli impact investor and philanthropist Eytan Stibbe and three other Axiom Mission 1 (Ax-1) crewmembers splashed down off the coast of Florida at 1:06 p.m. Eastern Time on April 25, safely concluding the first private mission to the International Space Station (ISS).

#Ax1: The First All-Private Crew to the @Space_Station pic.twitter.com/Ud4E81YePy

They flew approximately 6.3 million miles (about 240 orbits of Earth) and participated in over 30 STEAM (science, technology, engineering, art and math) engagements with Planet Earth in various languages. Stibbe read stories in Hebrew to Israeli children from the ISS live, with an introduction in Arabic to accompany a prerecorded Arabic version.

I am so excited to see it happening for the FIRST time ever, storytime in Hebrew from space, we all sat to watch Eytan Stibbe read “What a beautiful world” by Paul Kor#Rakia #IsraeliSpace #EytanStibbe #Ax1 #storytime pic.twitter.com/Xgou8HpByt

In keeping with the mission’s emphasis on scientific discovery, the returning astronauts are being examined at NASA’s Translational Research Institute for Space Health to gauge the effects of microgravity and spaceflight on the human body, including changes in vision, balance, and perception.

Ax-1 supported 26 science payloads and technology demonstrations that had been curated with leading academic and research partners around the globe, including the Mayo Clinic, Montreal Children’s Hospital, Cleveland Clinic, and Israel’s Ramon Foundation, as well as research investigations from Axiom’s partners such as studying self-assembling technology for future space habitats, devices to purify air on space stations, and more.

Stibbe said he was honored to have led the Rakia Mission on behalf of the Ramon Foundation and the Israel Space Agency in the Ministry of Innovation Science and Technology.

“The underlying goal of Rakia is to recognize the prospective benefits of space exploration. Through it, we all aspired to draw on the curiosity associated with human space travel and unleash its creative potential,” Stibbe said.

“It aspires to raise awareness of the importance of preserving Earth’s limited resources and fostering commitment to international collaborations and the advancement of space research,” Stibbe continued.

“During the mission, dozens of scientific experiments which were developed by Israeli researchers and scientists were conducted onboard the space station, and students, educators, researchers, intellectuals and the general public were stimulated by the exposure to it, and to the demonstration of the use of Israeli technology,” said Stibbe, who conducted a Passover Seder aboard the ISS with plenty of matzah and gefilte fish.

“On the educational level, Rakia enabled live transmission of educational content to hundreds of thousands of Israeli students in Hebrew, for the very first time from the ISS. In addition, Rakia presented a unique opportunity to see Israeli art projects being formed and exhibited in space,” Stibbe concluded.

The experiments carried aboard by Stibbe ranged from how to grow chickpeas in space to how to optimize fast-charging batteries.

Six experiments in the health field were packed into a miniature lab by researchers from Israel’s largest hospital, Sheba Medical Center, seeking data on the impact of zero gravity on human physiology.

Stibbe has a personal connection to Sheba: His daughter, Dr. Shir Stibbe, is a physician in Sheba’s Children’s Hospital and she was prepared to be his backup for the flight if he had been unable to make it.

Researchers from Sheba and from Rabin Medical Center in Petah Tikva collaborated with colleagues at the University of Central Florida College of Medicine to devise experiments measuring the effects of space travel on the human brain and eyes.

One of these experiments is aimed at gaining a better understanding of spaceflight-associated neuro-ocular syndrome (SANS), which causes swelling of the optic nerves, changes the internal eye structures and decreases vision.

The astronauts’ eyes were examined before the flight and are now being reexamined using advanced technology that shows eye structures in high resolution.

“We are conducting a new modality that is able to see the vasculature, the blood vessels of the eyes,” said Israeli ophthalmology resident Dr. Gal Antman. “It’s new and it has not been conducted on astronauts until this day.”

Another group of Sheba and UCF researchers are looking at the possibility of administering medication through enlarged pores in the protective brain barrier – the parenchyma — that are caused by microgravity.

“Neurodegenerative disorders such as Alzheimer’s disease or other dementia are a major problem in the modern world,” said Dr. Harel Baris from Sheba. “The inability to transfer therapeutic agents into the brain parenchyma is a major challenge that we all are facing.”

Here is a clip of Stibbe performing a test on behalf of Israeli startup brain.space, whose EEG-enabled headset recorded his neurological activity during the mission, enabling scientists to track day-to-day brain changes during space travel for the first time.

We are excited to share a video of AX-1 astronaut Eytan Stibbe performing https://t.co/GnebaEOa6t‘s neurowellness experiment in the International Space Station! pic.twitter.com/qCy6lKtIcd

Ax-1 is expected to be the first of four private human spaceflights that Axiom Space has contracted with SpaceX to transport the crew to and from the orbiting laboratory.

UNCOVER ISRAEL - Get the ISRAEL21c
Weekly Edition free by email
Sign Up Now!
Bring Israel's story to life.
Millions of people around the world rely on us to gain a deeper understanding of Israel. We are the trusted source for original content you won't find anywhere else.
You can make a difference. Donate today to support journalism that brings Israel’s story alive.
SUPPORT ISRAEL21c
Read more on:   Technology, Space, Eytan Stibbe