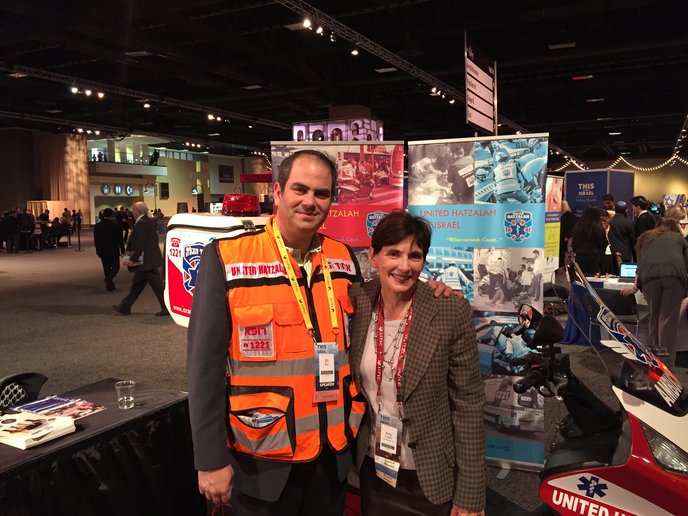 The first three days of March brought 16,000 people to Washington, DC, for the AIPAC Policy Conference, the largest gathering of America’s pro-Israel community.

Participants in this annual event always say that one of the highlights is the showcase of groundbreaking Israeli innovations – the kinds of innovations ISRAEL21c brings to readers every day.

One of the most emotional moments was when past Innovation Showcase presenter Elie Isaacson, co-founder of Agilite portable rescue equipment used across the world, shared a touching story at the 2015 conference.

The former paratrooper explained how Agilite’s Injured Personnel Carrier (IPC), initially developed for soldiers to carry injured comrades on their backs while leaving their hands free, is used by the Jennings family of New York for their son Kieran, who has cerebral palsy.

The audience saw how the lightweight IPC enables them to indulge Kieran’s passion for hiking. The 12-year-old was even able to participate with his family in his hometown’s annual adventure race, carried on his dad’s back in an IPC.

The people behind the innovations

The 2015 Innovation Showcase focused on the people behind the chosen five innovations. These remarkable individuals were pleased to be reacquainted with ISRAEL21c, as President Amy Friedkin and Social Media Director Nathan Miller were on the scene to congratulate them.

First up was Ami Daniel of Windward, whose story ISRAEL21c featured on December 3, 2014. Daniel established a Jewish-Arab community center when he was only 16, and later became an Israeli naval officer.

Daniel and his navy buddy and cofounder, Matan Peled, decided to “do something transformational connecting technology and the high seas.” Windward is a unique business that gathers and analyzes intelligence from ocean vessels to counter widespread transmission of false data.

He told Miller that he was inspired to be among so many Americans “looking for the points of light in Israel’s story.” ISRAEL21c’s coverage of Windward, he added, can help get the message about Israeli innovation even to those who may not consider themselves traditional supporters of Israel.

The second presenter was Rami Parham of MUV Interactive, the subject of an upcoming ISRAEL21c feature. MUV is soon releasing its impressive Bird Bluetooth-connected device packed with sensors to enable interaction with your digital environment through hand motions. Following the Showcase, many AIPAC delegates inquired about buying the system, distributing it and/or investing in the company. 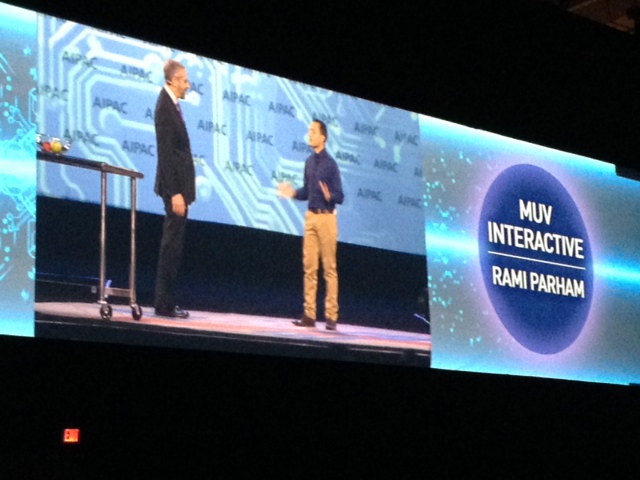 Parham explained that he and his brother came up with the idea while watching a TED Talk presenter use a conventional clicker to advance his slide show. They wanted to devise a more cutting-edge way to interact with content. A month later, he quit his job and founded MUV.

“In a world where Israeli companies and Israelis in general do not get supportive media coverage, bodies like ISRAEL21c are helping to rebalance the system and give Israeli companies the coverage that they deserve,” he told Miller.

ISRAEL21c has written about Beer and the work of his organization, which trains Jews, Muslims, Christians and Bedouins to provide emergency medical assistance within three minutes after notification via a proprietary smartphone app. The volunteer medics respond to some 700 calls daily.

Beer revealed at the conference that United Hatzalah is now training groups in the United States, starting in Jersey City, New Jersey.

When he was six years old, he saw a Jerusalem bus blow up in front of his eyes and heard a man yelling for help. “I was so scared I ran away, but it affected my life. When I was a teenager, I decided I wanted to become a volunteer on an ambulance and save lives,” he related.

However, his work with Israel’s national emergency response organization, Magen David Adom, showed him that ambulances cannot always get to the scene quickly. When he was only 16, he realized the importance of neighborhood-based medics when he saved the life of a man injured in a car crash around the corner – by using his own skullcap as a tourniquet until the ambulance arrived.

Beer reminisced with Miller about the October 2013 visit to United Hatzalah’s Jerusalem headquarters from ISRAEL21c’s Journey to Israel participants. “You reach a lot of amazing people involved in exposing the goodness of Israel,” he said. “We in Israel have so many innovations in lifesaving that people need to know about.”

Another presenter was Dror Sharon of Consumer Physics, whose unique new SCiO pocket molecular scanner was featured by ISRAEL21c earlier this week.

“While the technology at our fingertips is extremely powerful, when it comes to the actual physical stuff around us, you’re totally on your own, and we wanted to solve that problem,” he said.

Onstage at the Innovation Showcase, Sharon used SCiO to analyze two apples, showing one had a higher sugar content. Then he analyzed the composition of two pills containing the same active analgesic ingredient.

“We’re on a mission to build the world’s largest database of fingerprints of our physical world,” said the Technion and MIT graduate. “Israel is uniquely suited to solve these types of multidisciplinary problems because we’re a very small country.”

Yael Vizel of Zeekit talked about amazing advances in fashion technology. Her company — among those featured in ISRAEL21c’s article on this topic on February 9, 2014 – reengineers the online shopping experience with a deep-image processing platform that allows the shopper to “try on” clothing before buying.

Zeekit’s technology, which maps the topography of the human body from a single 2D picture, is based on Vizel’s experience as an electrical engineer at Elbit Systems and as a telecommunications officer in the Israel Air Force. She was the first woman to command the IAF Telecommunication Officers course and its field and aerial telecommunication crews, and is the first female captain in the IAF reserves to have earned commander honors. Recently VIzel was named one of the top three entrepreneurs in Israel.

“I feel that when you know what you do may have a huge impact on your country and the people you love, you’re 100 percent motivated to do big things and take large risks,” she said. 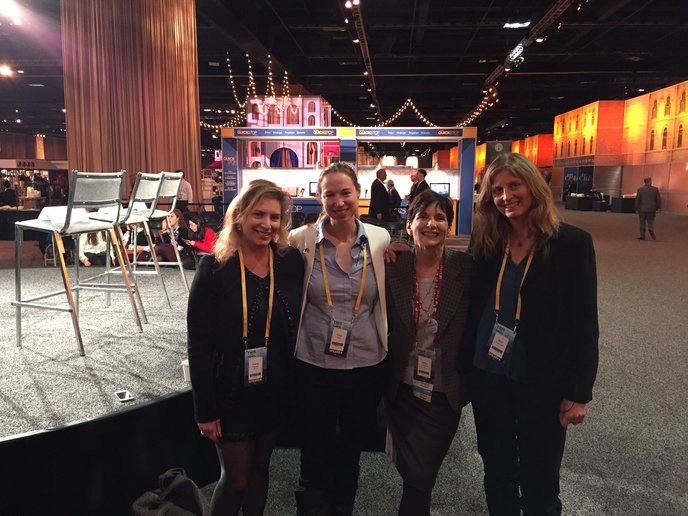 ISRAEL21c participated in the event in several areas. Nathan Miller was part of a panel discussion entitled “Israel Through the Media’s Lens,” and the organization also hosted a joint reception with the iCenter to inform AIPAC delegates about our organization’s work, especially our Digital Engagement Project.

UNCOVER ISRAEL - Get the ISRAEL21c
Weekly Edition free by email
Sign Up Now!
Bring Israel's story to life.
Millions of people around the world rely on us to gain a deeper understanding of Israel. We are the trusted source for original content you won't find anywhere else.
You can make a difference. Donate today to support journalism that brings Israel’s story alive.
SUPPORT ISRAEL21c
Read more on:   United Hatzalah, Zeekit, SCiO, MUV Interactive, Windward, AIPAC, ISRAEL21c Uncovered