Israel is planning to build a model agricultural village in the new nation of South Sudan, aimed at teaching local farmers how Israel’s breakthrough agricultural methods and technologies can help the fledgling African nation survive and thrive.

The idea took shape when Deputy Foreign Minister Danny Ayalon got to talking with South Sudan’s Minister of Agriculture, Betty Ogwaro, at the Agritech 2012 expo in Tel Aviv last May.

“Betty met not only people from our ministry but also our minister of agriculture, and the discussion became very productive,” Israeli Ambassador to South Sudan Haim Koren tells ISRAEL21c. “We suggested to her that we have plenty of experts in agriculture and irrigation who can give a hand, but since she knows better than we do what the needs are, we asked her to prioritize the issues.”

Ogwaro recently told Koren, who travels to the year-old country frequently, that she wants the demonstration farm set up in Eastern Equatoria, one of the 10 states comprising South Sudan.

“The idea is first to help supply vegetables, a very basic food of which there is a shortage so they have to import everything,” says Koren. “They simply need it for their survival.”

The problem is not a lack of arable soil or of water – South Sudan is blessed with an abundance of both thanks to the nearby Nile River and a relatively long rainy season – but a lack of expertise.

“Basically it’s a society of shepherds and cowherds, not farmers,” Koren explains. “They are not qualified to deal with farming.”

As it happens, many Sudanese refugees who sought better lives in Israel over the past few years were placed on kibbutzim where they learned advanced Israeli methods of farming and drip irrigation. Now that many of these refugees are being repatriated to South Sudan, the Foreign Ministry is hoping to integrate them directly into running the new agricultural project.

“We can contribute the technology and enable some [South Sudanese] people to get jobs working on the farm,” says Koren. “It needs a training staff, and we’ll work to prepare the basic program for the project, present it to Betty and let her take it from there. I’m back and forth all the time, following up with relevant ministries and bureaucrats.”

Koren was planning to escort the first group of Israeli experts in September to assess the scope of the project and draw up a budget proposal to present to the Israeli government.”

The ambassador has assigned as project manager Dr. Yossi Baratz from MASHAV, Israel’s international development agency. Baratz, a physician, formerly served as the agency’s representative in Kenya, and in 2010 oversaw the inauguration of an Israeli-built emergency room at Kisumu East District Hospital in that African country. 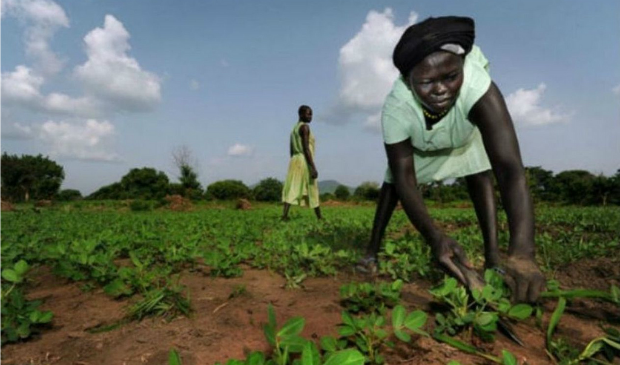 “I would like Israel to translate their skills in small-scale agriculture to Sudan,” Ogwaro told Israel National News at Agritech. “I see them improving agriculture through irrigation … this is very important.”

Koren is hopeful that the farm can be started at the beginning of 2013, and will eventually involve Israeli agricultural experts from the private sector. “The idea is approved and now we need to make it come true,” he says.

The project budget will come entirely from the Israeli government, and is intended as the first of several agricultural projects in South Sudan. The country’s population is about 8.5 million, similar to Israel’s, but spread out over a very large territory.

“We have strong bilateral relations,” says Koren. “It is the youngest country on earth, only one year old, and still coming out of a very difficult situation. We have abilities to help them, so it’s a great opportunity.”

He explains that aid to developing countries “is a very important tool in foreign policy, and part of being a developed country.”

“When Israel was accepted into the OECD [Organization for Economic Cooperation and Development], we committed to international projects, not just aid and assistance but also money,” Koren says. “We are also members of the United Nations and contribute money for all kinds of projects to benefit the international community through the UN. We happen to be experts in some fields and it’s wonderful to be able to contribute to the process of nation-building.”