Israelis across the country came to a two-minute standstill today, to commemorate Holocaust Martyrs and Heroes Remembrance Day (Yom HaShoah), in honor of the six million Jews killed by the Nazis during World War Two.

At 10am, in an annual ritual, sirens blared out across the country, and people everywhere stopped what they were doing, even driving, to stand still and silent.

Holocaust Remembrance Day is the start of a week with three Israeli holidays that progress from commemoration to celebration: Yom HaShoah, Yom HaZikaron – a memorial day for soldiers killed in Israel’s wars – and Yom Ha’atzmaut – Israel’s Independence Day. 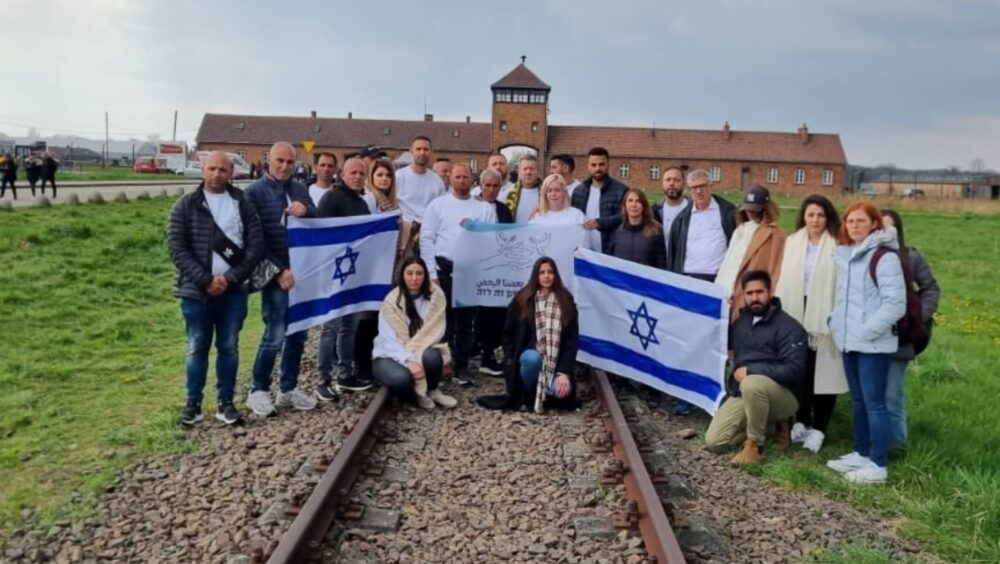 Ahead of Yom HaShoah, an Arab-Israeli delegation paid respects to the six million Jews murdered in the Holocaust with a special ceremony in Arabic at Auschwitz. Photo courtesy of Together Vouch for Each Other

Sirens will sound again next Tuesday evening at 8pm Israel time, as memorial day begins, and again on Wednesday morning at 11am, when Israelis flock to cemeteries to mourn over the graves of thousands of fallen soldiers and terror victims.

At nightfall next Wednesday, the national mood will make an abrupt switch as Israel begins to celebrate 74 years since David Ben-Gurion read aloud the Scroll of Independence on May 14, 1948.

All day Thursday, Yom Ha’atzmaut parades, picnics and partying will round out a highly emotional week on a jubilant note.