Israel Defense Forces Chief of General Staff Benny Gantz confirmed reports Sunday afternoon that the IDF is going to set up a field hospital near the Erez Crossing at 8 p.m. Sunday evening to treat wounded Palestinians.

Coordinator of Government Activities in the Territories Major Yoav Mordechai said that the field hospital will treat mainly women, children and the elderly hurt during the current war in Gaza. In addition, he said in a statement, those whose injuries require additional care can be transferred to Israeli hospitals. 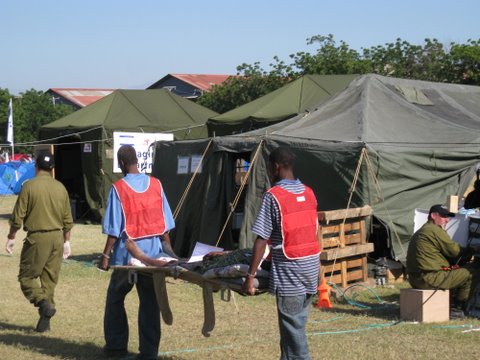 The IDF field hospital in Haiti in 2010.
The announcement coincided with Israel’s allowing the entry into Gaza of a truckload of medical supplies which, according to Palestinian Authority Health Minister Jawad Awwad, had been delayed for two days. It preceded a request from Hamas for a two-hour “humanitarian ceasefire” – a request Israel has granted.

This comes at the heels of a previous, three-hour ceasefire to which Israel consented on July 17. During that halt in Israeli operations, three mortars were fired on Israel from Gaza.

This is not the first time Israel has set up a field hospital at the Erez Crossing. As hostilities between Israel and Gaza drew to a close in January 2009, Israel’s Magen David Adom (MDA) set up a medical center for injured and sick civilians from Gaza in cooperation with the Department of Health.

The medical center was designed to handle 30 patients an hour and offered patients everything from emergency medicine, to surgery and family medicine.

The IDF is considered a specialist at setting up field hospitals in extreme situations. In January 2010, the IDF Medical and Rescue Team set up a field hospital in the Haitian capital of Port-Au-Prince in the wake of a deadly earthquake there.

Israel won widespread praise for the speed at which it began operating the hospital, and at the superior medical facilities it offered there.

The following March the IDF again set up a field hospital in Japan in the wake of the devastating tsunami.