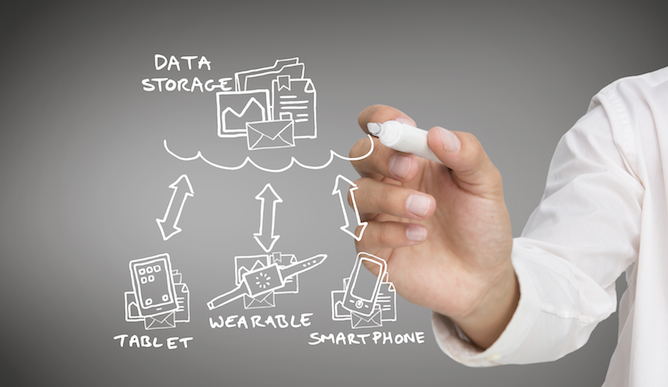 Inside much of wearable technology will be Israeli ingenuity. Photo by www.shutterstock.com

Click here to listen to ISRAEL21c’s Viva Sarah Press speak on TLV1 to Nir Kouris, co-founder of Innovation Israel and one of the organizers of Israel’s first Wearable Tech Conference, and Enon Landenberg, president of Israeli startup Infinity Augmented Reality about Israel’s role in this revolutionary trend.

In the not-too-distant future, we’ll all be wearing the Internet of Things (IoT): sensor-embedded shirts transmitting heart-rate data to our doctor, eyeglasses surfing the Web, bracelets replacing credit cards. Dog collars will tell owners how much Fido ate; diapers will alert parents it’s time for a changing.

And inside much of that wearable technology will be Israeli ingenuity.

“I think a lot of the wearables will come out of Israel,” predicts Robert Scoble, one of America’s most highly regarded “tech evangelists.” He was in Israel in mid-May for a series of events around the inaugural WearableTech Conference in Tel Aviv where participants from several countries explored what Israel can offer this rapidly emerging field.

“Intel is investing in a wearables team here,” Scoble revealed in answer to a question from ISRAEL21c during his presentation at Jerusalem Venture Partners (JVP). “There is imaging expertise in Haifa; GE does a lot of its imaging R&D here. And Israel has a lot of expertise in inkjet printing, so you might think about a printer that can spray transistors onto anything.” 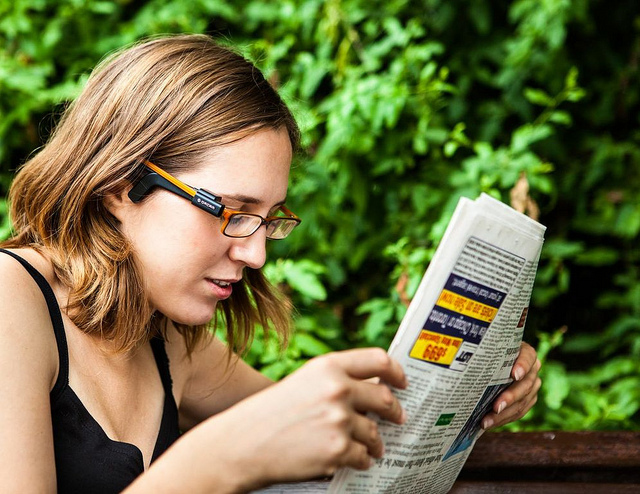 OrCam’s smart glasses are meant to improve daily life for those with visual impairment.

Scoble singled out Omek gesture recognition software (bought by Intel for $40 million) and OrCam smart glasses for people with visual impairment; as well as PrimeSense, the Israeli motion-tracking chip technology for the Xbox 360 that was acquired last November by Apple.

Much of this knowhow comes out of the Israel Defense Forces, said Julien Blin of Gizworld.com, a global mobile/wearable computing consultancy in California. “Those guys coming out of the military really know how to build algorithms and sensors,” Blin remarked.

All of which puts Israel in the right position on the wearable-tech wave.

“This was the year of the wearables,” says Nir Kouris, cofounder of Innovation Israel and one of the organizers of the WearableTech conference. 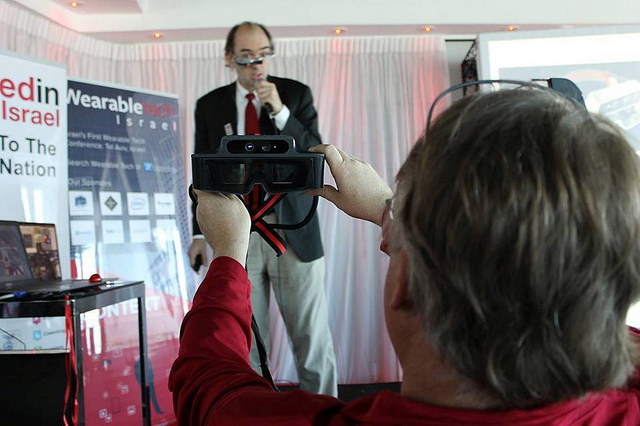 Kouris points out, for example, that Intel invested $100 million in the Basis health-tracker watch. Google is touting its Android Wear software platform, while Apple is betting on the iWatch and Samsung on its Galaxy Gear.

“Everyone wants to be in this space, and Israel has a big role in it, so that’s why all these people came to the WearableTech Conference,” says Kouris, noting that 28 participants flew in from China alone.

“Father of wearable technology” Prof. Steve Mann came from Toronto to give a keynote address and demonstrate the SpaceGlasses mediated reality headset being developed by his company, Meta. 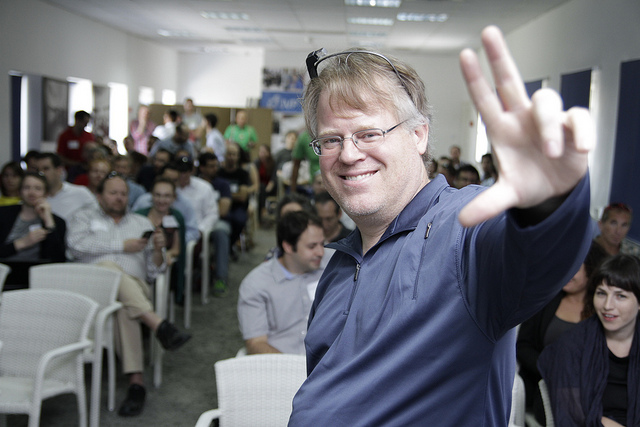 “It was really an international summit, and a lot of deals are coming out of this,” Kouris tells ISRAEL21c.

Among the Israeli startups that presented at the main event in Tel Aviv were MUV Interactive, which makes a flexible finger device to turn any surface into a touchscreen; the Neura predictive and adaptive ecosystem for wearable devices; and the hereO children’s wristwatch incorporating the world’s smallest real-time connected GPS tracking device.

Israel has a strong track record in med-tech, so much of the health-related wearable technology coming onto the market will have Israeli input. 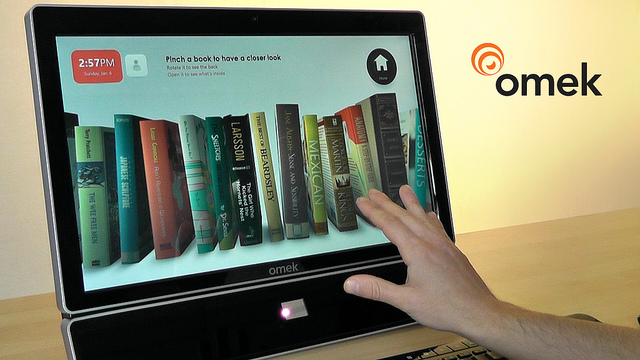 Omek Interactive’s gesture-recognition software will be a big player in wearable tech.

Israel’s first Google Developers Group event was held in Jerusalem a week before the conference. And at the Israel Arts and Science Academy recently, Mooly Eden from Intel Israel predicted the next big thing will be technology that connects directly to your brain, reports Roy Munin, community manager of the MadeInJerusalem project.

“You will think of a question and the information will come up without reaching for your phone and typing. We have the bleeding edge for this technology right in Jerusalem at the Hebrew University,” Munin notes.

Yoni Colb of Quickode said his Jerusalem startup develops apps for PangoUSA and a Brazilian parking-tech company to enable wardens to check if a car’s spot is paid for, and print out tickets via a small wearable device.

The applications of wearables are infinitely broad, says Tuvia Elbaum, cofounder of Jerusalem-based Umoove,  which is pushing the envelope in eye-tracking technology.

“Wearables nowadays are mainly watches or glasses, and glasses are focused on the outside — what the person sees,” Elbaum told ISRAEL21c at the JVP. “The next step will be looking at what the user’s eyes are doing, and combining the two things. That’s where we come in with our eye-tracking technology. We can add more natural interaction with the glasses.” 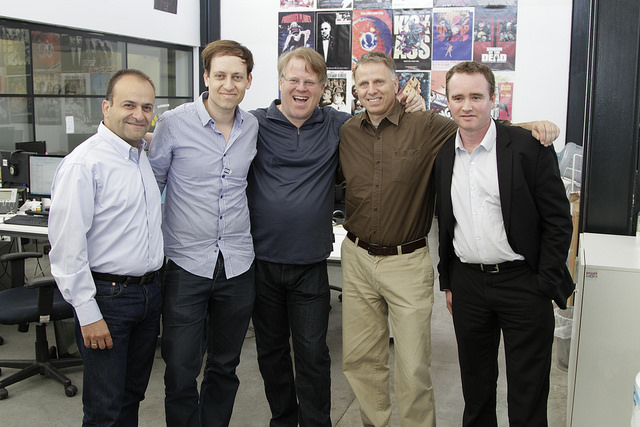 The WearableTech conference was preceded by a hackathon led by Jonathan Schipper of Johnny505 Studios in Israel, which does consulting and development for Android, Glass, wearables and the web. Schipper aims to create the first incubator for wearable apps and devices in collaboration with London’s Nonlinear Labs.

What does the future hold for wearable technology? “We’re going to see highly personalized products,” predicts Scoble, who was wearing a washable shirt with heart-rate and respiration sensors built into the fabric.

UNCOVER ISRAEL - Get the ISRAEL21c
Weekly Edition free by email
Sign Up Now!
Bring Israel's story to life.
Millions of people around the world rely on us to gain a deeper understanding of Israel. We are the trusted source for original content you won't find anywhere else.
You can make a difference. Donate today to support journalism that brings Israel’s story alive.
SUPPORT ISRAEL21c
Read more on:   made in jerusalem, quickcode, OrCam, Oxitone, Umoove, Israeli innovation, Technology, Innovation, Mobile