“On behalf of the government and people of Israel, I send my condolences to the royal family and the people of the United Kingdom on the death of Her Majesty Queen Elizabeth II,” said Prime Minister Yair Lapid. “She leaves behind an unparalleled legacy of leadership and service.”

President Isaac Herzog called the 96-year-old monarch’s passing “the end of an era” and noted that although the world changed dramatically during her 70-year reign, “the Queen remained an icon of stable, responsible leadership, and a beacon of morality, humanity and patriotism.”

Elizabeth ascended the throne after the death of her father, King George VI, four years after the state of Israel won independence from Great Britain in 1948.

She never visited Israel, but on a few occasions she received Herzog’s parents; his father, Chaim, was a two-term Israeli president and represented Israel at the United Nations.

“My late mother and father had several audiences with the Queen over the years. Her fond welcome and warm hospitality left a profound impression down the generations,” said Herzog, who will represent Israel at the funeral on September 19.

Writing in the condolence book for the queen at the residence of the British Ambassador to Israel, Neil Wigan, Herzog added, “May God bless King Charles III and may he reign in peace.” 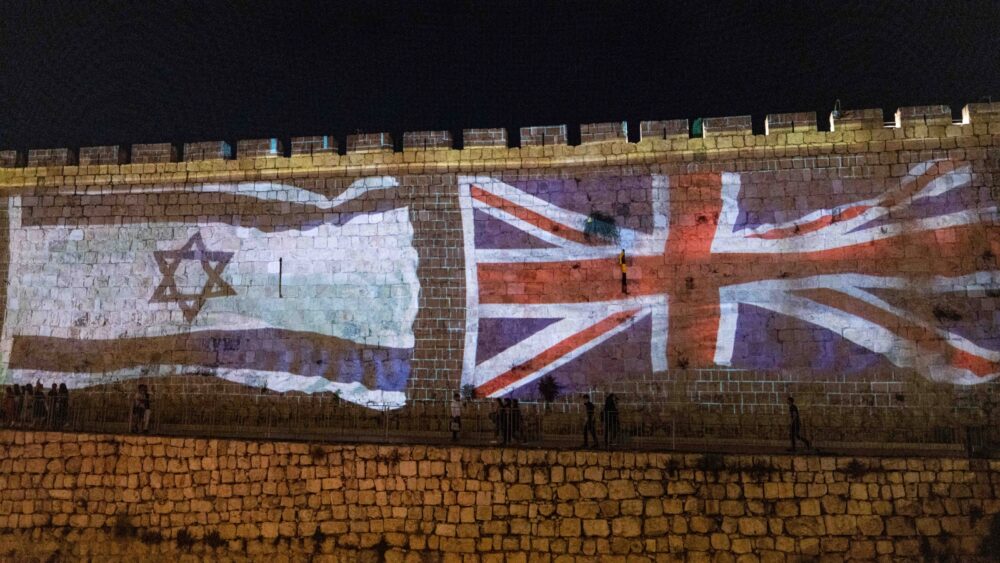 The Union Jack and Israeli flags are screened on the walls of Jerusalem’s Old City following the death of Britain’s Queen Elizabeth, September 8, 2022. Photo by Yonatan Sindel/Flash90

I would like to express my sincere condolences to the United Kingdom, and to the loved ones of Her Majesty Queen Elizabeth II. The Queen served the international community over 70 years, and under her reign, UK-Israel relations flourished. My thoughts are with the UK today.

Tzipi Hotovely, Israel’s ambassador to the UK, tweeted that she was “deeply saddened by the death of HM Queen Elizabeth II. As Britain’s longest reigning monarch she was admired around the world as an inspirational & beloved stateswoman.”

Tonight, Israel stands in solidarity with the people of the United Kingdom & the Commonwealth. We join them in mourning the death of HM Queen Elizabeth II by paying tribute in the Old City of Jerusalem. pic.twitter.com/tiKDX2xURh

Jewish Israelis constitute 6% of the UK’s Jewish population. The estimated number of Jewish Israelis who emigrated from the UK was about 46,000 as of 2015. Nearly 9,200 people are members of the Brits Living in Israel Facebook group.

Charles, then Prince of Wales, made an official visit to Israel in January 2020 to attend the World Holocaust Forum. His son, Prince William, was the first member of the British royal family to visit Israel in an official capacity, arriving in June 2018.