The brown smudges on Sima Amsalem’s forearms exude a chocolaty aroma as she extends a hand of greeting at her Sweet N’ Karem chocolate factory in Jerusalem’s artsy Ein Karem neighborhood.

For a woman whose waking hours are enrobed in chocolate like a fine praline, Amsalem is surprisingly trim. It could be that the demand for her sweets doesn’t leave her much time for munching.

“My customer base is always growing,” she tells ISRAEL21c while piping fillings into pralines for a wedding as a co-worker rolls truffles for guestrooms at a boutique hotel across the lane. “Every time we think we’ve finished all the orders, somebody calls.”

The gourmet chocolate scene in Israel is as hot as the molten brown liquid spinning in Amsalem’s tempering machines. It reportedly accounts for about $5.3 million of the overall $40 million domestic chocolate market. The Jewish high holidays are also high season in chocolate retail sales.

The much-loved confection is not new to the region. Elite, Israel’s leading mass-marketed brand of chocolate, was established in 1933 by three immigrant families and is still going strong after merging with the Strauss Group, Israel’s second largest food and beverage company, in 2004.

Ornat, founded in 1987, was Israel’s first manufacturer of handmade pralines. Today it runs a visitors center and factory store in Gush Tel Mond, and its elaborately packaged, strictly kosher items are sold in many outlets throughout Israel and over the Internet.

But the idea of premium chocolate as an Israeli product entered the global consciousness only in the last decade, with Strauss Group’s 2001 acquisition of Max Brenner “Chocolate by the Bald Man”.

Business partners Max Fichtman and Oded Brenner founded Max Brenner in 1996 with the goal of creating “a new culture of chocolate” in Israel. Inspired by Roald Dahl’s Willy Wonka character, they concocted first-class treats from beans grown in Ecuador, Venezuela, Ghana and Indonesia, with accessories to evince a whole-chocolate environment.

These days, Max Brenner chocolate boutiques and Chocolate Bar eateries dot Israel and Australia, with additional locations in Singapore and the Philippines, Las Vegas, Manhattan, Philadelphia and Boston. Brenner, now on his own, has relocated to New York and the confections are no longer made by hand.

But back at home, the culture he created is going strong. Especially in the larger cities and malls, gourmet chocolate shops have sprung up selling their own and/or other brands of handcrafted goodies. Often, Israeli-made pralines and truffles are distinguished by their Middle Eastern/Asian flavors and fillings such as passion fruit, pistachio, chai masala, jasmine, cardamom and ginger.

For the love of chocolate

Amsalem’s intimate relationship with her chocolate rubs off on her workers and the drop-ins who come just for the chance to package the finished products prettily. “We speak with the chocolate; we tell it how much we love it. It helps!” says Amsalem, who is self-taught.

“It’s all women here,” adds Gil, one of her employees, her palms slick with truffle dough. “We talk about our families and lives while we work.”

Sweet N’ Karem was founded by Amsalem’s husband Ofer about six years ago. Though they’re now divorced, Ofer makes the premium ice cream in the retail chocolate store around the corner while Sima manages the factory.

“We are good friends, because chocolate keeps people together,” smiles Sima, though oddly enough the couple’s eight-year-old son does not care for chocolate.

You’ll hear the same passion in the voice of Galit Alpert, another young mother. Her Galita Chocolate Farm at Kibbutz Degania Bet, near the Sea of Galilee, is based on three years of intensive chocolate- and ice cream-making internships she completed in Belgium. 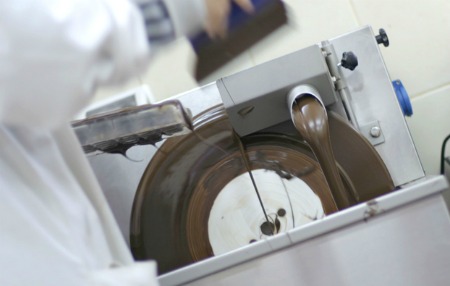 “Twelve years ago, I found myself by accident leaving Israel for Belgium for several years,” says Alpert. “I got there and discovered a whole new world of chocolate and I fell in love.”

When she came back to Israel, she perfected her pralines before moving the operation to Degania. “I love nature, so for me it’s like being in heaven. What I created here is not only a chocolate shop, café and factory but also a tourist center about chocolate. We show how chocolate is made, and a workshop area is open all year, every day, for adults and children two and up.”

She employs 30-40 female kibbutzniks and area college students, who churn out 27 different kinds of pralines, as well as fun gift items such as chocolate spoons and shot glasses, sold online and to a growing number of Israeli mall stores, hotels and corporations. She’s working on getting Galita into some foreign markets, too.

The raw materials are sourced from Belgium and the staff is trained by Alpert in Belgian methods. As with all fine chocolates, Galita products are made with fresh ingredients and contain no colorings, preservatives or artificial flavorings.

Oded Brenner notwithstanding, much of the premium chocolate business in Israel is firmly in the hands of women working on their own or with their husbands. Though plenty of guys dig chocolate, scientific studies have confirmed that the stuff appeals to the female gender in particular: A much-cited US survey even found that many women would rather eat chocolate than have sex. 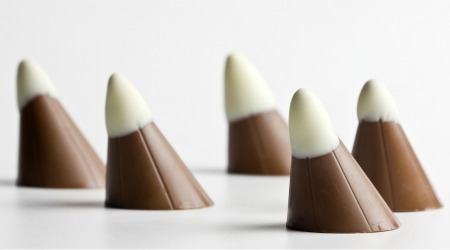 Women are prominent not only at the Israeli chocolate-makers mentioned above, but also at rising stars such as Trinidad Chocolate of Tel Aviv, Mishi Chocolate Boutique in Kiryat Tivon, Petah Tikvah-based Roy Chocolate, Ruti Chocolates in Ramat Hasharon, Gabrielle’s Madame Chocolate of Ramat Gan, Logochoko in Haifa, Chocolate Dreams in Modi’in and Jerusalem-based Nona.

Karina Chaplinski, a third-generation Argentinean chocolate confectioner, established De Karina Handmade Mountain Chocolates in Ein Zivan, a Golan Heights kibbutz, after emigrating to Israel with her husband and children eight years ago. Products are sold in the airport’s duty-free shop and in high-end hotels, wine and flower shops all over Israel, in addition to over the Internet.

Like Ornat and Galita, De Karina operates a popular visitor’s center, where adults and kids can watch the preparation of truffles and candies, sculpt with chocolate and sample tantalizing treats in a strictly kosher chocolate dessert café. 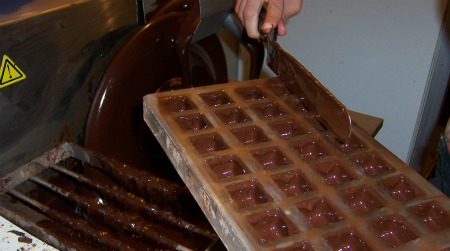 Pralines on the way at Sweet N’ Karem.

“We have so many people coming from all around the world that you have to book in advance,” says marketing director Ruth Sade, one of about 22 employees. “Many groups from the [United] States ask their tour operator to schedule a stop here.”

De Karina has capitalized on its location to associate its brand with the picturesque Golan Heights. Two of Chaplinski’s creations, for example, are Mount Hermon, a chocolate cone filled with dulce de leche dipped in white chocolate, and Gamla, a popular Rosh Hashanah treat made with milk, honey and hazelnuts. These sell well in the airport duty-free shops, alongside Ornat and other brands, as gifts to take home from Israel.

The appeal is not just sensory, Sade says. “To see someone who made aliyah [emigrated to Israel] and established a company that’s successful and sweet gives tourists a good feeling.”

Indeed, along with fine wines, olive oils and cheese, chocolate is making Israel into a sweet startup nation.