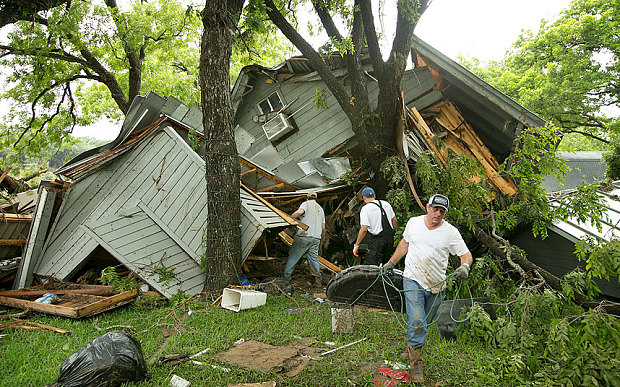 Israel-based humanitarian relief agency IsraAID has sent a team of volunteers to flood-ravaged Texas to help with relief efforts. This is not the first time the Israeli organization has sent disaster relief aid to the US.

The latest team of seven volunteers will help with removing debris from damaged houses in the Wimberley area.

“IsraAID will be mobilizing its relief team from Israel to support the thousands of people impacted by these latest storms,” said Shachar Zahavi, IsraAID’s founding director.

“The goal is to provide immediate relief and guide local communities in their efforts to clean out destroyed homes, as well as lay the groundwork for future rehabilitation and reconstruction initiatives,” reads an IsraAID fundraising statement. “This cleaning stage is crucial to avoid major health and hygiene issues from contaminated water, and open sewage. In addition, there is a psychological added value, as home owners are often so overwhelmed by the devastation and the loss of their entire lives’ valuables, that they are paralyzed by the situation. Coming in to clean up the mess and move them on to rebuilding helps create a positive momentum towards rehabilitation and recovery.”

IsraAID has also partnered up with US disaster relief organization Team Rubicom to help homeowners connect with the Federal Emergency Management Agency (FEMA) and receive assistance.

In the past, IsraAID sent disaster relief following floods in Denver and Detroit, hurricanes in Oklahoma, New York and New Orleans, and wild fires in Washington, among other sites.

CNN reported that so much rain has fallen this month in Texas that it could cover the entire state with eight inches of water.

US President Barack Obama declared the flooding a major disaster.

UNCOVER ISRAEL - Get the ISRAEL21c
Weekly Edition free by email
Sign Up Now!
Bring Israel's story to life.
Millions of people around the world rely on us to gain a deeper understanding of Israel. We are the trusted source for original content you won't find anywhere else.
You can make a difference. Donate today to support journalism that brings Israel’s story alive.
SUPPORT ISRAEL21c
Read more on:   News, IsraAid, humanitarian