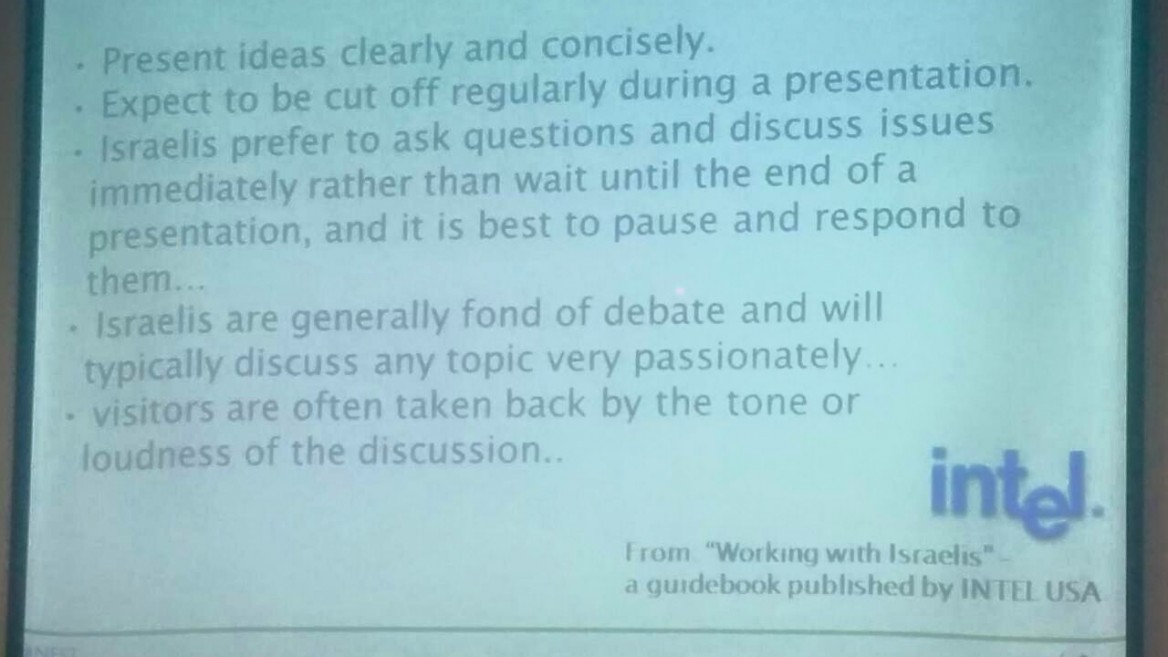 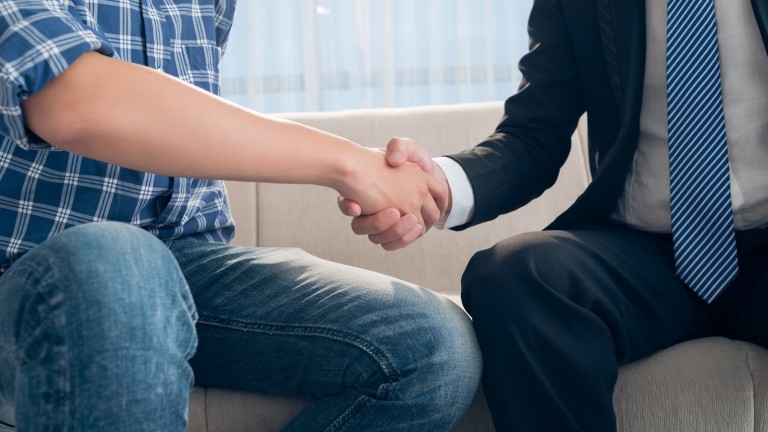 Meeting with a startup in Israel? Leave your suit at home. Image via Shutterstock.com

A guide to doing business in Israel from Intel has the local social-media scene giggling, liking and sharing the “guidelines” to a successful handshake with an Israeli startup.

The etiquette of doing business abroad and avoiding cultural missteps is a major factor for companies around the world. The latest post, courtesy of Intel USA, politely points out how to deal with Israeli chutzpah.

“Expect to be cut off regularly during a presentation. Israelis prefer to ask questions and discuss issues immediately rather than wait until the end of a presentation, and it is best to pause and respond to them…,” reads the slide from “Working with the Israelis” – a guidebook by Intel USA.

Another bullet point explains, “Israelis are generally fond of debate and will typically discuss any topic very passionately … visitors are often taken [a]back by the tone or loudness of the discussion.”

Moty Cristal, who teaches “Management of Bicultural Negotiations” at the Lauder School of Government, Diplomacy and Strategy of IDC Herzliya, used the slide outlining “tips for establishing effective relationships and communication with people from Israel” in a negotiation workshop he presented to entrepreneurs at the Herzliya Accelerator Center (HAC).

Reportedly, everyone gathered at HAC guffawed when the slide went up. 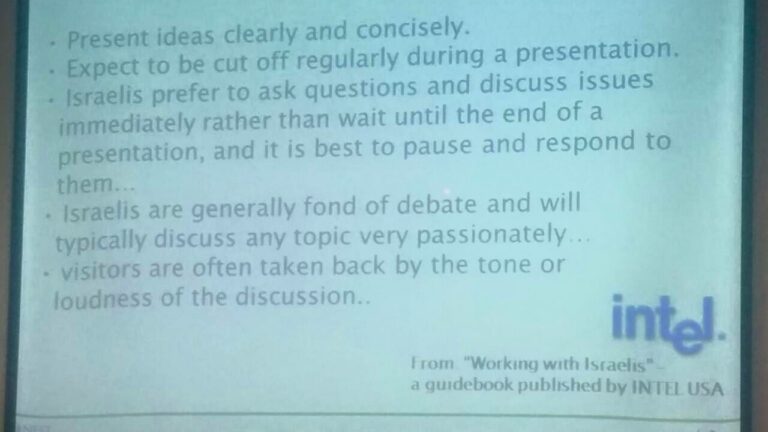 Edy Candel, CTO of GreenQ (greenq.co.il), was in the audience and took a photo of the slide. He shared it with Meir Dudai, cofounder and CTO at Jifiti.com, who then posted it to his Facebook timeline.

“I’m completely overwhelmed [that the post went viral],” Dudai tells ISRAEL21c. “All in all, I think it’s actually a nice attitude – this describes us very accurately. And these are not bad characteristics. I think that’s why Israelis relate to this and liked the post. As an Israeli who deals with the US a lot, I loved it since it’s so true.”
Responses to Dudai’s post concur. One person wrote, “Oh, It’s so American and wonderful. This is the closest thing to saying ‘Israelis are rude people’ without saying that Israelis are rude people.” Other comments include “hilarious,” “marvelous,” “it’s funny because it’s so true,” and “great.”

Israeli innovation is at the top of the world’s game because of our chutzpah. The Israeli secret sauce in high-tech is a combination of excellence in research, curiosity, patriotism, drive, risk-taking and nerve.

Lack of hierarchy is also a crucial element. For many from outside of Israel, this idea is radical. But in Israel, where army recruits can – and do — oust their unit leaders, it makes sense that in subsequent startups (the obvious next step after the army), everyone – from secretaries to new high-tech recruits to founders of companies – has a voice and at least three opinions.

The Facebook post also opened discussion about what the guidelines missed. People sharing the post added remarks about Israelis liking good snack foods on hand, the likelihood of businesspeople looking at their smartphones throughout a meeting instead of making eye contact, and the casual dress codes of the high-tech culture (jeans, T-shirt, sandals).

And as the Israeli high-tech scene delights in this guidebook to working with the Israelis, out-of-towners must feel a sense of relief knowing that it is almost impossible to make a business-etiquette faux pas in Israel.