It’s not for nothing that screenwriter Noa Berman-Herzberg is also known as the Serial Pickler and has over 60,000 followers on Instagram.

The large kitchen in her apartment on Tel Aviv’s Ben-Gurion Boulevard is a testament to her prolific output of pickles, 100 varieties at any given time.

Small and large jars line the long shelves and contain pickled or fermented fruit and vegetables such as pineapple, wild apple, eggplant, okra, watermelon, the round ha’rosh cucumber and fakos (snake melon). 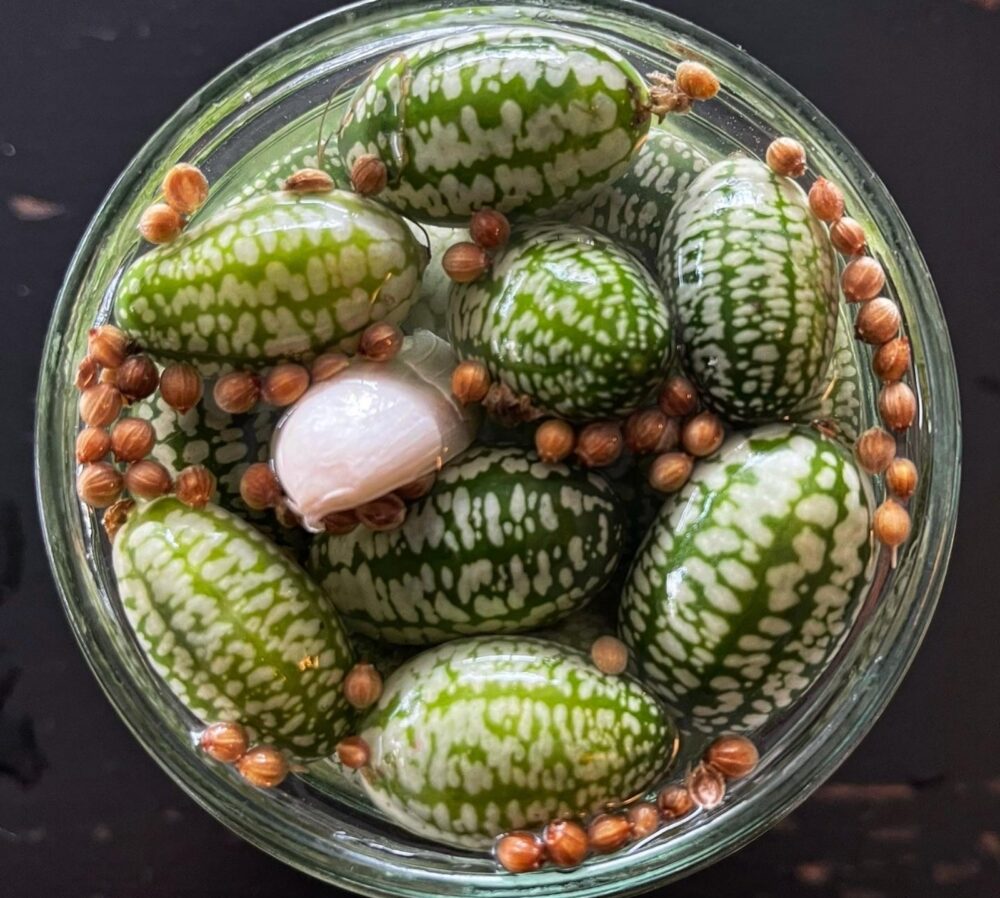 Fermented cucamelons at the Serial Pickler. Photo by Noa Berman-Herzberg

The oldest in the collection are the bulbs of garlic pickled three years ago. Alongside this impressive array are a large pile of books: The Noma Guide to Fermentation (Foundations of Flavor), The Complete Book of Pickling, The Art of Wild Fermentation and many more.

Berman-Herzberg does not sit down for a minute during our interview. She admits to being a “feeder” and bustles around the kitchen opening multiple jars and setting down meze-sized offerings, alongside rustic bread and white cheese.

To taste these fruits and vegetables is to feel you have landed the golden ticket to a Willy Wonka land of pickles. Flavors and textures are exciting and unexpected. 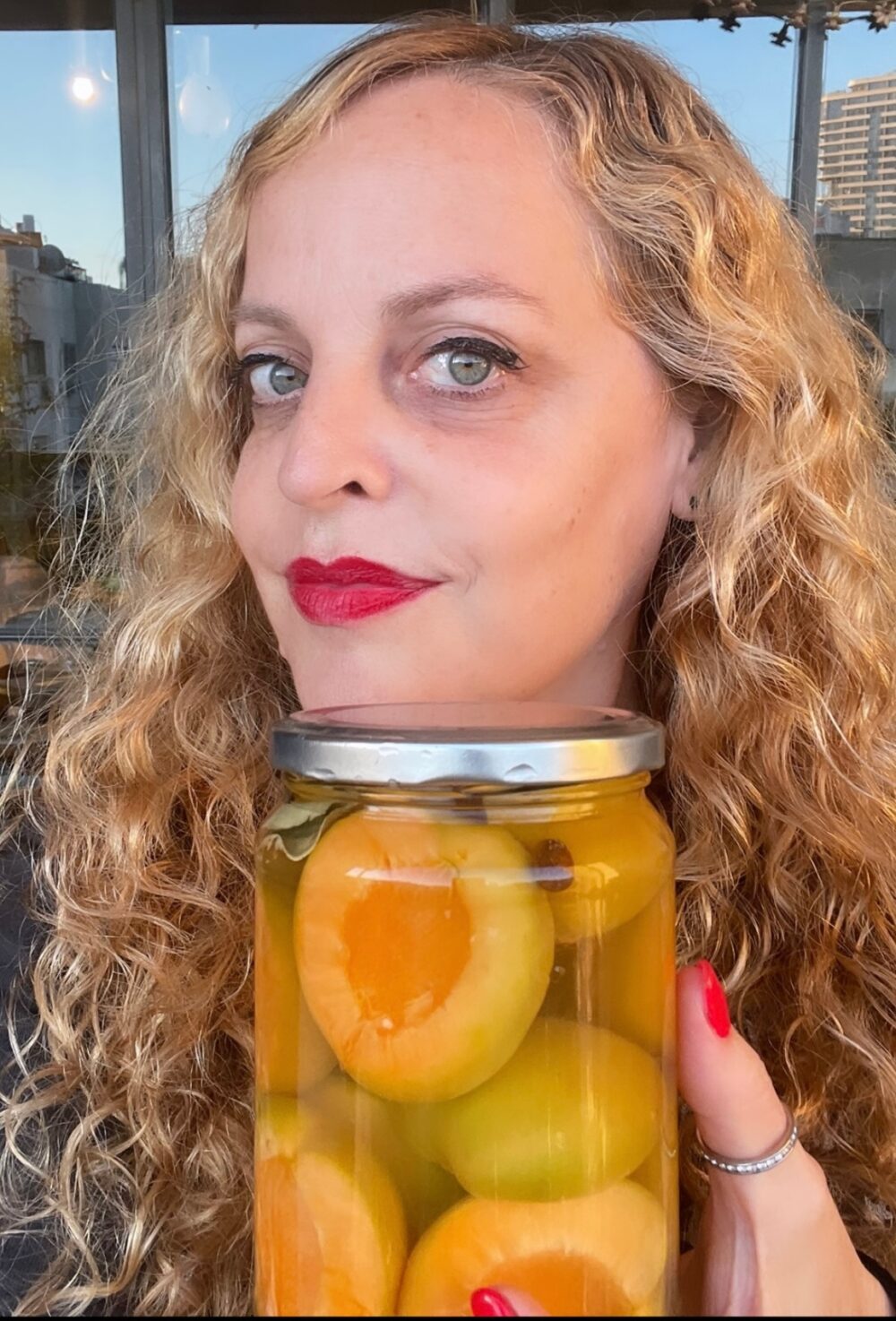 The Serial Pickler guides me along: she warns the pineapple pickle is fiery (it is!), the Korean cucumber has an unusual sweet and sour taste many find unpleasant (I loved it), and the miso spread — made by fermenting beans with added coffee granules –may be an unusual combination but it’s absolutely delicious.

When Berman-Herzberg describes a breakfast of pickled fruit with yogurt and granola or relaxing at the end of a summer day on the balcony with a shot of tequila and a tangy Korean cucumber pickle (her favorite), it all seems far from the Eastern European cuisine pickles are often associated with.

Yet, traditional cucumber and cabbage pickles was where it all started for her.

“My mom grew up in Siberia so jars of pickles on our kitchen countertop were a given,” says Berman-Herzberg, who recently returned from a trip to Krakow where she enjoyed a creamy dill pickle soup (Zupa Ogorkowa).

Berman-Herzberg’s curiosity to take pickling a step further started while on a trip to the United States six years ago. There, she came upon a huge selection of books on the subject.

“It was the 4th of July, the streets of New York were empty and I spent the entire day in the bookstore reading about pickling and fermenting. When I got back to Tel Aviv I started doing it insanely and my kitchen turned into a lab.” 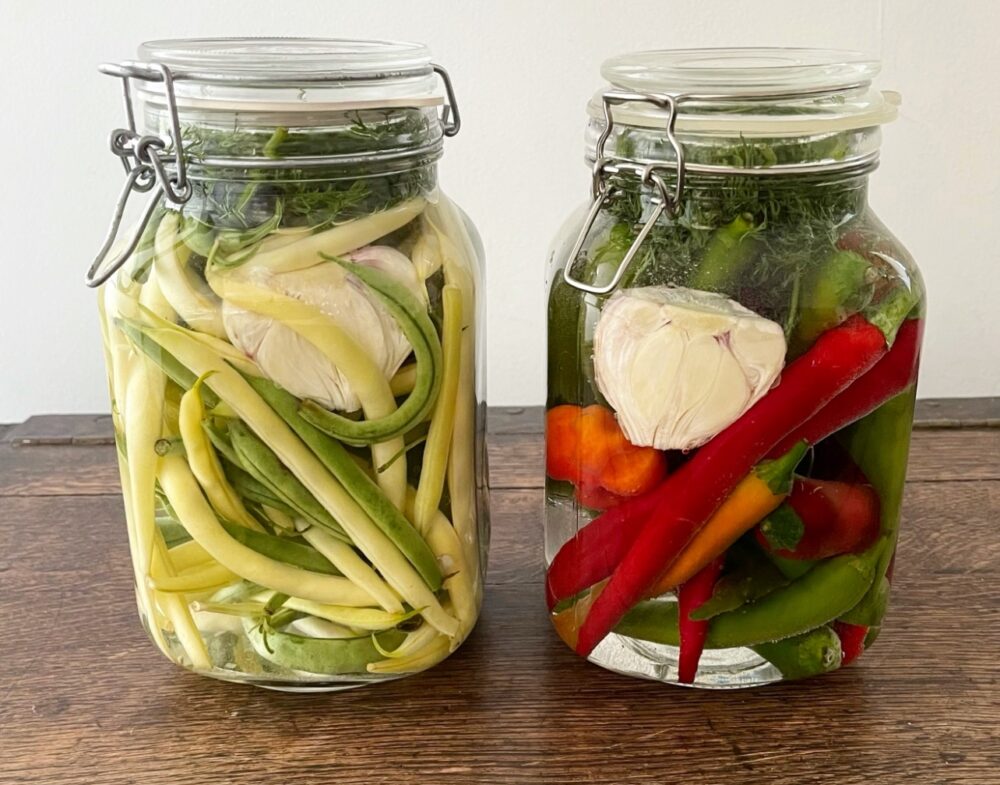 Jars of pickled produce at the Serial Pickler. Photo by Noa Berman-Herzberg

This was followed by begging friends to come and compare the results of her experimentation and joyfully taking different pickles to dinner parties for feedback. Her adult sons started asking if there were any normal pickles around to eat.

However, encouragement came from her mother and then father-in-law, owner of Domain Herzberg winery, who wanted to stock some Serial Pickler jars.

In those days, pickling wasn’t popular in Israel and Berman-Herzberg was often made to feel like a “weirdo.”

Undeterred, she opened the Serial Pickler Instagram page, launched an online course (10,000 people have bought it to date) and started to hold workshops at the long wooden table in her kitchen. 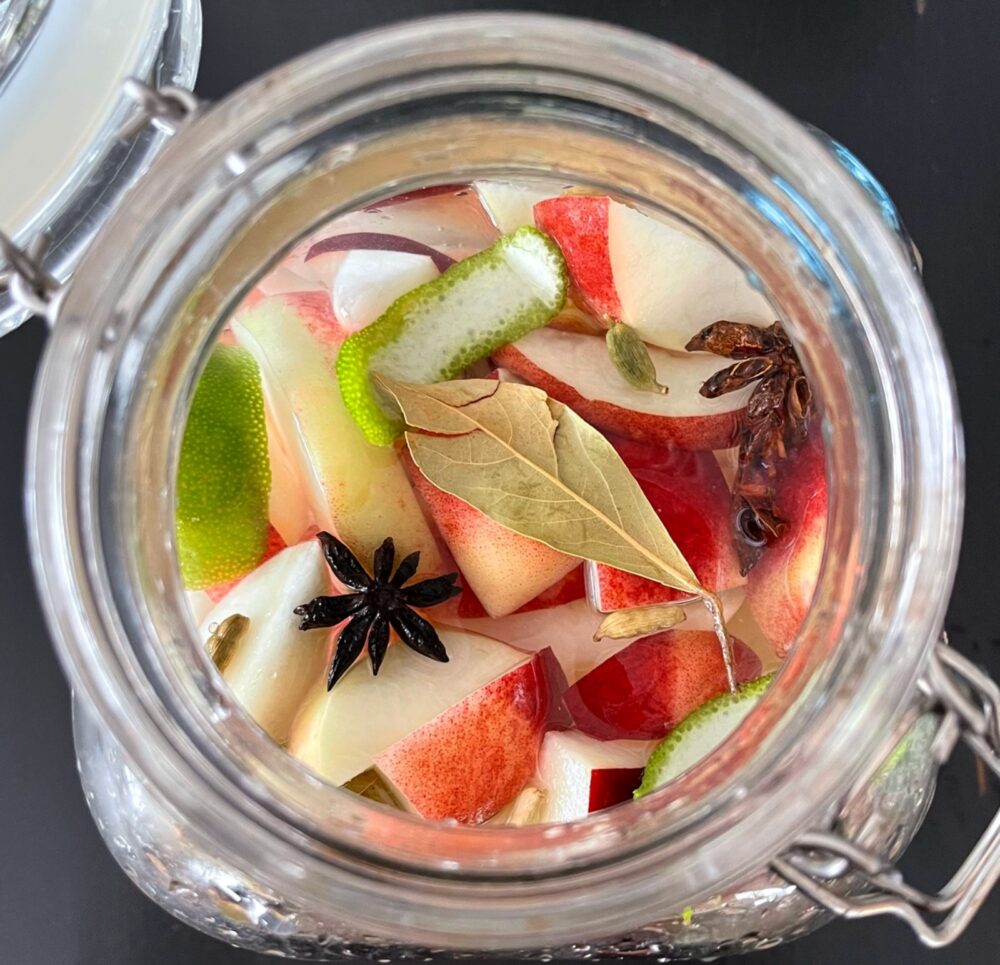 Sweet, sour and seasoned nectarines at the Serial Pickler. Photo by Noa Berman-Herzberg

Suddenly even chefs started messaging. “They would ask me if they could pickle a carambola or other fruits or vegetables. I am far from being a chef, yet they would ask me what my method is.”

Not being a chef was a blessing, Berman-Herzberg says, as it allowed her to have fun and adopt an adventurous attitude.

She is also into keeping it simple and geared for the home cook. Her equipment and ingredients are basic: vacuum sealed jars, spices, an assortment of vinegars (cherry, rice wine, nut, etc.), salt and whichever fruit and vegetables catch her fancy.

Berman-Herzberg, a screenwriting instructor at Jerusalem’s Bezalel Academy of Art and Design and Sam Spiegel Film School, could not resist having a narrative to go alongside her pickling. In 2017 she began to host “Sour Food, Sour Stories” — a culinary storytelling project.

In these events, 12 people from different places, generations, backgrounds and professions gather around Berman-Herzberg’s kitchen table and are offered sour pickles to eat. In return, they each share a personal story about something they felt they missed out on in life (the Hebrew word for “pickle” also means “missed out on”).

“The stories people tell can be about missing out on relationships, closures, opportunities, businesses, job offers, and houses or not
being there to say goodbye to someone. Some even tell stories about not being the person they wanted to be at that moment, or saying
something they regretted and can’t take back. Themes vary, but all have the same idea of the road not taken,” says the Serial Pickler.

Around 33 “Sour Food, Sour Stories” nights have yielded over 500 stories, mostly in Israel but also in New York and Istanbul where Berman-Herzberg was a guest of the Israeli cultural attaché. The selected stories will be part of a documentary series she is currently working on. (She also co-directed a documentary short, “Holy Holocaust,” which was recently acquired by The New Yorker.)

The Serial Pickler believes pickles have found their moment. “We need to rethink the way we prepare food,” she says. “Preservation is going to be especially important as we head into a future of food shortages and climate change.”