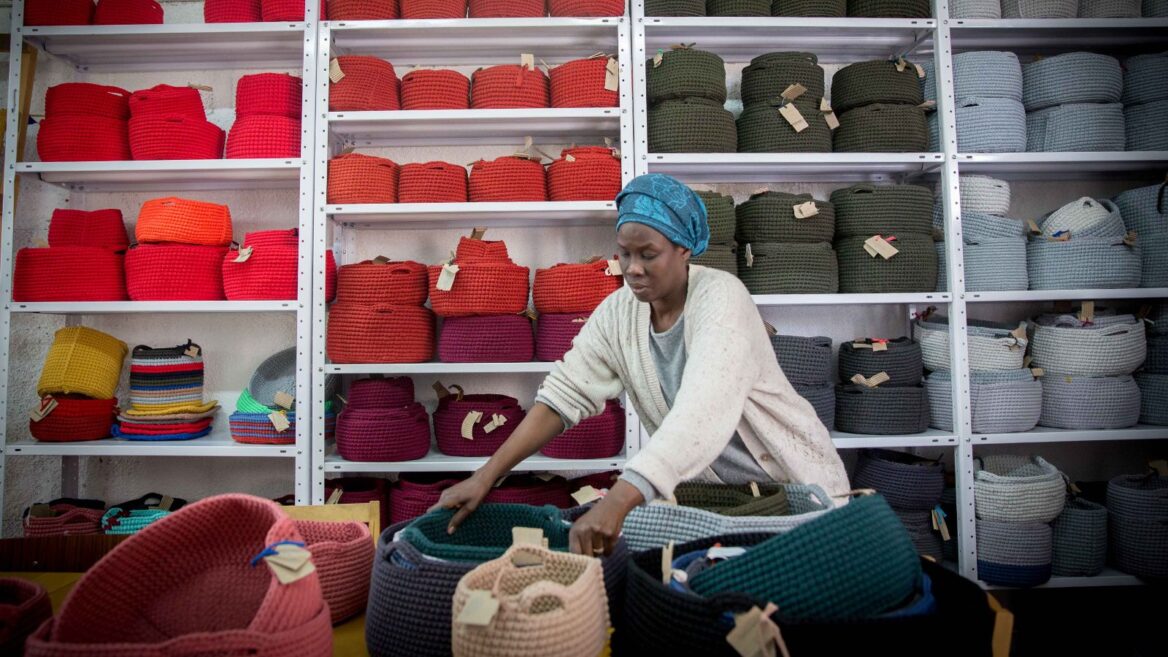 A participant in the Kuchinate art collective against the background of the baskets the women weave. Photo by Miriam Alster

At the beginning of the coronavirus crisis, South Tel Aviv was a no-go area for fear of what was back then a great number of Covid-19 cases. But to be honest, for most Israelis it’s been a no-go area for years, in large part due to the African asylum-seeking community that resides there.

“Outside, people are scared of black people, of Africans, of the asylum seekers. But if they come and speak to us and see what we’re doing, that’s good,” says Asmeret Haray. “Afterward they go to the bus station on the street and they’re not afraid of Africans. It changes something in their mind, and I think that’s very important.”

Haray is one of over 220 South Tel Aviv asylum seekers participating in the Kuchinate women’s collective.

As well as providing women with work, an income, an empowering community and a therapeutic framework, it also serves as a bridge between them and the wider Israeli public, changing perceptions and challenging prejudices.

Established in 2010, Kuchinate (“crochet” in Tigrinya) started off following a pilot project to give therapy to African women who suffered traumas on their trek through the Sinai Desert to Israel.

“I was asked to join a pilot project with the African Refugee Development Center to give therapy to women who had been through the Sinai and at that time, which was 2010, the women were in a state of survival,” recounts clinical psychologist Diddy Mymin Kahn, cofounder and director of Kuchinate. 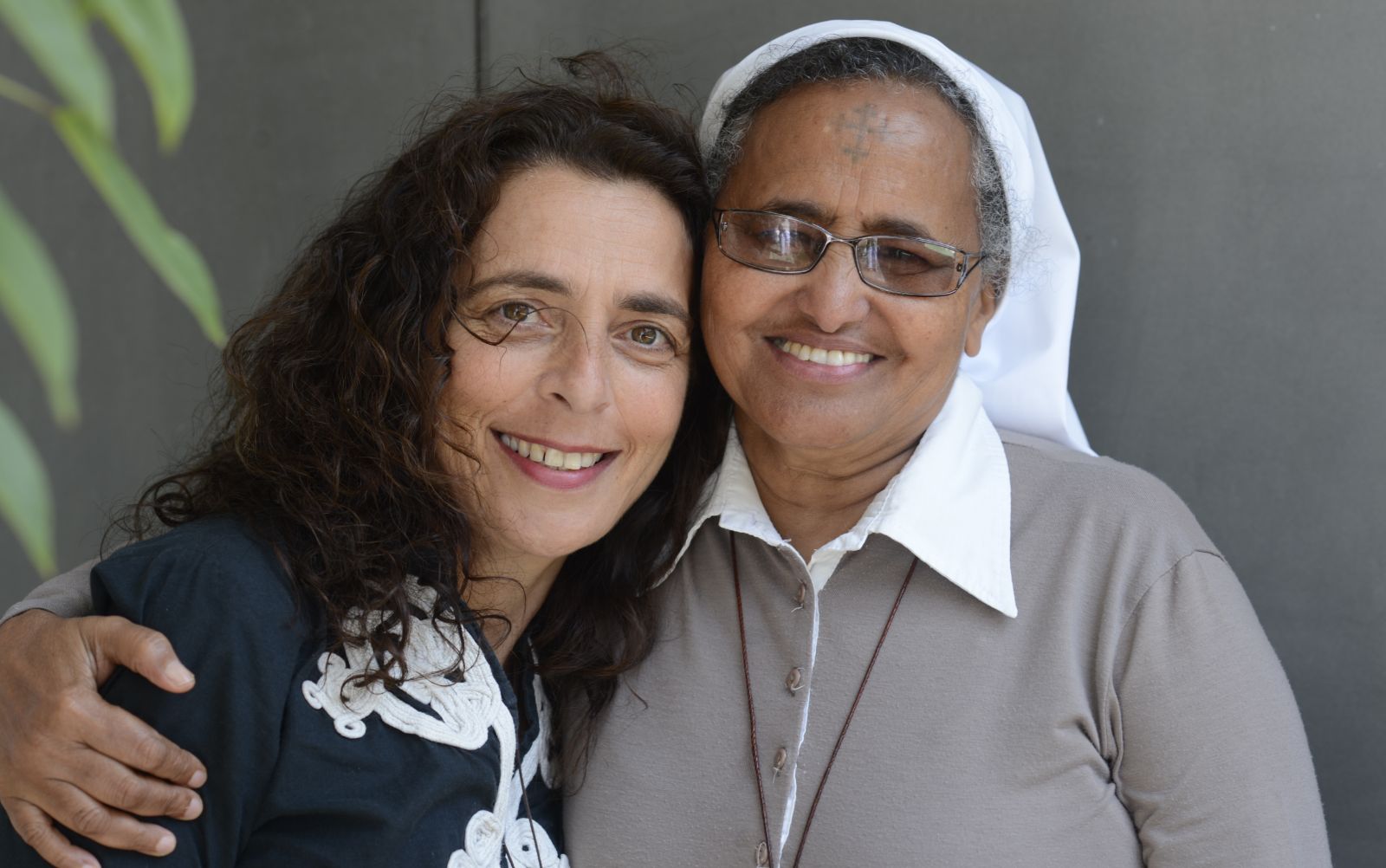 And yet, traditional Western therapy was foreign to the women, who came to Israel mostly from Eritrea, as well as from South Sudan and Darfur. “They don’t do that kind of assistance, especially in Eritrea,” Kahn explains.

She therefore went on to look for a rehabilitation framework that would be both income-generating and therapeutic and came up with the idea of a collective that brings women together while helping them make a living.

“The whole sort of community and the doing of Kuchinate is itself therapeutic,” she says. “Artwork and craft are very, very helpful to overall wellbeing and mental health.” 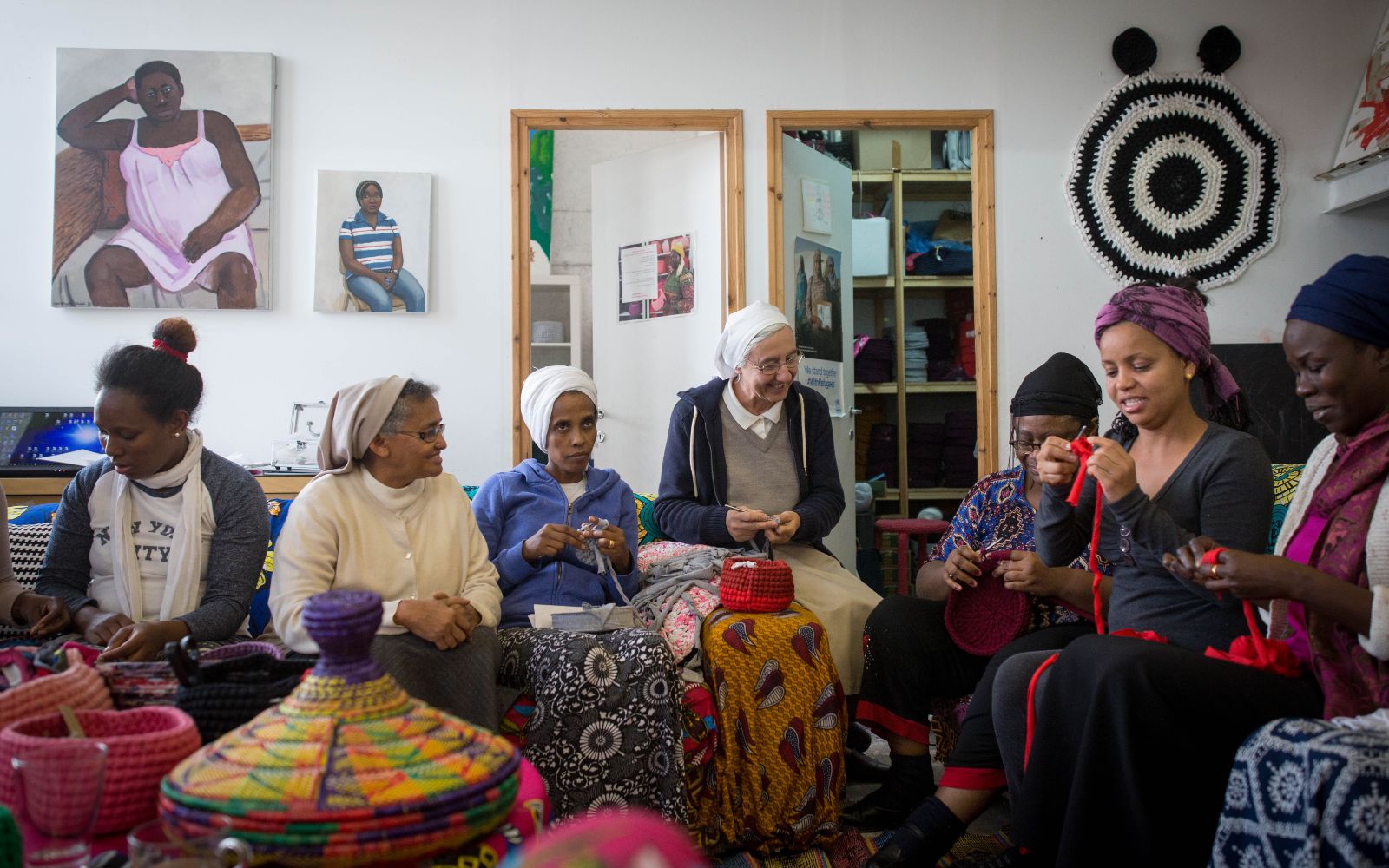 While at first the participating women created products such as keyrings and kippot, Kahnand fellow co-director Sister Azezet Habtezghi Kidane decided to move more in the direction of design-oriented products, and had someone teach the women how to crochet baskets that would be appealing to the Israeli public.

In Covid-19-free times it also hosts groups such as Birthright and high-tech workers for traditional coffee ceremonies, meals and crochet lessons, exposing the visitors to the asylum seekers’ life stories and work.

Hosting groups, Kahn says, is itself an empowering experience for women who often suffer from racism and xenophobia in their daily lives.

“You’re no longer a transparent refugee in the street,” she explains. “They’re learning from you, they’re complimenting your food from your culture.”

“There’s a very positive response from everyone’s who’s been here,” she adds.“You can’t help but be moved.”

Another aspect of the collective is its art collaborations with different artists that are exhibited in galleries and museums around Israel and the world.

“A lot of our art is about opening minds, trying to get people to emphasize and be compassionate toward the plight of asylum seekers,” says Kahn.

“The story of Kuchinate is not that different from our collective story as Jews,” she adds. “We were all once refugees.”

Something to think about

Kuchinate pays the women for their work, and over time has employed some of them as managers.

One such manager is Haray, who joined Kuchinate over two years ago and oversees the work schedule. She arrived in Israel eight years ago and has since become a mother to two young daughters.

Kuchinate, she says, gives female asylum seekers a sense of community in what is otherwise a lonely experience.

“For a woman, it’s very difficult in Israel,” she says.“When you come to Kuchinate, you see a lot of girls who have an even harder time. First off, it’s good for them to know that others are also facing problems.”

Another benefit, she says, is learning new skills and opportunities.

“I don’t just sit there as I did in the past, working and that’s it and then going home,” she adds. “They give us something to think about, get our heads working.” 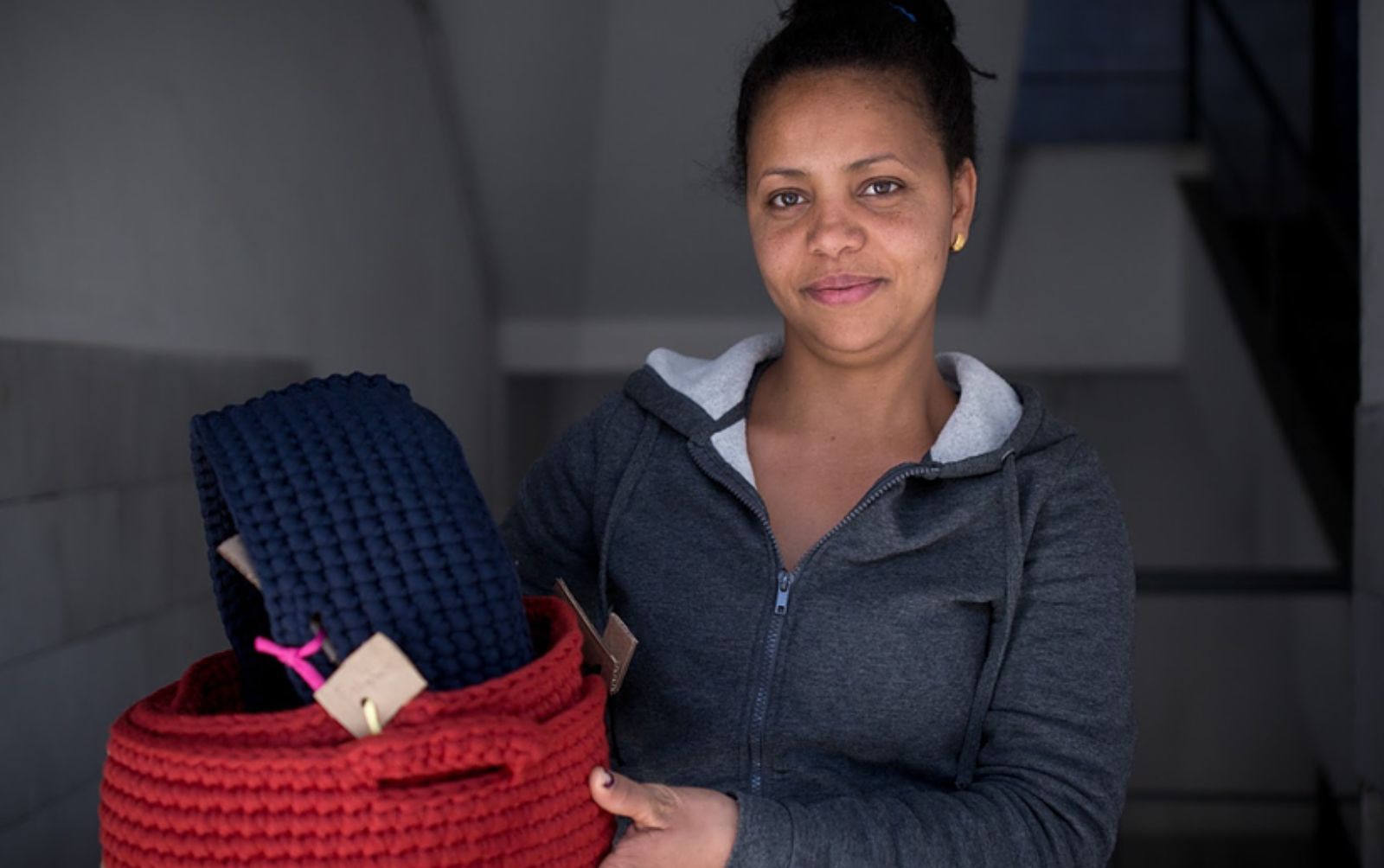 “For me, the place is really nice because it’s like being at home. We’re a lot of girls there,” she says.

Gebrezgbher arrived in Israel eight years ago and is married with two kids. She joined Kuchinate three years ago, and believes that the collective makes a significant impact in relations with local Israelis.

“A lot of people got to know us. And when people buy from us it helps us a lot.”

Due to the coronavirus crisis, visits to the workshop have come to a halt. So have the women’s social activities. Prior to the pandemic, many of them already worked from home, utilizing the time their children were asleep. But many came in to pick up materials, hang out, have lunch or learn new skills.

Women working and socializing at Kuchinate. Photo by Miriam Alster/FLASH90

The crisis has also impeded the collective’s funds – prior to the outbreak, half of its funds were from sales and half from donations from UN commissions, Christian organizations in Europe and private donations.

“Corona has put a lot of heavy needs on us, because whatever they were making is never enough,” says Kahn. “There’s a lot of pressure on us to create more jobs, to pay more money. We’re trying to adapt and find ways to bring in an income given the times and the situation.”

These adaptations include, for example, creating facemasks, selling through a pop-up store further north in Tel Aviv and focusing on Kuchinate’s online store, as well as giving sewing machines to women to work from home.

“Our aim is always to keep developing,” Kahn says. “We keep looking for the next thing that we can make that will be income generating and teaching life skills to the women.”