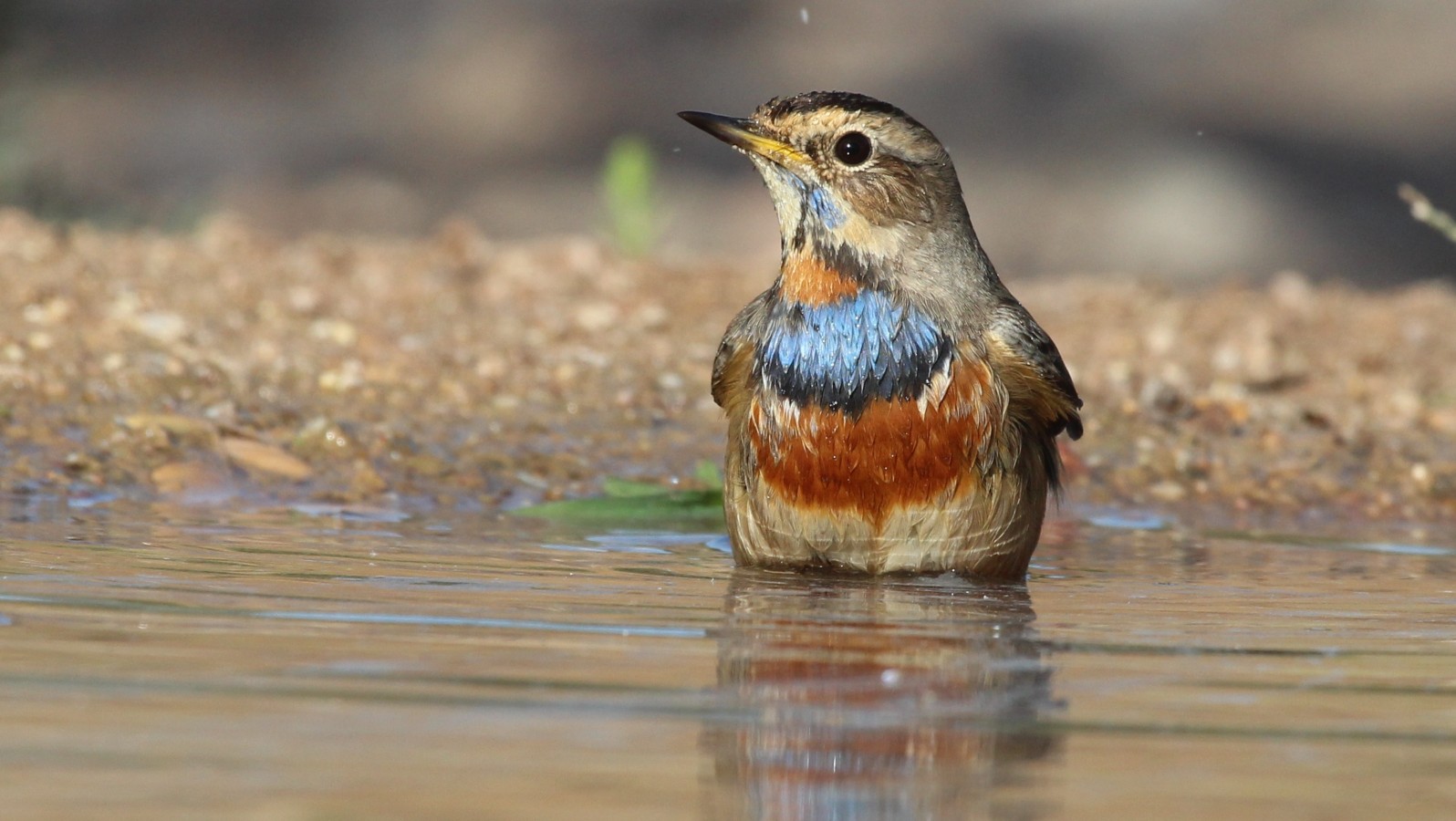 In Eilat, everyone bands together for the safety of birds

International Birding & Research Center in Eilat wins UN recognition for community-based conservation of the flyway for millions of migratory birds.

Millions of birds migrate across Eilat and the southern Arava desert twice a year because this strip of land in southern Israel is the only land-bridge connecting Eurasia and Africa.

To make the route as welcoming as possible, the International Birding & Research Center in Eilat has engaged local stakeholders in keeping the flyway clear of hazards such as wind turbines, cable antennas, power lines and even glass façades that birds can crash into.

This community-based Israeli conservation initiative was chosen as one of the 19 most outstanding projects presented, out of a field of 258 candidates from 26 countries, at the recent UN Conference of the Parties (COP15) on biological diversity.

“We are located on one of the most critical migration bottlenecks in the world,” said Noam Weiss, director of the center. 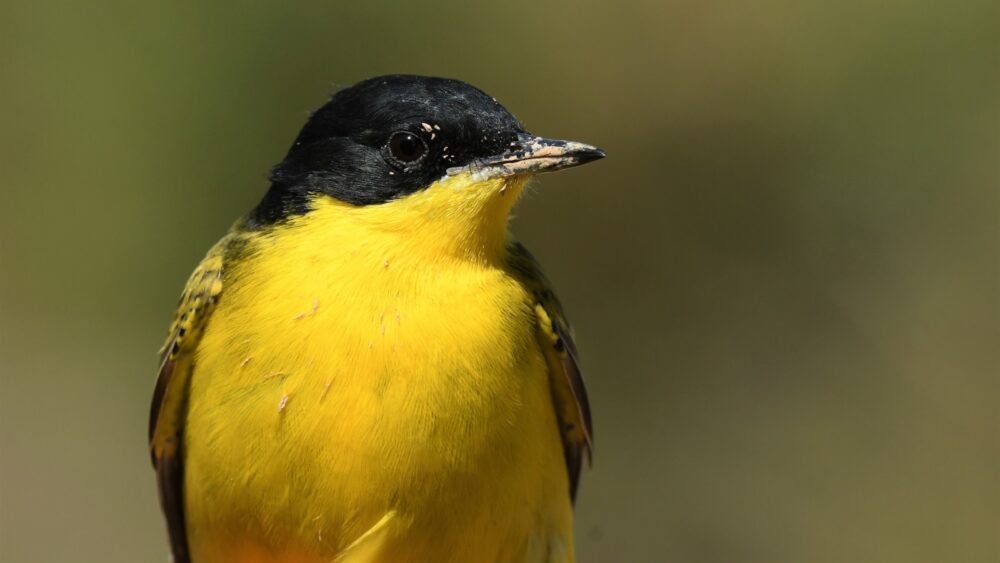 He noted that the migratory birds used to enjoy stopping to rest in thriving habitats such as the Eilat saltmarsh, which is now practically extinct.

“Today, we must provide manufactured habitats – gardens, fields, orchards, sewage treatment works and saltpans,” he said. “To improve these manmade stopover sites for the birds, we need public support and participation and creative collaborations.”

The center educates area farmers on the benefits of migrating birds to control pests “just as well or even better than pesticides” and encourages them to make the birds welcome on their farms. 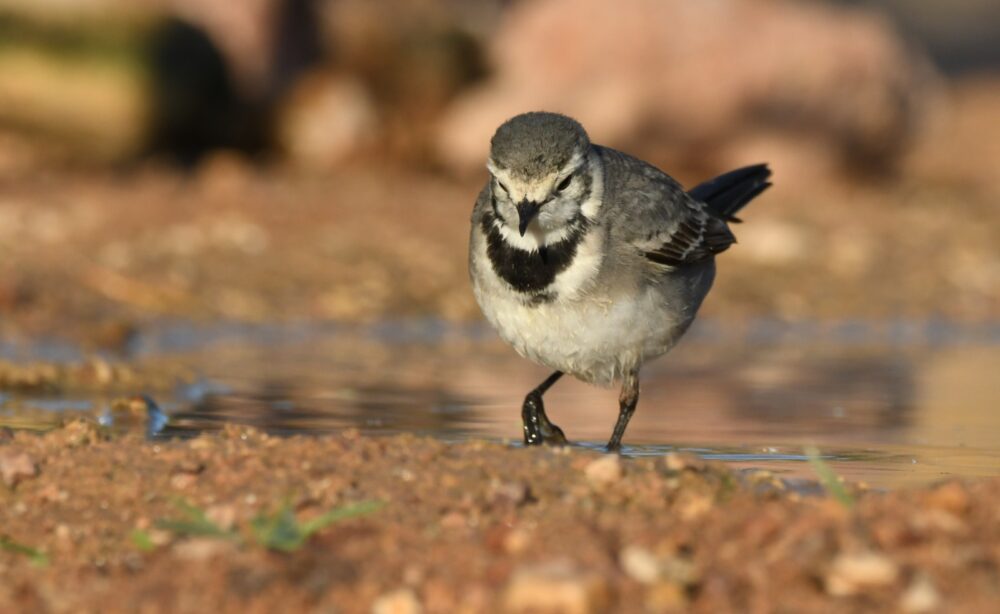 The center also works with the local water company, Ein Netafim, to make the treated water reservoir a safer and better site for the birds.

“We need deep roots in our communities, research that involves the farmers, and tons of good will,” Weiss said. 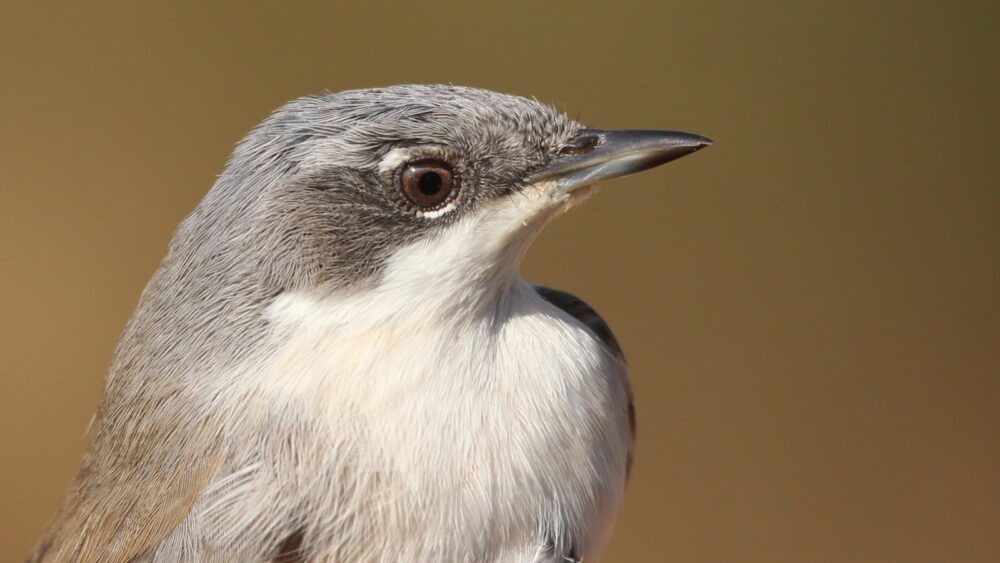 “Any visitor to the Eilat Bird Sanctuary will realize that it is built with the birds’ needs in mind, but at the same time allows human visitors to appreciate and identify with the migratory birds.”

Tens of thousands of annual visitors come to the sanctuary’s research station to observe the staff band the visiting birds and examine their physical condition, assessing their ability to complete their epic journey. 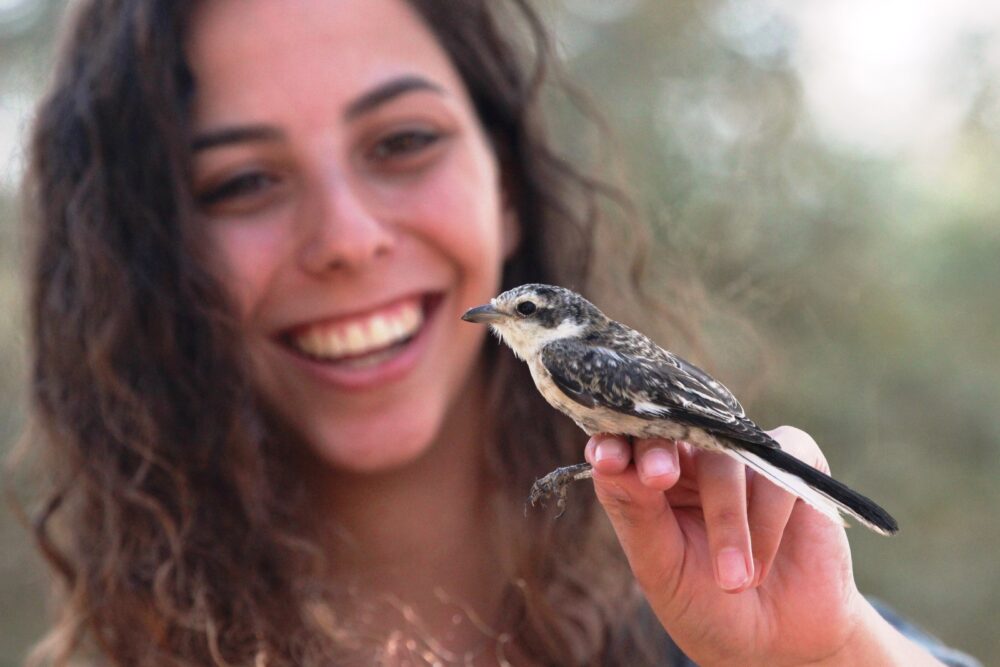 An Eilat Bird Sanctuary volunteer with a masked shrike. Photo by Noam Weiss/IBRC

“People come and watch our research being done, ask questions and even get to hold a tiny bird and release it to its challenging journey,” Weiss said.

“It’s a life changing experience,” said Iris Gorin of the Society for the Protection of Nature in Israel, who runs the Eilat banding station.

“A kid or adult holding a warm and energetic bird and letting it go back to its migration challenges will wish with all their hearts that it will make it safely home. They will then love and conserve birds in their gardens or at work, now and forever.” 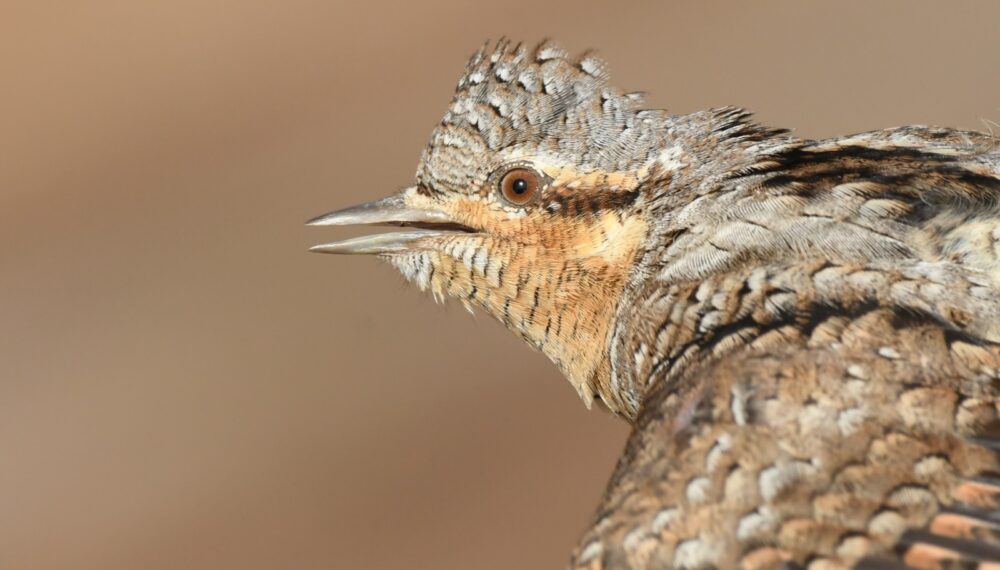 This is a Eurasian wryneck. Photo by Noam Weiss/IBRC

Tzadok Zemach, maintenance manager of the bird sanctuary, said he always wanted Eilat residents to see the sanctuary as an extension of their own home.

“Eight years ago we started conducting large communal events at the sanctuary, inviting our communities to see, understand and love birds. And they came in their thousands — schools, workplaces and families, who even bring their kids an hour before school starts to see the birds every morning.” 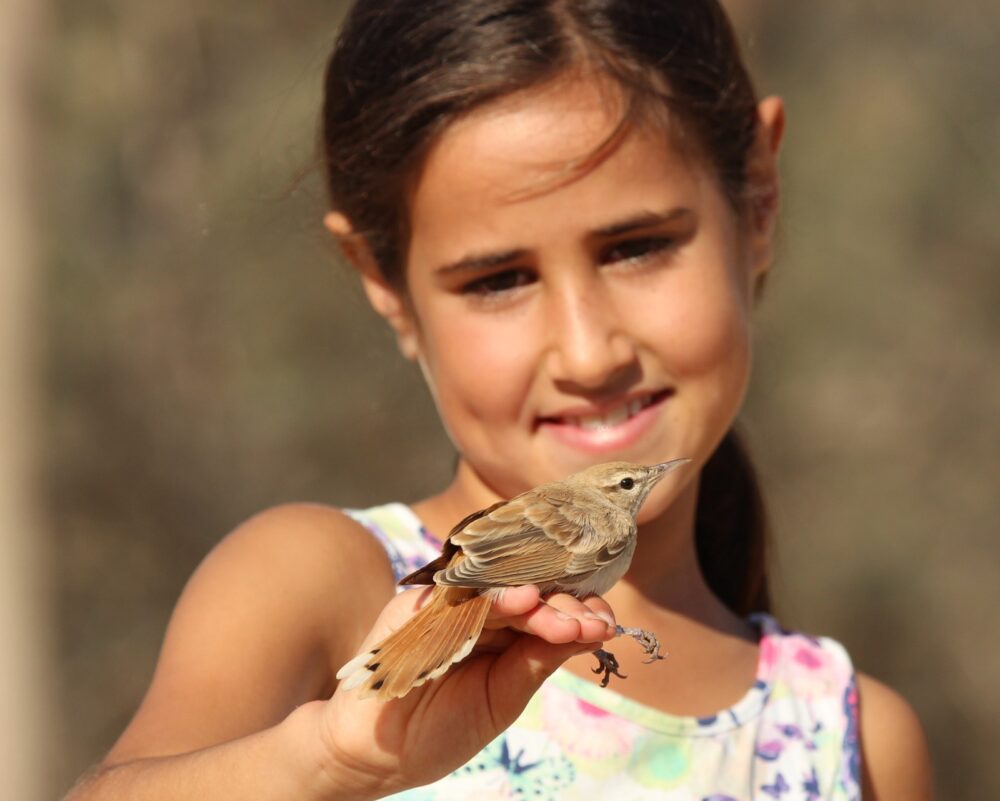 A child with a rufous-tailed scrub robin. Photo by Noam Weiss/IBRC

The center’s success in recruiting the community to help it further its conservation goals translated into practical achievements.

Four wind farms that had been planned along the main flyway were stopped by popular demand. The treated water reservoir is now undergoing a major upgrade for the sake of the birds.

A local regulation was passed limiting the glass on any building’s front along the flyway to a maximum of 50 percent.

Salt of the Earth, a salt-mining company, invested in the biodiversity of its saltpans, now called flamingo pools. 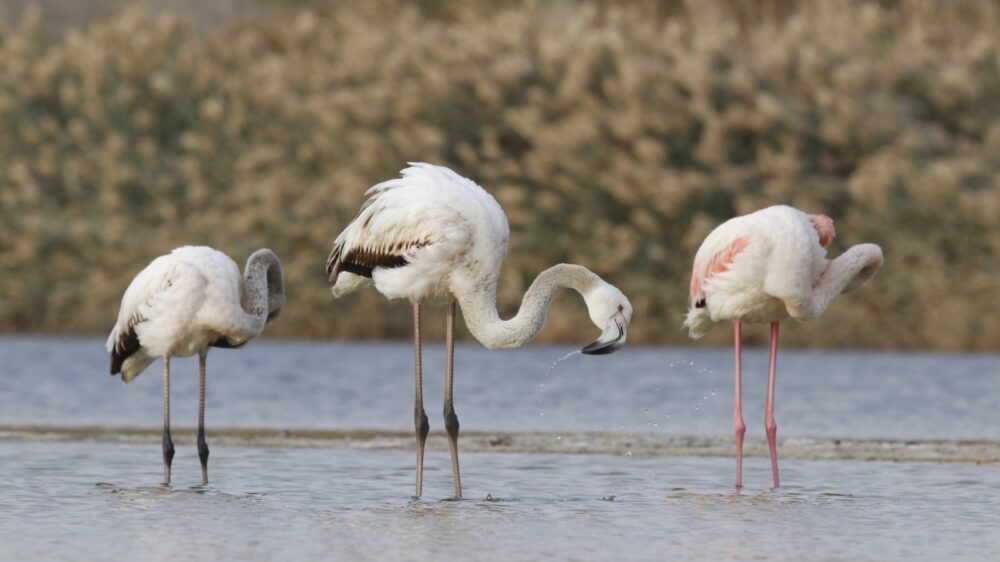 “All these decisions were made for the safety of the birds, by good intentions and good people,” Weiss said.

The international recognition afforded by COP15 “gives us strength and motivation,” he added.

“Nature conservation can be a very lonely job. Nevertheless, here in Eilat we are surrounded by dedicated volunteers and a supportive and loving community,” said Weiss.

“People say that money and political power drive the world, but emotions are stronger than money. Our local community loves birds and is prepared to go a long way for them. We create together a real change in the way our region relates to nature.” 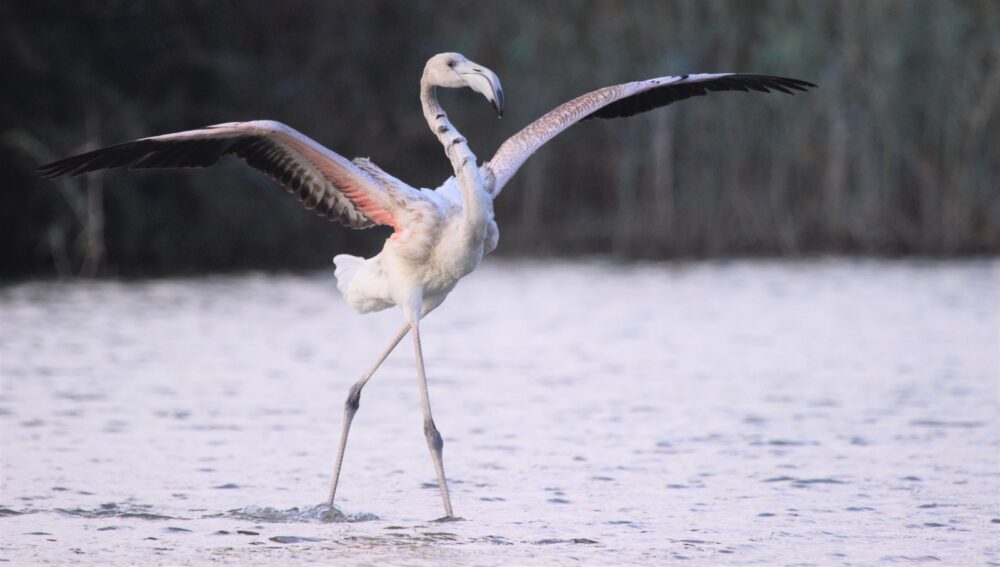 A flamingo spreading its wings. Photo by Noam Weiss/IBRC

The International Birding & Research Center in Eilat is a partnership of the Society for the Protection of Nature, KKL-JNF, the Israel Nature and Parks Authority, the municipality of Eilat, the Eilot Regional Council, the Eilat Tourism Corporation and the Ministry of Tourism. 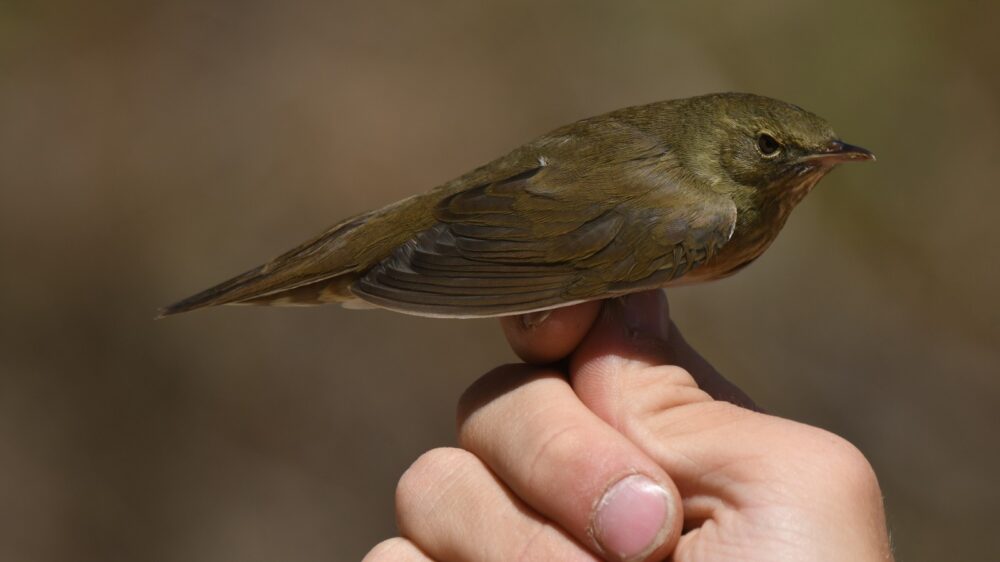 “Eilat is exceptionally proud to be such an important stopover site of the flyway of so many birds,” said Mayor Eli Lankry. “The chosen project is based on the work with the loving Eilat and Eilot communities who embrace the birds and the work of the Bird Sanctuary. Winning this award expresses the respect owed to this unique community-based nature conservation work and all the involved partners.”