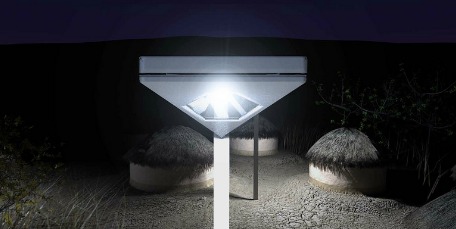 Lighting up roadways with no need for electricity.

How can local governments keep public spaces and roads illuminated at night in places where there’s no electricity, or an unreliable supply? Solar power, obviously.

But there’s a catch.

This could prove a godsend to developing nations where a lack of street lighting results in dangerous driving conditions and far slower economies.

“It’s designed with the African market in mind,” explains Jakoby, who spent many years in Nigeria overseeing construction projects.

“In Africa, the heat, humidity, mud and dust are given factors that have to be taken into consideration. In many places there’s no electricity infrastructure, so the fixtures have to stand alone. The other major issue that has to be dealt with is criminality. Vandalism and theft of public property is widespread,” he says.

With these parameters in mind, Jakoby sat down to approach the technological challenge a little over two years ago. He brought together some of Israel’s leading experts in fields such as design, electronics, mechanics and optics to devise a workable solution.

“My background is in electronics and I had the vision and understood the needs of this market. Our team was able to think out of the box and came up with some innovative approaches to the issues. That’s what Israelis know how to do best,” he says.

Easy to install and maintain

Jakoby is not the first to think of solar-powered solutions for lighting the streets of poor countries.

“Chinese companies have been making similar light fixtures for several years now, but almost all of them involve inferior technologies. They are inefficient, have shorter life spans and break down far too regularly. The Chinese are excellent at copying Western ideas, but not so good at designing new products,” says Jakoby. 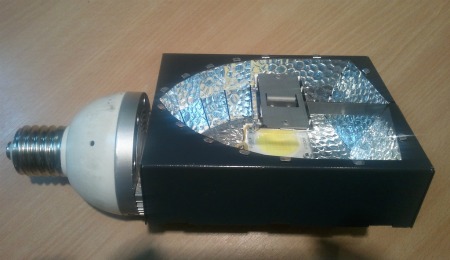 “We’ve designed an all-in-one package — one box containing all the parts. In other systems, each part is supplied separately,” says Jakoby. “It’s a modular system that can be designed according to need.”

GLWS orders the components from manufacturers according to very exact specifications.

A major innovation, he says, is the built-in microprocessor that constantly monitors and regulates factors such as bulb temperature and battery charge.

“The problem with other solar light fixtures is usually the components’ integration — they don’t always work together optimally. We invested a lot of thought in this aspect, and designed the microprocessor accordingly. We use a particularly high-quality type of LED [light-emitting diode] lamp that can work in extreme conditions and does not burn out as easily as the ones used by our competitors. The junction temperature of our LED is 60 degrees Celsius. The microprocessor automatically dims the light if it approaches this temperature.”

Another advantage: “We can lower electricity consumption by an average of 60 percent. This translates into negating the need for complete power stations,” he says.

As important as its technical aspects, is the fact that the fixture is theft-proof, he adds. “We designed the light poles in a way that no one can steal the batteries from inside. There’s also the option of adding a CCTV camera to the pole so that anyone trying to vandalize it will be seen from the central control facility.”

This facility, usually operated by a municipality or local government, can monitor the performance of all the installed light fixtures.

“We can see if a bulb has burned out or a solar panel is not working optimally from afar, and dim or raise the lights by remote control, using radio frequencies,” he says. “This means easier upkeep of the fixtures, lower energy consumption and longer working lives.”

Jakoby is using his extensive web of contacts in Africa to get the project off the ground.

“Ultimately, marketing a revolutionary product such as ours needs personal contacts in the initial stage. We started in Nigeria and spread to other countries. We’re already developing lighting systems for Nigeria, Ethiopia and Colombia, and are in the negotiation process with several other countries. Meanwhile, there’s great interest from countries in other parts of the world.”

The fledgling company is owned by Globe International Holdings S.A. (Globe), a multinational concern engaged in a wide range of business activities throughout the world.

“Our approach is that we don’t sell lamps,” says Jakoby. “We produce light.”

UNCOVER ISRAEL - Get the ISRAEL21c
Weekly Edition free by email
Sign Up Now!
Bring Israel's story to life.
Millions of people around the world rely on us to gain a deeper understanding of Israel. We are the trusted source for original content you won't find anywhere else.
You can make a difference. Donate today to support journalism that brings Israel’s story alive.
SUPPORT ISRAEL21c
Read more on:   Social Action, Sustainable energy