Ancient Greek inventor Archimedes may have had his Eureka moment in the bath, but modern-day Israeli student Yaniv Shlosberg recently had his own moment of clarity during a swim in the sea.

Inspired by the sight of seaweed on a rock, he wondered whether the algae could be used to create green, carbon-negative energy. A bit of research and one publication later, the answer became a resounding yes.

The negative effects of fossil fuel usage have long led researchers to look for cleaner, planet-friendlier ways to provide the world with power. One such path of research involves using living organisms as the source of electrical currents in microbial fuel cells, but the problem with this is that the bacteria need to be constantly fed and in some cases are pathogenic.

Another option is a technology called Bio-PhotoElectrochemical Cells (BPEC), where the source of electrons can be derived from photosynthetic bacteria, especially cyanobacteria, or blue-green algae.

The only problem here is that it is less commercially attractive, since the amount of current that can be produced is smaller than that of other sources such as solar cell technologies.

“I had the idea one day when I went to the beach,” explains Shlosberg. “At the time I was studying the cyanobacterial BPEC, when I noticed seaweed on a rock that looked like electrical cords. I said to myself – since they also perform photosynthesis, maybe we can use them to produce currents.”

Shlosberg and a team of researchers from the Technion – Israel Institute of Technology and the Israel Oceanographic and Limnological Research Institute began exploring the use of Ulva, or sea lettuce, which grows plentifully both naturally and for research purposes on Israel’s Mediterranean shores.

After developing new methods to connect between the Ulva and the BPEC, currents 1,000 times greater than those from cyanobacteria were obtained – currents that are on the level of those obtained from standard solar cells. 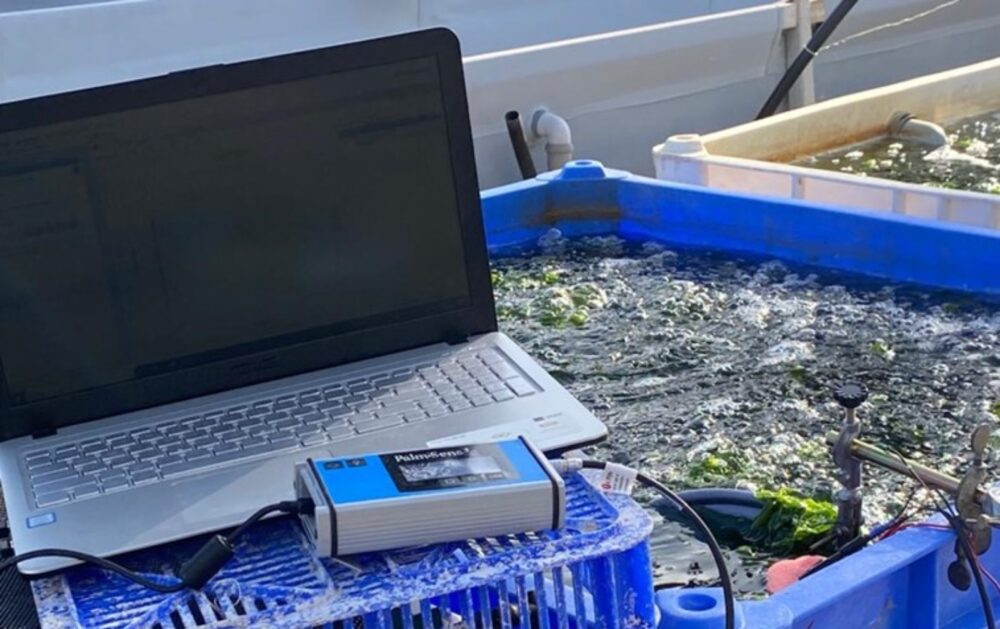 One of the Ulva growth vats at the Israel Oceanographic and Limnological Research Institute in Haifa. The vat is near the beach and fresh seawater continuously flows through the system. Photo courtesy of the Technion Spokesperson’s Office

The results were recently published in Biosensors and Bioelectronics.

Currents in the dark

The researchers note that the increased currents produced by Ulva are due to the high rate of seaweed photosynthesis and the ability to use the seaweed in their natural seawater as the BPEC electrolyte – the solution that promotes electron transfer in the BPEC.

In addition, the seaweed can also provide currents in the dark thanks to a process of respiration whereby sugars produced in the photosynthetic process are used as an internal source of nutrients.

Not only is this new method carbon neutral, but is in fact “carbon negative,” with the seaweed absorbing carbon from the atmosphere during the day while growing and releasing oxygen.

No carbon is released during the harvesting of the current during daytime, and the seaweed releases the normal amount of carbon during respiration at night.

The researchers have so far built a prototype device that collects the current directly in the Ulva growth vat and believe that it can be further improved and developed as a future green energy solution.

“It is a wonder where scientific ideas come from,” Shlosberg concludes.

UNCOVER ISRAEL - Get the ISRAEL21c
Weekly Edition free by email
Sign Up Now!
Bring Israel's story to life.
Millions of people around the world rely on us to gain a deeper understanding of Israel. We are the trusted source for original content you won't find anywhere else.
You can make a difference. Donate today to support journalism that brings Israel’s story alive.
SUPPORT ISRAEL21c
Read more on:   Technology, Algae, Environment, Sustainable energy, Technion-Israel Institute of Technology, Seaweed