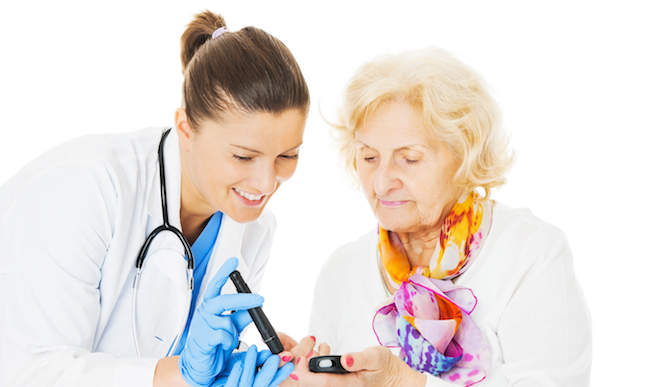 By 2050, one quarter of the people in the world will be over 60 years old. Unfortunately, as baby-boomers age they are more susceptible to conditions such as type 2 diabetes, which is on the rise worldwide.

Researchers have noticed a worrying link between type 2 diabetes and dementia. It seems that diabetes causes us to age faster. As a result, quality of life for the elderly is a concern for professionals such as Dr. Tali Cukierman-Yaffe, an endocrinologist and epidemiologist who started a new center in Israel to help people over 60 age better.

The Center for Successful Aging with Diabetes at the Sheba Medical Center at Tel Hashomer is a model for how diabetes can be managed in the Western world.

“The world’s population is aging,” says Cukierman-Yaffe. “We are in the midst of a biological experiment. The human race has never encountered the age that people have reached today. There will be so many medical and social issues that we don’t know how to confront,” she tells ISRAEL21c.

“How do we want to see this population living in the next 50 or 100 years? We want to see these people functioning, living on their own and taking care of themselves.”

Based on referrals or self-referrals, patients get a five-hour physical and cognitive checkup from a team of specialists under one roof. Not only does this spare the patient from running around, but also enables the healthcare professionals to see the bigger picture and give recommendations that treat the whole person.

According to Cukierman-Yaffe, the clinic is the first of its kind in the world to take a holistic look at managing adult-onset diabetes, and subsequent complications like dementia.

Organizations from Japan to the United States are asking to know how to replicate the model, she says.

Cukierman-Yaffe has spent about a decade researching the link between diabetes and aging. “Since I am a clinician, I wanted to bring the research into the clinic. That’s how we founded this Center for Successful Aging,” she says.

“Findings over the last five years suggest that people with diabetes experience an accelerated loss of physical function because they have more muscle loss. People seem to have more functional impairments and more disabilities, so diabetes seems to be a disease of accelerated aging,” she explains.

Cukierman-Yaffe started working in this area at McMaster University in Canada, where she was inspired by her supervisor to look at the relationship between diabetes and cognitive dysfunction.

Under her direction, the Israeli team at Sheba looks to figure out which domains of the human experience are affected by diabetes, and what mechanisms create disease and loss of function.

How does the center work?

Anyone aged 60 and up with diabetes can come in for an evaluation. This is followed up with an appointment to get individualized recommendations from the staff regarding dietary and lifestyle changes and managing medications for other diseases.

Eye and kidney examinations are standard for people with diabetes, but this new center works to identify clinical stages for intervention on issues people might not be aware about.

“We put an emphasis on sleep, depression and sexual function. The effects have a lot to do with hormone profiles and other issues,” Cukierman-Yaffe says.

“However, people should understand that there are no miracle cures. We provide a way to survey the disease over time and try to slow the rate of the decline of cognitive function.”

In some cases, rehab may be possible.

“In Israel, one of the good things is there is a lot of experience in cognitive rehab of traumatic brain injury because of the army,” she says.

Given that most of the world’s diabetics do not yet have their own Center for Successful Living with Diabetes, one must ask: If there are three things a person with diabetes can do to keep their mind fit as they age, what would they be?

For more on the Center, see http://www.sheba.co.il/Institutes/successful_aging_with_diabetes