A Uniper Care user interacting with her physician through the television. Photo: courtesy

How do you create the world’s largest virtual retirement community? With Israel technology, of course.

That’s what Uniper Care is doing, although technology may not be the right word, CEO Rami Kirshblum tells ISRAEL21c. “It’s a technology-enabled service.”

Uniper is all about providing content – live and prerecorded – via its set-top box for TVs and its app for mobile phones and tablets. The technology delivering that content is fairly standard.

What kind of content? Yoga, Zumba and all manner of exercise sessions; lectures on healthy eating, mindfulness and positive thinking; interactive games to boost cognitive functioning; a virtual book club; armchair travel and more, personalized for the individual user.

What happens if a WhatsApp comes in while you’re in the middle of downward dog? No worries – the yoga video you’re watching will be paused so you can talk to your family or friends freely. No more searching for the TV remote control so you can take the call.

The latter is a key selling point: Uniper is an all-in-one solution. For its target audience of seniors, a single application controlling everything from video chat with friends to tele-health with the doctor breaks down technology barriers and assists in what Kirshblum says is the biggest problem of all facing retirees: loneliness. 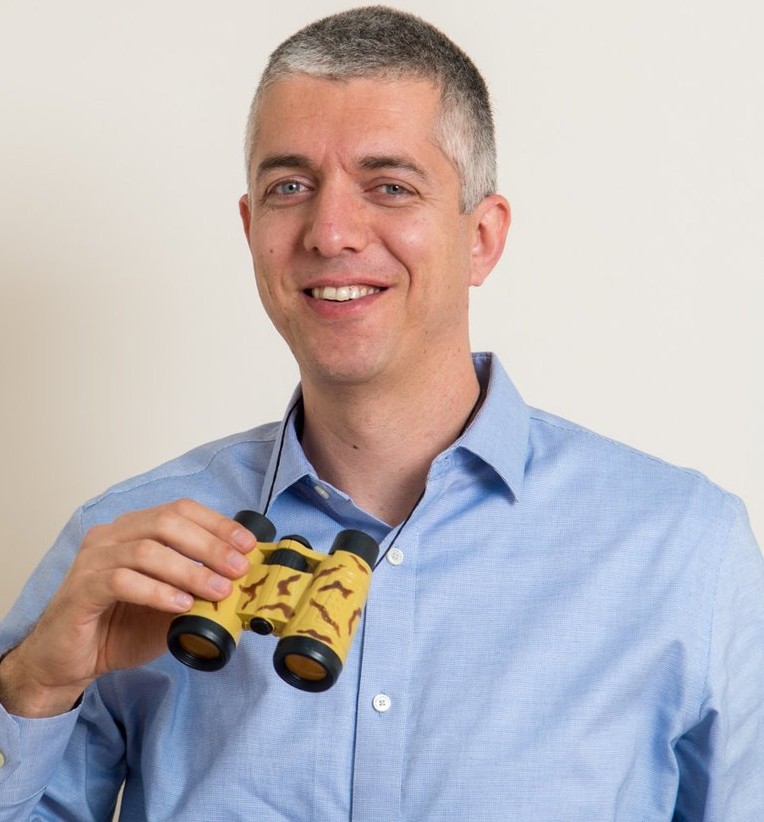 “I lived in New York for seven years,” Kirshblum tells ISRAEL21c from Uniper’s office in Tel Aviv. “So did my brother at the time. I remember traveling back to Israel to visit my grandmother. Every day she was sitting in the same spot on her balcony alone.”

Kirshblum suggested she consider moving to a retirement home.

“That notion of how to take the best of senior living and make it work at home was the seed of Uniper Care,” Kirshblum says.

It’s also a far less expensive approach – for both the senior and the healthcare system. The average cost per day for assisted living is $133 according to the most recent Genworth Cost of Care survey. For nursing care in a semi-private room, it’s $247 a day.

The cost for Uniper Care’s system: just over a dollar a day (or around $35 a month).

That’s made Uniper’s approach attractive for HMOs and governments. Uniper has thousands of seniors already using its system in the United States and Israel. The content is in Hebrew, Russian and Arabic for Israel; English, Spanish (and soon Mandarin) for the US.

Kirshblum describes what Uniper is doing with the city of Sderot in Israel.

The municipality and the Israeli Ministry of Welfare first identify seniors who fit their eligibility criteria – homebound individuals who might only get out to a senior center a couple of days a week and might be forced to miss activities due to illness, bad weather or transportation.

Next comes a visit to the senior’s home to install the system. Most of those are the set-top boxes, which plug into a TV with a simple HDMI cable. A camera is mounted on the top of the TV; the Uniper Care remote has a built-in microphone.

A Uniper broadcasting kit is also installed in local community centers. Communication with other Uniper users around the country is enabled.

After a short training session, the senior can start enjoying Uniper’s content and begin video chatting with friends, family and physicians.

A survey Uniper conducted with participants found that 81% reported a reduction in feelings of isolation; 95% said they were more connected to their senior community center; 70% described their social life after using Uniper as more well-rounded; 88% believed Uniper had improved their quality of life; and 97% said they didn’t need any assistance to successfully operate the system.

Uniper Care is working with the Maccabi HMO in Israel and recently started a pilot with a second HMO, Clalit. The venture capital arm of Israeli senior community chain Mediterranean Towers invested in Uniper and has deployed the system as well.

In the US, Uniper clients include managed care organizations, affordable housing groups, Jewish Family Service agencies and assisted living facilities as well as the US Department of Veterans Affairs.

Individual users will be added eventually. For now, healthcare and government partnerships are central to Uniper’s business strategy, Kirshblum says. 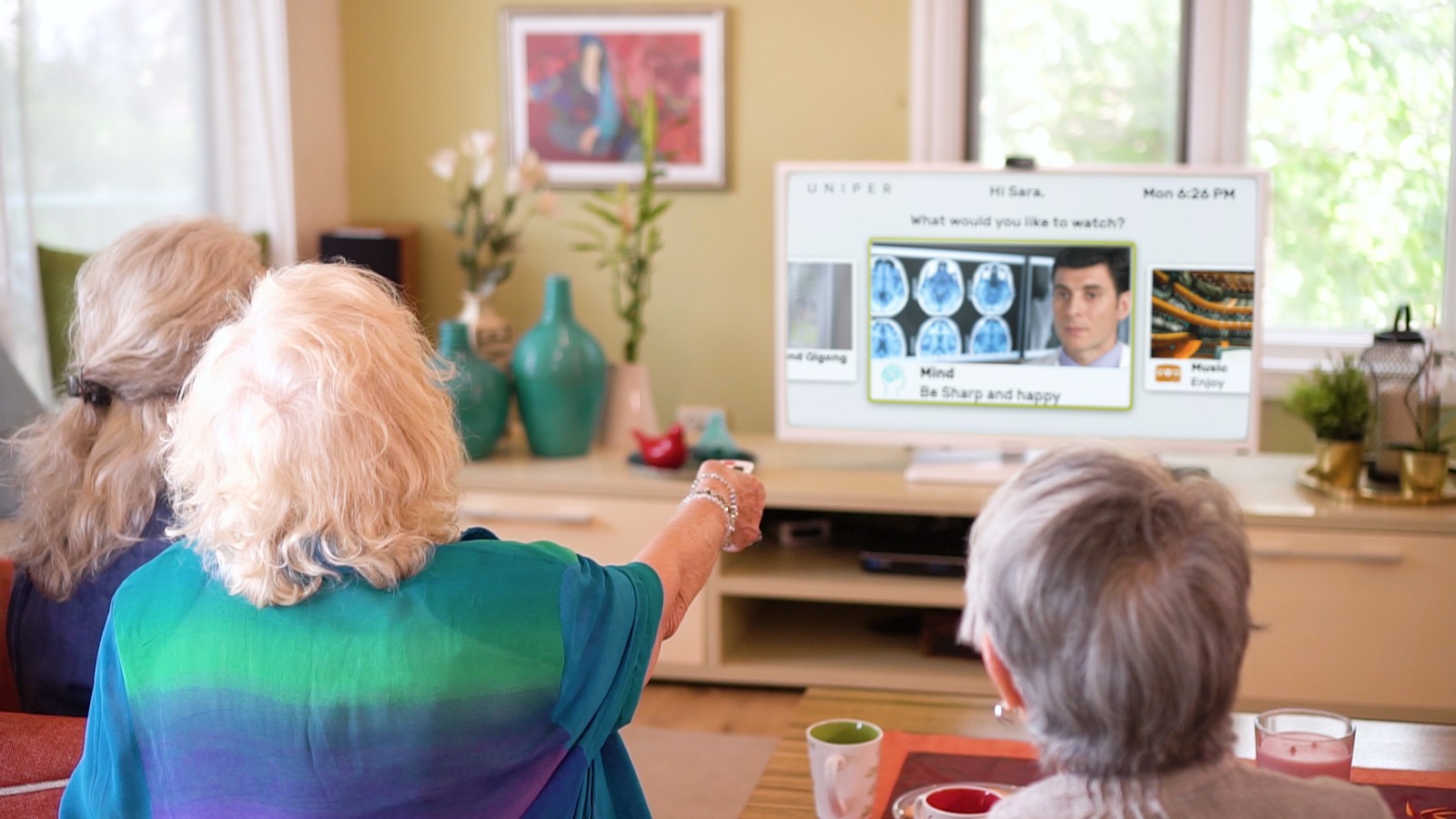 Uniper Care offers a library of content, and customers add content for their own users. Photo: courtesy

Uniper allows its partners to monitor users from a central dashboard. Kirshblum showed us a Google Map with red pins indicating seniors across Israel who reported that “they would like to be more socially active.” That allows the partner to be more proactive in reaching out to vulnerable members.

The AARP and Oxford Economics estimate that the US “ageing economy is worth $7.6 trillion, roughly 40% of the country’s GDP. As a result, Uniper is far from alone in addressing seniors at home.

But other companies either focus on technology – an Amazon Echo smart speaker, for example – or a physical service. Kirshblum is a fan of Papa, a US service that lets seniors “rent” grandkids to help with companionship and everyday tasks. Element3, which runs a network of in-person clubs, has added a virtual component.

Uniper doesn’t aim to replace brick-and-mortar health and senior centers “but to augment them,” Kirshblum says. That will be even more critical in rural areas where seniors don’t have good access to healthcare, social or nursing-care options.

Kirshblum emphasizes that Uniper is not just Netflix in a more accessible package. “We don’t provide entertainment. We are promoting an active lifestyle and preventive care at home. Netflix is passive. It actually increases your loneliness.”

Covid-19 has, not surprisingly, been “a huge accelerator” for digital businesses like Uniper’s, Kirshblum says. “What was supposed to happen in five to 10 years is happening now in one to two years. I think it will stay like this even after the pandemic.”

Uniper Care, which employs 40, raised $4 million from Silicon Valley angel Oren Zeev in January, bringing its total funding to $7 million from Israeli and the American investors.

The timeliness of Uniper’s mission is perhaps best summarized in the recently released Together: The Healing Power of Human Connection in a Sometimes Lonely Work by former US Surgeon General Vivek Murth, who writes that loneliness is a “root cause and contributor” to many of the epidemics sweeping the world today.

But with that awareness come creative solutions, Murth stresses. Solutions like Uniper Care.