Could a protein encoded by human immunodeficiency virus (HIV) provide a novel treatment for cancer?

Ironic though it may sound, a recently developed and patented product from the lab of Prof. Emeritus Moshe Kotler and Dr. Roni Nowarski at the Hebrew University-Hadassah Medical School seems to do just that.

A peptide derived from the HIV “Vif” protein increases the vulnerability of cancer cells to radiation and chemotherapy, as Kotler and his four PhD and post-grad students describe in scientific detail in the new issue of the American Society of Hematology journal Blood.

Kotler explains to ISRAEL21c that his group investigates cellular proteins that are effective in combating the HIV-1 virus. One of these proteins is APOBEC3G (A3G for short), which is neutralized by Vif.

A couple of years ago, the researchers turned their attention to the physiological functions of A3G and found that it’s involved in repairing DNA damage from radiation.

They discovered that not just the Vif protein but also a small peptide derived from Vif inhibit A3G, keeping broken DNA strands from knitting themselves back together.

This is of significant interest to the war on cancer. While cancerous cells, such as lymphoma cells, cannot be vanquished unless their DNA strands are broken apart, the reparative action of A3G makes this task tough. 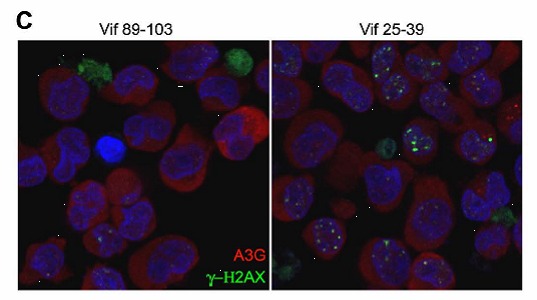 “After DNA damage, cells can survive,” says Kotler. “In therapy, you are trying to kill the cancer cells, and the Vif-derived peptide neutralizes this protein [A3G] so that radiation or chemo can be very effective.”

And in fact, when they applied peptide 25-39 to cultured lymphoma and myeloma cancer cells, it weakened their resistance to radiation.

No expected side effects

Kotler believes that a treatment based on the peptide would not give cancer patients significant negative side effects, because this would be a closely targeted treatment.

The compound has been patented by Yissum, the university’s technology transfer company, and introduced in July in the hopes of finding an appropriate partner to further develop and commercialize the product.

“According to the CDC, in 2010 cancer was the second leading cause of death in the US, slightly surpassed only by heart disease,” commented Yaacov Michlin, CEO of Yissum. “Therefore, there is a great need for more effective, targeted treatments, with fewer side effects. The treatment invented by the Hebrew University researchers holds great promise as a new biological treatment for cancer.”

Now the search is on for an investment partner. “I hope it will be commercialized very soon,” Kotler says, realizing it could make a major difference in many lives.

In the meantime, he and his researchers are fine-tuning the compound to make it usable on a practical scale. “The theoretical base is very strong, but to move it to a practical base is our main effort now,” he says.